93: The number of days until football season. See also: the number of yards Baylor's 2014 offense will gain in their first 20 seconds of possession.

Waiting is a terrible thing. For 93 days, Baylor football fans will build up anticipation for the first game of the 2014 season and the first broadcast from McLane Stadium. I drove past the stadium yesterday, and it looks incredible. I have no doubt that it will be in great condition by game day. We'll touch on yesterday's softball and track news in a moment. For right now, here's some tidbits about McLane Stadium and football season in general:

McLane Stadium construction is chugging right along, and we're now seeing pictures of the work being done on the inside of the stadium. Many of these are on paid sites and I can't share them here, but the few that we've seen that are available to the general public are fantastic.

These tweets show the ceiling of the home team locker room, which matches earlier art perfectly. The outside of the stadium looks stunning as well. As good as campus will look from your seats inside that canopied horseshoe, there's also something to be said for the way the stadium looks from campus. From my dorm room last year (fourth floor of Alexander) I could see the top of the canopy rising in the distance. This stadium will be a landmark that my children and my children's children will associate with Baylor University. It will be the first thing they see when they get to Waco, and the last thing they see when they leave.

That one time the sun makes everything beautiful... 94 days and counting @McLaneStadium pic.twitter.com/lHN6MK6e27

Also, check out this gif of the beginning stages of field installation, courtesy of BearsTruth's Brian Ethridge (forgive me if the image originated with someone else and I've neglected to give proper credit):

Baylor is hosting two camps in the immediate future, on June 1 and June 8. Quite a few big names from around the region will be in attendance, including several 2015 Baylor commits. Some of the highlights include 2015 QB commit Chad President, new MLB commit Breckyn Hager out of Westlake. Future targets include Palmetto, Fl. QB Jack Allison, a great football name if I ever heard one, and 2016 Sachse CB Jared Mayden among others. The cams could bring new recruits, or they may just lay the groundwork for future classes.

It's never too early to start picking apart schedules around the Big 12, so here's a cursory glance at Big 12 non-conference play:

FCS champion NDSU is a tough football team, and should not be overlooked despite their less prestigious classification. They have the respect they deserve in the Big 12 after stunning Kansas State in last year's season opener. ISU fans shouldn't feel comfortable about this one, but if Paul Rhoads' team improves this year in the ways I expect them to, the tough Ames atmosphere should help them put the Bison down for good.

Ooooh, gurl. This one could be good. I personally expect Oklahoma State to take a step back this year, but if J.W. Walsh has matured, Oklahoma State's speedy offense could give the Noles more than they want to deal with. I predict an FSU win, but Mike Gundy can coach with the best of them, and the game is set squarely in the middle of Big 12 territory. Look for this one to stay close as Jameis tries to kickstart a repeat Heisman performance.

If you feel completely comfortable going into a big night game in Manhattan against a motley crew of junior-collegians-turned-Snydercats, you're either lying or a fool. Bill Snyder has spent centuries warding off spread offenses in the Big 12. He gave a comparable Baylor attack fits just last season. Much like FSU-OSU, I don't expect K-State to win this, but I expect them to make it very, very interesting. Tyler Lockett will probably be good for a special teams touchdown. A win here would do wonders for the perception of the Big 12 against the SEC.

I lived in Knoxville for a couple of years, and my grandfather bleeds Vol Orange. These days, Tennessee fans are looking for anything to feel good about, and I think that the program is looking up under Butch Jones. I don't think a season-defining moment happens in Norman. Tennessee just isn't good enough to hang with the Sooners yet, but if they can develop their skill player and find consistency at QB, they'll have a shot down the road.

I'm not sure what to think of Gary Patterson's attempt at a spread offense this season. If someone clicks at QB and Trevone Boykin settles in at WR, they can score some points. This one will be a slugfest between the power run offense of Big 10 contender Minnesota, and the eternally tough Patterson defense. Game of Thrones tells us that bad things happen when northerners come south. Here's to hoping.

By this point, the Stronghorns will likely have dispatched North Texas and BYU. UCLA, picked by many as the favorite for the PAC-12, sports a Heisman candidate in Brett Hundley and a very balanced team. If Texas beats UCLA in JerryWorld, it will send a message to the college football world that Charlie Strong is not to be trifled with. David Ash might still be playing at this point in the season.

Softball was run-ruled and lost to Florida, 11-0. It was ugly, and Coach Moore went as far as to say it was the ugliest game he's been a apart of in four or five years. Whitney Canion took a seat and let Heather Stearns pitch to end the game, and what seemed like a dozen Baylor home runs bounced off the wall into the waiting arms of Florida outfielders. Poor play and terrible luck set back the Lady Bears' hopes for a national championship considerably.

Things went much more smoothly for the Baylor Track and Field team. The first day of the NCAA West Preliminaries saw seven Bears advance, including two men's 100m sprinters. Trayvon Bromell and Everett Walker placed first and third in their respective heats, and Bromell had the second-fastest time in the nation with a 10.18. The freshman left his competition in the dust:

Junior Tiffani McReynolds qualified in the women's 100m with a time of 11.73. Freshman TJ Holmes advanced in the men's 400m hurdles with a 50.35, the second best qualifying time in the event. Senior Mariah Kelly won her heat in the 1,500m, and junior Raena Rhone will have the opportunity to run for a bid at the national meet after finishing fith in her heat in the 400m and advancing based on time. The action in Fayetteville continues today. 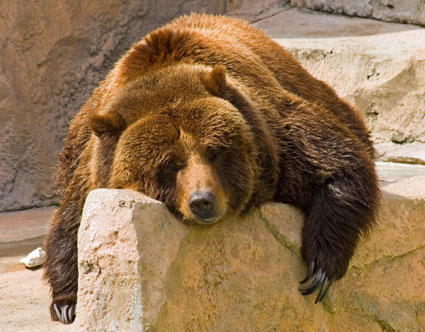