It's another full slate this Saturday in the Big 12 Conference with all 10 teams in action. The Baylor/Texas Tech game is the only night game so let's take a look at the rest of the games on Saturday afternoon. 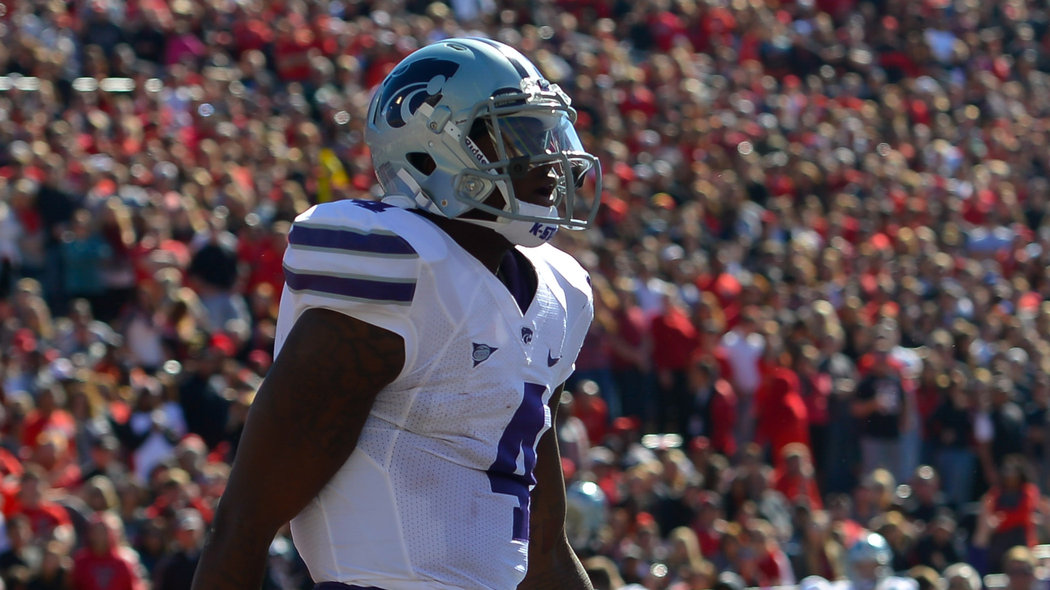 Oklahoma is back home and reeling after the bludgeoning at the hands of Baylor during last Thursday's #BlackOUt (alliteration ftw). Bob Stoops has had to answer a lot of questions this week about the struggles of his offense and specifically the quarterback play from Blake Bell and others. The Sooners will look to bounce back at home against an Iowa State team coming off of yet another gut wrenching last-minute loss at home. It seems as though they've had 3 or 4 of those this year. Oklahoma will try to re-establish a running game that has had its share of success this year but had trouble getting on track last week. Iowa State has been susceptible to the run defensively and will need to strong in that regard to have a chance to hang around in this game. Quarterback play will also be crucial for the Cyclones. Whether its Sam Richardson or Grant Rohach, Iowa State will need to convert on 3rd downs against a strong OU secondary to maintain possession. In the end, I think Oklahoma at home will be too much for the Cyclones to pull the upset but I don't think the Sooner offense has the consistent firepower to cover the 24 point spread.

The fact that West Virginia is only a 7 point favorite in this game should tell you all you need to know about the 2013 Mountaineers. After a wild overtime loss last week at home against Texas, WVU now has their backs against the wall needing to win their final 2 games in order to qualify for a bowl appearance. Standing in their way is Kansas, losers of 27 consecutive Big 12 contests. The Jayhawks have for the most part done a solid job of keeping games close in the 1st half thanks to an improved defense but have struggled mightily to maintain any consistency on offense. I think West Virginia comes in with something to prove, gets a big game from Charles Sims, and marches through KU for an easy win. Besides, if you tell Kansas fans that there is a game on Saturday afternoon in November, they will immediately begin camping outside of Allen Fieldhouse.

The obvious game of the week this week not involving Baylor is the showdown in Austin between Oklahoma State and Texas. This is a critical game for the Big 12 championship aspirations for both of these teams, especially for the Cowboys. OSU is playing their best football of the season at the right time, with just a late September blemish in Morgantown to their record. Texas has (somehow) managed to get through their first 6 conference games unscathed, but will have to go the rest of the season without starting DT Chris Whaley and star RB Johnathan Gray. The loss of Whaley comes at a bad time for the Longhorns against a resurgent Oklahoma State rushing attack, led by Desmond Roland. It will be key for Texas to control the clock and establish Malcomn Brown and Joe Bergeron in the running game if they want to stay perfect in Big 12 play. The less that Case McCoy is forced to throw against a talented Cowboy secondary, the better the Longhorns chances are in this one. Despite the home crowd not being in their favor, I expect Oklahoma State to establish a lead and make Texas play from behind. This time, the Horns won't be able to come all the way back.

The Big 12's most resurgent squad, Kansas State, returns to Manhattan to try and extend their 3 game winning streak. The Wildcat turnaround has been sparked by an improved running game and a sound defense, a.k.a. SNYDERBALL 101. K-State was able to gash Texas Tech for 291 yards rushing on 45 carries in last week's blowout win over the Red Raiders. TCU will provide a much more difficult test against the Wildcat ground game as the Horned Frogs boast one of the best defenses in the conference. The problem for TCU all season has been their inconsistent offensive performance, partially due to injuries but also a lack of execution. Casey Pachall's return at QB has helped matters a little bit but the Frogs still needed a last minute touchdown to put away 1-8 Iowa State last week. Like West Virginia, TCU is sitting at 4-6 and needs to win its final 2 games to become bowl eligible. The problem for them is that they have Kansas State and Baylor left on the schedule. The Snydercats are playing extremely well-rounded football right now and I don't see TCU putting a stop to it. K-State rolls at home.