Looking ahead to this weekend's Big 12 games that don't involve a certain team wearing green and gold. 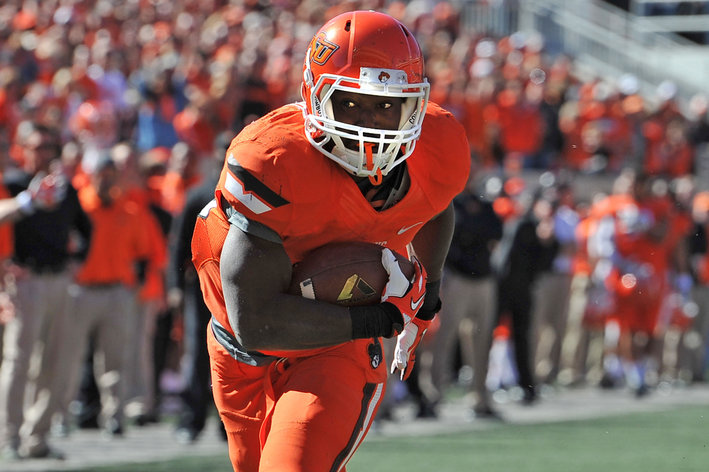 Another week, another new #2 for the Big 12 Conference according to F/+, the combined FootballOutsiders metric for overall strength in college football.

Note: Fankhauser is on special assignment this week and is attending the Kansas game. You're stuck with Seymour to fill in on the Big 12 preview. Please don't hurt me if I screw this up.

The entire conference is in action tomorrow beginning at 11:00 with OSU-ISU and ending with the Baylor-Kansas and TCU-UT games tomorrow night.  Before we even kick off, we'll know more about the Big 12 than at any previous point this season.  I'm excited.

Fresh off their strangling of the half-dead TCU offense a week ago, the Cowboys of Oklahoma State travel to Ames this week for a matchup with the now 1-5 Cyclones.  OSU is the heavy favorite and for good reason: their defense is probably the best in the conference and to say ISU has problems on offense would be an understatement.  J.W. Walsh should get the start for the Cowboys, but don't be surprised if you see Clint Chelf come into the game at some point should the Walsh-led offense sputter.  In fact, when I looked over at CRFF to see what they thought, quite a few predicted it will be Chelf leading the team out, not Walsh.  Mike Gundy is either conducting some kind of psychological experiment on what his QBs can endure or just screwing with everyone.  There's really no way to know.*

*Except now there is. It will be Chelf.

The Cyclone faithful have to be hoping that Sam Richardson is healthier and more capable than he was a week ago, when the Baylor defense knocked him around until he eventually gave way to Grant Rohach, who wasn't much better.  They'll lean heavily on Aaron Wimberly, a strategy that seems both totally logical and destined to fail.  OSU has one of the best run defenses in the country, and they will make short work of the ISU front.

Fank has this game as a close one, well within the 17-point spread.  I'm becoming more and more convinced he's probably right.  ISU has a significant edge in special teams, is playing at home, and will try as best they can to keep the game close.  OSU has offensive problems galore and no sure starter at QB.  I think OSU will win, but I'm going to reverse myself from last night and take the points.

This is the game that we've all been talking (and writing) about all week. The debate over who to support has raged across the Baylor section of the internet, with some hoping for an undefeated matchup at the Deathstar in November and others wanting OU to bring the Red Raiders back down to Earth.  With the news today that ESPN might, after all, consider an undefeated Baylor-Tech game for CFB GameDay, I'm now firmly on the other side.  It hurts to say it, but I'm rooting for the red and black.

As for the game itself, the second-best pass offense in the Big 12 (second-best offense overall, actually) will meet the best pass defense tomorrow in Norman when Kliff Kingsbury's troops take on the Sooners.  We don't yet know who will start at QB for the Red Raiders; the Solid Verbal guys talked all about Davis Webb in their show Wednesday night, but I've seen popular support for Baker Mayfield, as well.  It probably doesn't matter.  The offense is designed to do what it needs to do with the QB serving mostly as a distributor.  Most of their job will be to find Jace Amaro, anyway, and I'm pretty sure both of those guys know who he is already.

The key for Texas Tech will be to avoid being totally one-dimensional.  Texas challenged OU's front with a dominant rushing attack.  Kansas tried the same thing last week to limited success.  If Texas Tech tries to throw the ball every down at the expense of the running game, the secondary of OU could have a field day.  If they can run the ball better than they have been (70th in rushing S&P+), their chances go up considerably.

OU has the opposite problem, being able to run generally and not pass.  It seems the Blake Bell early season passing mirage was just that, and he's fallen to Earth hard in recent weeks.  Tech's defense has improved this season in the absolute stats, but they haven't played any of the conference's top offenses and still look vulnerable, especially through the air.

Is this the undercard of the conference's day tomorrow?  It seems like it.  Neither team has met anything resembling their expectations this season, and now KSU welcomes the Mountaineers to Manhattan after having a full week off to prepare.  They are a big favorite in this game (11.5 points now on Oddsshark) and that spread is getting bigger.  I get it: KSU is playing at home, is better on both sides of the ball, and is coming off a bye week.  It makes perfect sense.

West Virginia will try to pull off the upset with ODB favorite Clint Trickett at the helm.  He's played basically all of their last few games and seems to have secured the starting spot over Paul Millard.  WVU will have to stop Daniel Sams and the KSU running game to have a chance, but that doesn't seem likely.  I'm taking KSU, and Fank is, too.  The Wildcats defense is good enough against the pass to give Trickett a lot of problems, and Snyder will work his magic in the stadium named for him.  I don't know if the'll win by 17 as Fank predicts, but it sounds reasonable.

Aside from Tech-OU in Norman, this is the game everybody wants to see in the Big 12.  David Ash is out-- again-- so it will be the Case McCoy show for the Longhorns at QB.  That means you should expect a heavy rushing attack from Johnathan Gray and Malcolm Brown against the TCU defense, which is still quite good.  Mack Brown won't give Jason Verrett and the TCU secondary a chance to clean up Case's mistakes, so he will run early and often, hoping to establish the same kind of running game that dominated OU two weeks ago.

This game could also see the return of Casey Pachall, who has apparently been cleared to play after missing the last five games with a broken arm.  There's even some talk he could start for the Horned Frogs.  I'm not buying that at all, and I would be surprised to see him.  Trevone Boykin will get the nod running an offense for whom "lifeless" would be a compliment and will probably spend the majority of his time handing off to B.J. Catalon and running the ball himself.  This is the same Longhorn team that was gashed to death by Taysom Hill and the BYU running game, and I guarantee you TCU has studied that film extensively.  The play of UT's front seven, particularly defensive ends Cedric Reed and Jackson Jeffcoat, will be critical, as will that of much-maligned linebackers Dalton Santos and Steve Edmond.

I'm going with Fank on this one-- Texas wins.  I don't understand a line that has TCU as the favorite in this game given their offense.  Sure, the defense is good, but at some point you have to score points.  TCU doesn't do that nearly enough.  Texas will run the ball effectively enough to keep drives going, and Case will put out a play or two that shouldn't work but does and make you hate him all over again.  He's like a less-talented, somehow similarly douchey Johnny Manziel.