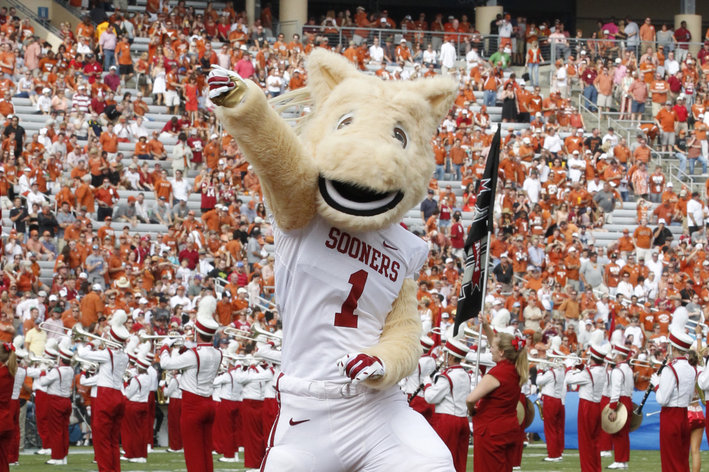 After Texas put a beatdown on Oklahoma last weekend, you might seriously want to just forget everything you thought you knew about the Big 12 in 2013. But it's always fun to think we know how things are going to play out, right? Here's a look at the Big 12 slate on Saturday.

Note: Kansas State and Texas are off this week. Texas returns next week on the road against TCU, while Kansas State gets West Virginia at home.

TCU travels to Stillwater for the second straight year in what can probably be considered the game of the week in the Big 12 this weekend. Both teams are in need of a win that would keep them at least in the conversation for the Big 12 title. TCU is coming off of a rather uninspiring 27-17 win at home against Kansas last week. As strange as it sounds, the Frogs have probably looked better in their 3 losses away from home than they have in their 3 home wins against lesser competition. It’s a team that isn’t afraid of going on the road but Oklahoma State has been really salty at home the last 3 seasons (14-1). The Cowboys are looking to reignite an offense that was expected to be one of the league’s best but hasn’t been impressive in their first 2 Big 12 games. Since a 24-for-27 game at UTSA on 9/7, J.W. Walsh has only completed 53% of his passes over his last 3 games. OSU has also had its fair share of problems running the football as well. All of this doesn’t bode well against a strong TCU defense. But there is a reason why the Horned Frogs are only 3-3 through the first half of 2013: their offense has been downright sad. TCU ranks 100th in FBS in passing yards and 92nd in rushing, which is good enough for 109th in total offense. The Frogs are going to need to rely on their running game and limit their mistakes to have a chance to leave T. Boone with a win. I see this game turning into a bit of an ugly slugfest. The recipe is there for a turnover filled game with erratic quarterback play and opportunistic defenses. In the end, I think Oklahoma State is too good at home and they hold off TCU.

Texas Tech tries to remain undefeated as they hit up them country roads to take on West Virginia in Morgantown. This is likely to be the toughest test that the Red Raiders have faced to this point in the season. West Virginia has been disappointing in 2013 but ask Oklahoma State how easy it is to walk into Mountaineer Field and come out with a win (hint: they didn’t). Tech will likely look to Davis Webb to start the game at QB after a 415 yard, 3 TD performance last week against Iowa State that earned him Big 12 Offensive Player of the Week honors. How Webb handles the pressure of playing in an actual road game atmosphere will go a long way towards deciding Tech’s fate in this game. WVU will also be looking to bounce back from the 73 point drubbing that Baylor gave the Mountaineer defense so I expect that they will come out jacked up and ready to play. Whoever is playing QB for Tech will be targeting Jace Amaro, who has been nothing short of beastly thus far this season. WVU is also dealing with QB uncertainty and Dana Holgerson has said that he will make a game-time decision between Clint Trickett (he’s hiding somewhere) and Paul Millard. I think the big key for WVU to stay in this game is to have success in the running game with Charles Sims and Dreamius Smith. This will take pressure off the quarterback and allow the offense to establish a rhythm, something they’ve had a hard time doing. I’m really tempted to pick the upset here but I think Tech finds a way to get it done on the road. They’ll make some mistakes that allow the Mountaineers to hang around but I think they make enough plays to win the game.

Since the subject of the day seems to be mediocre QB play, it’s fitting that we wrap up the Big 12 preview with Oklahoma and Kansas. OU is looking to rebound after an embarrassing 36-20 loss to Texas that nobody saw coming. I like to think that I’ve done a halfway decent job with my picks this year but I missed that one by 44 points (I had OU 38-10). Don’t judge. But there were some glaring issues that came out of the loss to Texas last week. Blake Bell has really struggled in his last 2 games and for the season, the Sooners are only averaging 134.7 passing yards/game in Big 12 play. In addition, the Oklahoma defense which looked so dominant at the beginning of the season has been ravaged by key injuries to Corey Nelson and Jordan Phillips. Texas was able to run the ball right at the core of OU’s front 7 without any real resistance. Luckily for the Sooners, they have the rebound opponent of all rebound opponents: Kansas. Like TCU, the Jayhawks rank outside of the top 100 in FBS in total offense and are averaging just 15 points/game against FBS opponents. Since Tony Pierson went out with a head injury 2 weeks ago against Texas Tech, it’s only gotten worse for KU. In their loss last week in Fort Worth, Kansas was only able to amass 198 total yards for the game. Kansas is going to have to rely on its improved defense to force Bell into some turnovers and the Jayhawks must be able to take advantage of the opportunities that come their way. I think Oklahoma’s offensive struggles will continue but Kansas doesn’t have nearly enough firepower to make this interesting at the end. The Sooners bounce back and the Jayhawks fall to 1-35 in their last 36 conference games.

More from Our Daily Bears: