Looking ahead to this weekend's Big 12 games that don't involve a certain team wearing green and gold.

Think of this week's Big 12 games as the appetizer to the main course as all 3 other games are at 11am Saturday prior to the Baylor game at 2:30. Here is what to watch for in the Big 12 tomorrow. 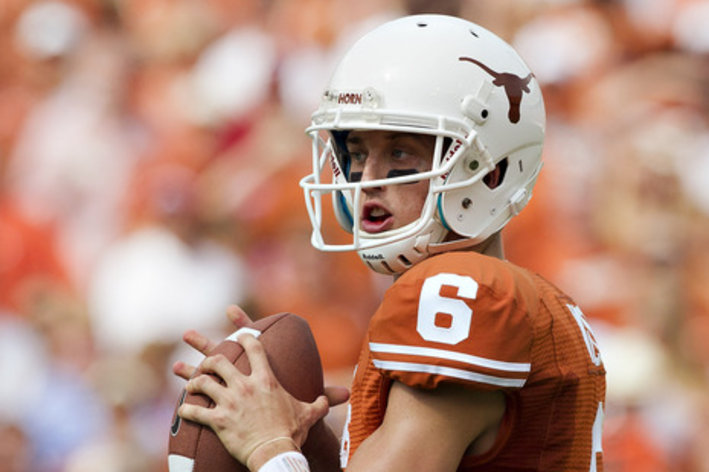 Preview from Burnt Orange Nation of Texas vs. OU

The highlight game of the conference schedule this weekend is the annual Red River Shootout in Dallas between Texas and Oklahoma. Fried nutella not included. By the way, we have it on good word from trusty ODBer Stephen T. Hart that the fried nutella is weaksauce and isn’t worth your time. On the football field, this game appears to be a giant mismatch in favor of the crimson and cream half of the Cotton Bowl. Oklahoma’s offense has been solid in the running game and averages 246 yards/game on the ground, good for 2nd in the Big 12. Does anybody know what Texas is terrible against defensively? I’ll take tackling, assignments, and anything that has to do with run defense for $200, Trebek. I expect the Longhorns to try to combat this by crowding the box and making Blake Bell try to beat a talented Texas secondary over the top in man to man coverage. It is critical that UT defenders make sure tackles in space otherwise this could be another long day for the Horns. On the other side of the ball, Texas will again be without David Ash who is still dealing with concussion issues suffered a month ago. This can only mean one thing: MOAR CASE MCCOY. And McCoy will have his hands full against a real solid OU defense. The Sooners will have to adjust to life without playmaking LB Corey Nelson who was likely lost for the season with a torn pectoral muscle last week against TCU. If Texas is smart with their playcalling (which is not usually the case), Jonathan Gray will get the ball as much as possible to put pressure on the OU linebacking core. A big game from Gray is probably Texas’ best chance of making a game of this and possibly a Longhorn victory. Oklahoma has won this game the last 2 years by a combined 80 points and Mack Brown has to know that he can’t afford another bludgeoning at the hands of the Sooners. I think Texas hangs around in the 1st half but Oklahoma wears them down and pulls away in the 2nd half to remain undefeated.

For more on Oklahoma, check out Crimson And Cream Machine, SB Nation's blog for the Oklahoma Sooners.
For more on Texas, check out each of the SB Nation blogs for the Texas Longhorns: Barking Carnival and Burnt Orange Nation.

If you’re looking for an fun ol’ Big 12 shootout, then shield your eyes because this is probably not the game for you. Both teams have struggled mightily on offense in 2013. TCU comes in off a tough loss last week at Oklahoma. The Horned Frogs 2-3 record is pretty deceiving when you realize they have lost 3 games to ranked opponents (LSU, Texas Tech, Oklahoma) away from home by 10 or fewer points. TCU has been able to stay in games this season in large part due to a solid defense with talented players both up front and in the secondary. Kansas’ task of moving the ball against the Frogs is even more bleak than normal as RB/WR Tony Pierson is not expected to play with a head injury suffered last week against Texas Tech. Pierson gives the Jayhawks a real playmaker and without him, the offense is void of talent at the skill positions. Similarly when TCU has the ball, the Frogs have had issues consistently matriculating the ball upfield since Trevone Boykin took over at quarterback after Casey Pachall’s injury. Oklahoma held TCU to a mere 210 yards of total offense last week, an unacceptable number for a team that came into the season with hopes of competing for a Big 12 title. Although the Kansas defense is improved from a year ago, they got lit up to the tune of 54 unanswered points to Tech last week after starting off strong in the 1st quarter. I think Gary Patterson will try to establish the running game with Waymon James and B.J. Catalon early to take any pressure off of Boykin and the Frogs will pick up their first Big 12 home win after going 0-4 at Amon Carter in 2012.

Texas Tech hosts Iowa State in Lubbock and is looking to improve to 6-0 for the first time since the days of Graham Harrell and Michael Crabtree in 2008. This would surely appease the homecoming crowd at Jones Stadium as well as the legion of Tech trolls on ESPN.com comment boards. The storyline going into this game is who will start at quarterback for the Red Raiders. Baker Mayfield is listed as questionable which could open the door for Davis Webb or Michael Brewer to take the reins of Coach Bro’s offense. Whoever is playing quarterback will likely be targeting TE Jace Amaro, who leads the Big 12 with 38 receptions so far this season. It will be key for the Red Raiders to avoid turnovers against an opportunistic Iowa State defense. And Texas Tech isn’t Texas so fumbles actually count this week. Iowa State has been able to find a bit of a rhythm offensively in their last 2 games, scoring over 30 points in each outing. A big factor in this has been the emergence of RB Aaron Wimberly. Iowa State will look to maintain the momentum offensively against a Tech defense which was probably been the biggest surprise in the Big 12 through the first month and a half of the season. Both of these teams need this win for completely different reasons: Tech is looking to stay in the conference title race and the Cyclones are trying to work back towards bowl eligibility for a third consecutive season. Iowa State has shown in recent years to be able to pull off a major upset and the potential ingredients are there in this game. If Texas Tech is careless with the football and lets Iowa State hang around, the Cyclones are capable of winning this game (and Paul Rhoads will be SO PROUD). I think Iowa State will cause some heart palpitations amongst the Red Raider faithful, but Tech wins it in the 4th quarter.