What the UL-Monroe Game Tape Foreshadows about Saturday

Charting the BU @ ULM game gives some insight as to the early strengths and weaknesses of this team..and perhaps if Briles is keeping a few things up his sleeve for WVU's first Big XII conference game.

Share All sharing options for: What the UL-Monroe Game Tape Foreshadows about Saturday

Something I have been wanting to do this season is to do thorough game charting in order to really understand the strengths and weaknesses of this Baylor team and see how they match up to future opponents. Unfortunately, I haven’t had the time to do this until this week for the UL-Monroe game. Fortunately, I had the time to do it this week for the UL-Monroe game.

While it takes quite a bit of time and effort to do, the amount of data that can be gathered is immense. Some of it falls under trivia, but much of it does not. Unfortunately, as this is the first week I’m doing it, I can’t tell you if any one aspect is an outlier from what we do week to week. Realistically, Briles & Co tinker with the game plan each week, so I doubt anything would transfer forward perfectly. However, it can give us insight into the underlying principles of the 2012 Baylor Bears, which should be helpful prospectively.

Due to the large amount of data, I’m going to try to distill out a few salient points and highlight them with charts or graphs.

Is Baylor’s offense too predictable?

One of the things that Mark and I have talked about is whether Baylor has been holding things back for the start of conference play. We’ll get to the defense in a minute, but first let’s take a look at the offense. Remember, this is based off of a small sample size. That doesn’t matter quite as much for 1st and 2nd down because there were 45 and 30 plays run, respectively, on those downs. For 3rd down, it gets a little bit more dicey, with just 17 plays total and no plays that counted on 3rd and long. Notice I said counted. That’s because last week’s game had the happy peculiarity that on all three 3rd and long plays, ULM committed an offsides penalty. Get a little too excited a little too quickly, ULM? 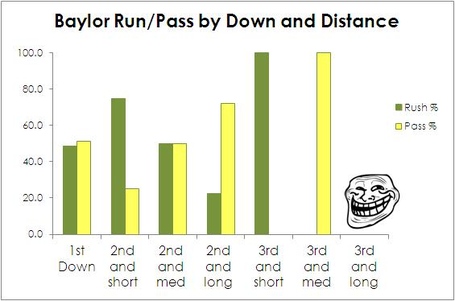 Anecdotally, I felt that Briles was a bit pass-heavy on first down against Sam Houston State. When the passes were completed, it resulted in first downs or easy conversions, but their failures resulted in some difficult 3rd down conversions. Fortunately, even if that anecdotal recollection is true, Baylor was quite balanced on first down against ULM. Looking at 2nd and 3rd down, broken down by yards to go, we see Briles ended up calling an incredibly rational game. With 1-3 yards to go, Baylor ran the ball an overwhelming majority of the time. As the distances grew, we see the distribution change in stepwise fashion.

All of this suggests to me that Briles did not feel the need to take any risks against ULM on offense. Note, this it not the same as saying Briles did not feel the need to be aggressive. Long touchdown passes, consistently going to the intermediate and deep passing game, and the up-tempo approach that we’ve grown accustomed to were all there. But this chart looks almost too rational, even with the small sample size.

One of the signs that this rationality lead to predictability is the struggles Baylor had rushing on first down. As shown by the chart below, our best rusher on 1st down ended up being Nick Florence. Salubi and Martin had 6 and 8 attempts, respectively, but Martin consistently gained 0-3 yards and Salubi was hit or miss. 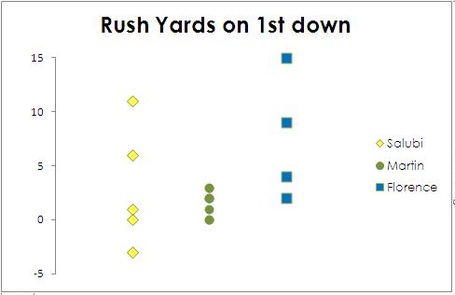 This isn’t an argument against being balanced on first down, but rather a desire for more effective rushing on first down. I’m sure Briles desires this as well, but unlike me, he can actually do something about this. That something I suspect involves taking advantage of those WR we saw in motion or other more non-traditional approaches. Given the amount of passing that we’re still likely to do on 1st down, Salubi’s combination of pass blocking and jack of all trades capability means he is likely to be on the field, so perhaps more zone read with Salubi and Florence is the answer.

How did Baylor do against the schemes that they are likely to see Saturday?

Mark mentioned in his preview that West Virginia has shown a 3-4/4-3 hybrid as their main defense and mixed in some 4-2-5. ULM formations were a little bit difficult to chart because their base 3-3-5 could easily turn into a 4-2-5 or occasionally a 5-1-5 or 5-3-3. While ULM’s insistence on throwing defenders at the LOS (and beyond) resulted in some early struggles for Florence and struggles rushing up the middle, it was also their downfall in that it left their DBs in single coverage against the single best unit on the 2012 Baylor football team – it’s wide receivers.

ULM didn’t put 4 LB on the field at once that I saw, but they did run a fair bit of 4-3 and 4-2-5. The yards per attempt (rushing or passing) look similar in comparison to how they did overall, with perhaps a bit of a dip against a 4-3 as measured in 13 total snaps. It should be noted that Florence’s completion percentage was 71% against the 4-3 compared to 66.7% against the 4-2-5 and overall against ULM. All in all, I don’t think there’s anything to suggest that we are more susceptible to these schemes than what we’ve seen so far. 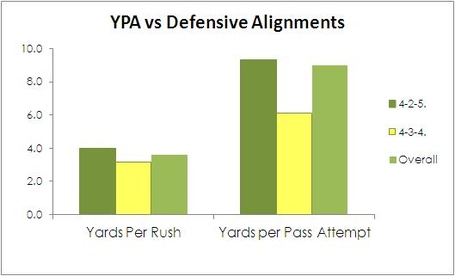 For those curious, I’ve charted the offensive formation that Baylor ran against these formations. The numbers indicate #WR / #RB / #TE. The "Other" category is evenly split between the empty backfield, 5 WR sets and 3 WR, 1 RB, 1 FB set.

What is Baylor likely to run on defense?

Again we come back to the question of how much Baylor has been restricting their playbook in order to have a few tricks up their sleeve for conference play. In the first game, we saw Baylor’s defense spend much of their time in the new 3-4 defense that they implemented over the offseason. Unfortunately, both in that game and in the Sam Houston State game, the usage of 3-4 and 3-3-5 defenses resulted less in the crazy and myriad blitzing schemes that Mark and I had pictured and much, much more dropping 8 guys into coverage. Against ULM, we did see some 3 man fronts, but spent most of the night in a 4 man front. 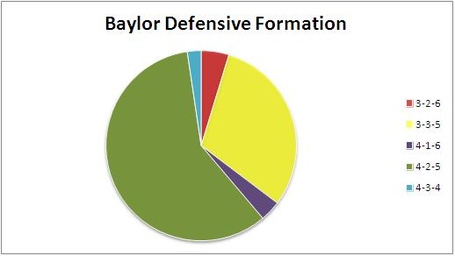 As for blitzing, by my count we blitzed 8 times out of a total of 85 potential opportunities to do so (9.4%), however 2 of those blitzes were sending 1 extra LB in a 3-3-5 set, which results in the customary 4 rushers and is only tenuously called a blitz. Even ignoring these Diet Coke of Blitzes, most of the blitzing did occur in the 3-3-5 set. Bennett only decided to blitz twice out of 4-DL fronts. On these plays, ULM went 2 for 6 for 33 yards with 1 sack and 2 rushes for 8 yards.

While this was more blitzing than I noticed in the first two games, I’m not sure that this is the first step towards a blitz-happy defense. I find it hard to believe that we’re going to implement a similar game plan against West Virginia that Maryland did last week, despite its decent efficacy, because Bennett has played his defenses relatively straight up since coming to Baylor (and perhaps before, I am unaware). We did stunt our DL a couple of times and it wouldn’t surprise me if we tried to do this more, especially if the WVU rushing attack is deemed to be manageable (and it seems that most expect that to be the case).