Baylor AD Ian McCaw went on Smoaky's radio show (1660 ESPN on your AM dial) in Waco yesterday, revealing an intriguing bit of information related to the construction of both Baylor's new on-campus football stadium and the track facility to be located nearby.

Share All sharing options for: A little Baylor Stadium news...

We've known for a while now that Baylor intended to, and eventually would, build a new track facility near campus as it vacated all current holdings off Valley Mills in Beverly Hills, but until recently we didn't know exactly where it would go. There was some speculation, based mostly off the overhead renderings of the stadium and surrounding areas, that the track facility would be built "next" to the stadium site across the narrow waterway to the east, directly adjacent to La Salle Boulevard. (Because I'm awful with MS Paint and don't have Photoshop on this computer, I can't delineate the space I'm talking about. But it's the uncleared area to the ESE of the part shown in the rendering above. Check the picture below.) That is apparently not the case. 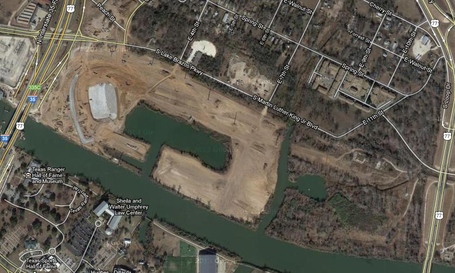 According to McCaw, the facility will actually be built directly across the river from the existing Highers Athletic Complex, putting it west of the assumed location and on land that was originally intended for intramural fields and tailgating areas. Some Baylor fans have reacted negatively to this news because they don't like change, some think this will detract from the tailgating scene at the new stadium, and some (like me) are wondering why the facility need be so close to the football stadium at all.

Whatever the reason, it appears that we'll wait for new renderings and/or plans to come out so we can know what to expect. Just based off the footprint of the stadium from the picture above (and I'm talking about the gray inner, roughly football-field shaped area that is obviously going to be slightly bigger than a football field would be), it looks like a track would fit on the peninsular-like area to the southeast, but I'm no engineer. Using the scale on Google Maps, where I got the screenshot in the first place, it seems that area is about 1000 x 400 feet, but again, I'm just guesstimating. Someone on Baylorfans made a better image to judge by superimposing our existing facility on the space, but I have no way of knowing if the scales are the same or what shape the new complex would be (other than that it has to have a track, obviously).

What do you think?

PS. In case you haven't been by there in a while or don't get to Waco often, the stadium isn't just a hole in the ground anymore. There are actually dozens of columns and support beams rising from the earth already!

UPDATE: I actually spoke to someone in the AD last night about this and was told that the location of the track stadium will be the bricked portion in the rendering above originally intended for RV tailgating and the like. The AD intends to create tailgating sections in other areas, particularly for students, to make up for the lost space. On the cleared picture I put in the post itself, it's the area directly adjacent to the water just north of where the peninsula turns and runs west. Does that make sense? The real takeaway is that the intramural fields will still be there, apparently. The track facility will be between them and the parking lots.