Students -- Tyus Jones and Jahlil Okafor are on campus TODAY

ATTENTION BAYLOR STUDENTS: It's Friday. I know you're ready for the weekend. But you might see two very high-profile recruits on campus this weekend, and I want to make sure you know who they are.

Share All sharing options for: Students -- Tyus Jones and Jahlil Okafor are on campus TODAY

We've been reporting for the last few weeks/months that today is quite the important day for Baylor MBB recruiting, and it has now finally come.  Top 10 recruits and supposed package combo C Jahlil Okafor and PG Tyus Jones should be on campus TODAY.  Okafor arrived last night to at the Waco airport and was greeted by Baylor coaches, and Jones should arrive some time today.

If you don't know who these guys are, you should.  They are both incredibly skilled players, either of which would instantaneously make a recruiting class.  Rumor has it, they want to play together.  Duke has long been considered the favorite for their services, eventually, but this weekend could change things.  Key word: could.  Part of a good official visit is seeing other students excited about the University.  And maybe you throw them a Sic 'em! if you see them around.  I'm not asking you to break any NCAA rules, just a simple sic 'em should suffice. 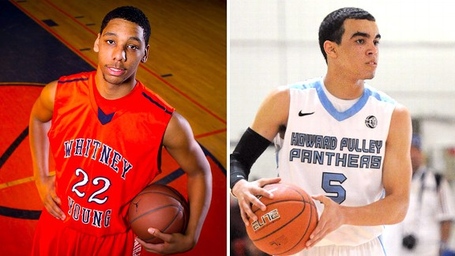 These are the two guys you're looking for.  The one on the left is Jahlil, and he should be pretty recognizable at 6-10, 270.  On the right is Tyus, who stands about 6-2, 180.  You might see them individually, surrounded by coaches, or together, once Jones gets to town.

I believe the plan is for both players to attend the football game tomorrow, so if you needed another reason to go because you don't really like football (what?), there it is.  This weekend could be an amazing one for Baylor Athletics as a whole.  Do your part.