Baylor takes on a familiar foe tomorrow evening in its first action of the 2013 Big 12 Championship. On the line, by virtue of the Bears' stunning victory last week over Kansas, is a berth in the NCAA Tournament. 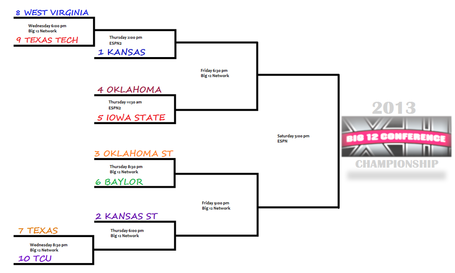 Texas and Texas Tech emerged victorious from their games tonight, so keep that in mind. The bracket is courtesy of Peter Bean at BurntOrangeNation.com.

As we stand today, Baylor is in a relatively unfamiliar (recently) position of fighting for its NCAA Tournament life. I've said before and stand by now my belief that should the Bears beat Oklahoma State tomorrow, they will earn themselves a spot in the NCAA Tournament beginning in mere days. Should they lose, there's really no chance. Winning earns us a matchup with either a co-champion of the conference, Kansas State, or the team playing about as well as any in the conference, Texas. Those who disagree with me about the value of another win over OSU say we'll have to take that one, too. Our chances of doing that are ... not great.

The good news is that our first foe is one we've faced before-- twice this season, in fact-- to both good and bad results. In the first matchup this season, the Bears triumphed at home over the young Cowboys on the strength of Pierre Jackson's 24 points. In the second merely two weeks later, Oklahoma State won in overtime after Markel Brown blocked an A.J. Walton layup with seconds remaining and then scored the winning points himself after traversing the length of the court.

In the two games, Baylor managed to hold Big 12 Freshman and Player of the Year Marcus Smart to just 12 and 14 points, respectively, and the Cowboys as a whole to a dismal 2-16 and 3-21 from the 3-point line. If Baylor is to have any chance tomorrow, it must do something similar by challenging Oklahoma State's guards on the offensive end (which I'm sure Pierre Jackson will enjoy) while also making their lives difficult on defense (Walton's specialty). Should the beastly Cory Jefferson that tore the Jayhawks asunder show up, well that would be make things quite a bit easier.

According to Ken Pomeroy's log5 predictor, Baylor has a 36.6% chance of winning tomorrow's game and getting to the semifinals of the tournament, not exactly a favorable outlook. Vegas is somewhat more bullish, putting us as between a 2.0 and 2.5-point underdog as of the latest changes, according to Statsheet.

Also according to that Statsheet page, the most important factor to beating Oklahoma State appears to be keeping them off the charity stripe. In conference play, Oklahoma State leads the Big 12 in both free throw attempts and free throws made. Not coincidentally, they also lead in free throw percentage. All of that makes sense when you have athletic, attacking guards, as the Cowboys do, and you win more games than you lose, as the Cowboys have. Those same athletic guards allow OSU to lead the conference in steals, and their efforts on the defensive glass have them second in defensive rebounding.

On the plus side, Oklahoma State, as we've seen, is not great from outside the arc, ranking ninth in the conference in Big 12 play. They are also ninth in offensive rebounding and offensive rebounding percentage, something we should be able to exploit with our bigs. It appears so far this season that our strategy has been to let them bomb away while cleaning up the misses, and I would expect that to hold true tomorrow. We'll see how it goes.