Only six games in to the 2012-2013 season, this Baylor team has more losses than most imagined they would at this early juncture. At first glance, it seems as if the Baylor woes are primarily offensive, failing to reach 60 points in either of their losses, but if you watch the Bears more closely then you'll find a handful of defensive struggles.

For any team to be truly great, it must be able to get defensive stops on a consistent basis. This Baylor team hasn't reached that level of basketball yet. A good defensive team can win games on the defensive end of the court, even when things aren't clicking on the offensive end. This, however, takes a solid defensive game plan from the bench, as well as the entire team moving as one and executing this game plan on the court. Baylor has simply lacked that defensive integrity this season.

This Baylor basketball team has the potential to be excellent defensively. A handful of quick guards who should pester the ball defensively, along with a mixture of athletic and sizable big men who should seemingly make life hard for most other Forwards and Centers across the country. However, this Baylor team finds itself making a plethora of mistakes that take a defense from the range of great and good to the area of average and at times below average. 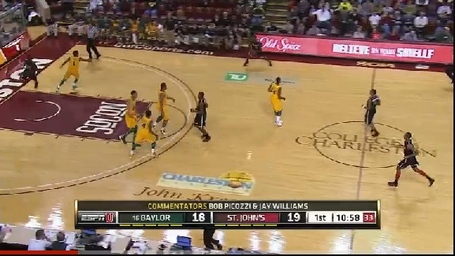 In the above image, St. John's is in transition with their point guard kicking it ahead to the wing for an attempt at an easy bucket before the Baylor defense can get set. Notice that L.J. Rose and Duece Bello have successfully picked up a man in transition while three other Bears are surrounding a single St. John's player 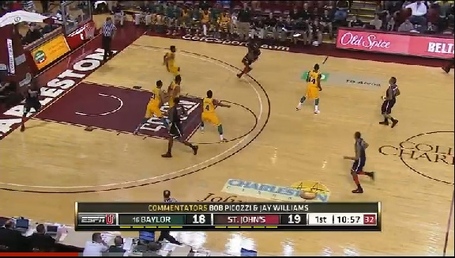 The Bears lack of communication in transition D results in an open jumper for St. John's, off of a dribble none the less. This is inexcusable if Baylor wants to be good defensively, even more so because all five Baylor players were "back" on Defense. 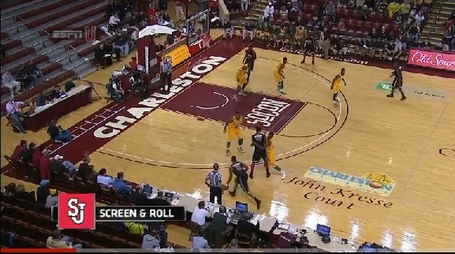 Another thing great Defenses do is identify excellent shooters and run them off of the three point line. Here, St. John's is executing a Pick & Roll with D'Angelo Harrison who went 6-9 from three against Baylor. Harrison's defender ran straight into the screen giving Harrison time to make a decision. 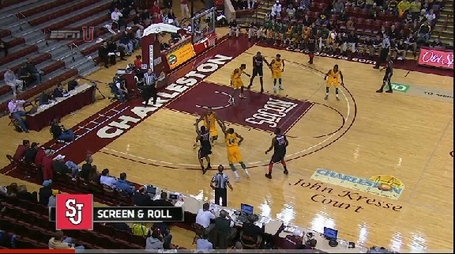 The result of the above Pick & Roll is an open look for a good shooter who was in the zone. Ricardo Gathers didn't show at all, leaving Bello no opportunity to recover before Harrison got the look. 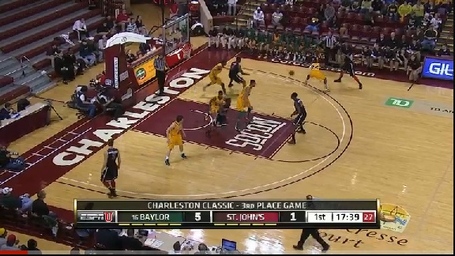 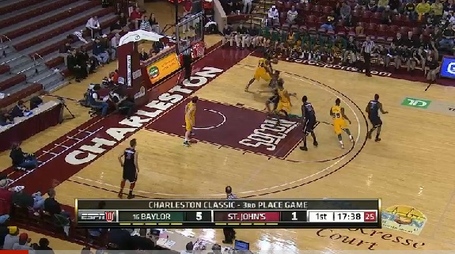 In the two images above you'll see a post entry pass, followed by the passer cutting through. A.J. Walton, the defender guarding the cutter, did a marvelous job of bumping the cutter and not letting him receive a pass, and Brady Heslip is in a good help side position in case of an attempted lob pass. Isaiah Austin however, unnecessarily leaves who he is defending and shows on the backside of the man A.J. Walton is guarding. Here is when it is important that a good Defense requires every player to be on the same page 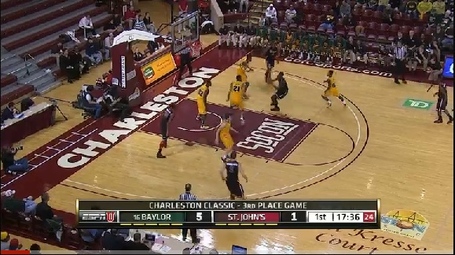 By the time Austin leaves the cutter, his man has snuck near the first hash for an easy jumper. Even though four Bears defended the play perfectly, Austin's mental lapse gave up an easy shot. 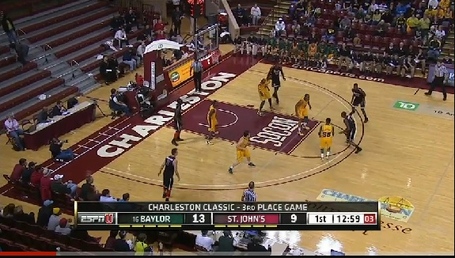 Above, you'll see a possession which Baylor defended extremely well. The shot clock had ticked down to 3 seconds before the St. John's point guard decides to isolate Pierre Jackson. Pierre does a serviceable job of running him into a help defender, and forcing him to change direction and cross over. 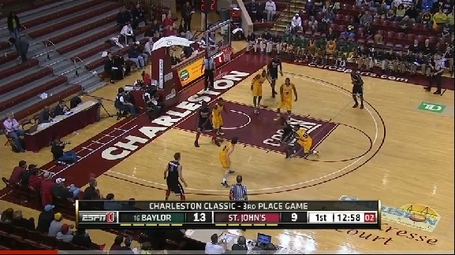 In this shot, you see that instead of moving his feet and forcing the guard to take a contested shot as the shot clock expires, Pierre circles behind his man and takes a risk, going for a steal. 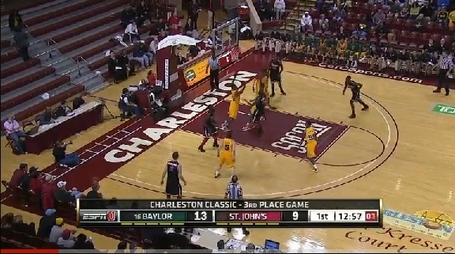 You'll see that instead of having to force up a tough jumper, St. John's guard takes advantage of Pierre not being fundamentally sound and gets deeper in the lane for a shot a full 10 feet closer to the basket.

The screen shots I included here are just a handful of the dozens I have on my computer of Baylor defensive breakdowns. On top of the issues above, Ricardo Gathers often gets caught ball watching, and A.J. Walton has a terrible tendency to foul the opposing teams guards 30 feet from the basket.

However, the player that seems to put the Baylor defense in jeopardy the most is Pierre Jackson. Instead of using his quickness to harass opposing guards, he often finds himself gambling and leaving himself and his teammates scrambling. Pierre's defensive discipline is one of the first things that needs to be fixed if the Bears want to be a solid defensive team.

Luckily for Baylor, this season is still young. From my seat in the stands, it appears that Scott Drew and his staff need to emphasize the importance of being a solid defensive team. On top of that, they need to emphasize playing in a disciplined manner on the defensive end of the court. This Baylor team has a lot to figure out on both ends of the court if they want to play deep into March, but if they want to make it to Atlanta in April.