How the Buffs Beat the Bears

A visual breakdown of how Colorado slowed down Pierre Jackson, and the Bears.

Share All sharing options for: How the Buffs Beat the Bears

On Friday afternoon, the Colorado Buffaloes handed the Bears their first loss of the season. While Colorado was at it, they exposed a handful of fixable, yet problematic issues with this Baylor Basketball team.

Colorado and coach Tad Boyle fully understood exactly what made this Baylor team tick offensively. In the first two games of Baylor’s season, Pierre Jackson torched Lehigh and Jackson State to the tune of a combined 39 points and 19 assists. He followed that up by tormenting Boston College, scoring 31 points and dishing out 7 assists. Colorado however held Pierre to 12 points (on 11 shots), while he had only 1 assist compared to 3 turnovers. (Baylor as a team had 7 assists and 11 turnovers)

The natural question at this point, is what did Colorado do differently. The answer, Pick and Roll defense. In Baylor’s first game against Lehigh, Pierre used screens to get into the lane at will, forcing 1 defender to guard both Pierre and the big man on the back side block. Jackson State is such an inferior team, that we’ll leave them out of the equation. 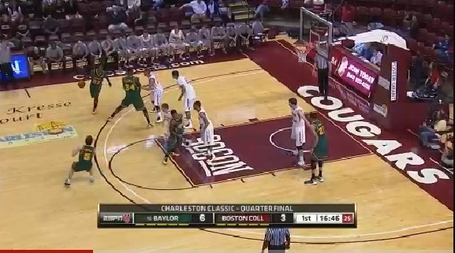 As you can see in the picture above, Boston College got in a bad habit of going under screens with the screeners defender sagging into the lane. In this shot, it is A.J. Walton who is a virtual non-threat to knock down a jumper outside of 15 feet. However, they employed the same strategy against Pierre who took advantage of this by knocking down three’s or turning the corner and attacking the lane. 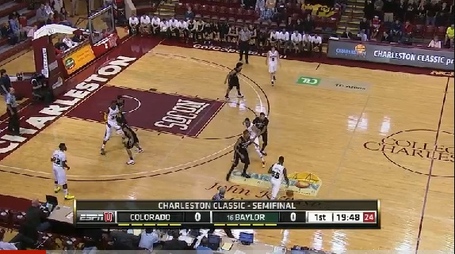 The image above shows the philosophy Colorado took in defending the pick and roll. You heard Jay Williams say on the broadcast they were blitzing the ball handler, also known as trapping him. The benefit gained by trapping the ball handler is you are forcing him to a) give up the ball or b) be pushed away from the basket. 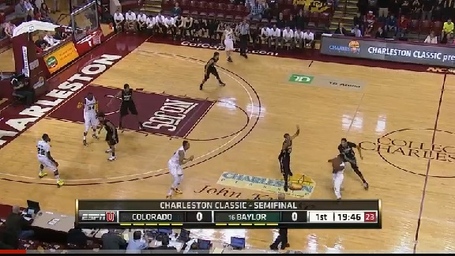 The result of trapping the original pick and roll was that the Buffs pushed Pierre out near midcourt, forcing him to throw a pass to Isaiah Austin over the arms of an outstretched defender. Having to throw the pass over 6’5" Spencer Dinwiddie (who was hounding Pierre all day) allowed the help defender time to recover to Austin. 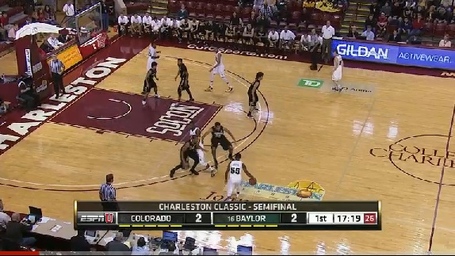 Again Colorado traps the ball handler, and forces Pierre all the way out near the midcourt line. Not much good can come from your best player being double-teamed near midcourt, which Colorado again accomplished. 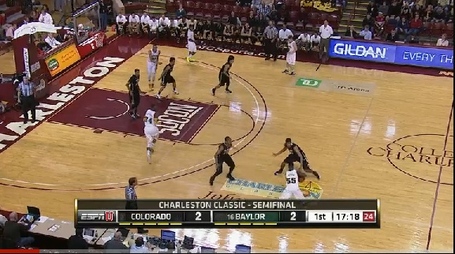 This time, instead of popping like Isaiah Austin, Cory Jefferson rolled to the basket, leaving Jackson with no options. This resulted in Baylor having to reset the Offense, with near 15 seconds run off the shot clock.

Colorado successfully executed their defensive strategy, constantly pressuring Pierre, never letting him attack. This resulted in Pierre forcing things, over penetrating, losing his handle, and unnecessarily trying to split the trap. No matter who the ball handler was, the pick and roll more often than not resulted in a bad result for Baylor.

There are a few adjustments that Baylor could potentially make, and ideally the ideas that Scott Drew and company come up with in the film session will be better than mine right here.

One thing Pierre Jackson did in game that could have been successful for Baylor was to refuse the screen. 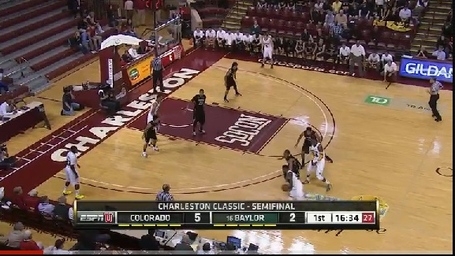 As you can see above, Cory Jefferson went to set a screen, and his defender was in position to blitz the ball handler. Pierre, seeing this decided not to use the screen, and instead drove away from it. This forced A.J. Walton’s defender to remain collapsed to cut off Pierre freeing up Walton in the corner. (See Below) 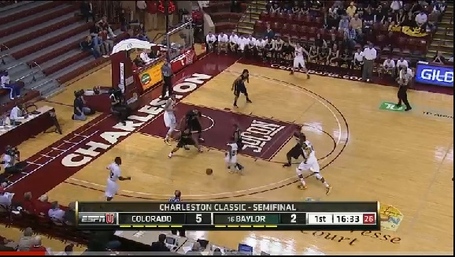 Of course, Walton isn’t the guy we’d like to be shooting a potential corner three, which brings to the forefront another of Baylor’s issue, a lack of wing scoring. However that is for another post.

There are other options for Baylor when they encounter this type of Pick and Roll defense as the year goes on. For one, they could slip the screener, having him not set a screen and instead slide right to the basket. Also, if Pierre is being guarded by a smaller defender, the pick and pop with Isaiah Austin could be a viable option, as Jackson could make a more direct pass.

However, my go to option if Baylor struggles like this again, would be to get the ball down low, or potentially to Heslip coming off a screen when he finds his stroke. If Scott Drew is dead set on running the offense through Pierre, it might be wise to do so without a screener. Drew runs some nice sets, whether its running Brady off of a staggered screen or setting a cross screen for Austin or Jefferson, and hopefully we’ll see more of that the next time the Pick and Roll isn’t working.