Mark Cuban made waves this morning by saying he would "consider" drafting Brittney Griner in the second round of this year's NBA Draft and would have "no problem whatsoever" letting her try out even if she wasn't drafted. Does that mean we might see Griner in the NBA? No.

Share All sharing options for: About the Brittney Griner / Mark Cuban / NBA  thing

Before I say anything else, I want to make something clear: I love Brittney Griner. She is an incredible basketball player, a great representative of Baylor University, and, by all accounts, a truly wonderful person. She gave Baylor four great years with 2 Final Fours, 1 National Championship, and arguably the greatest season in major college basketball history last year at 40-0. She will dominate the WNBA just as she did WBB in NCAA with size, strength, and a game that has matured over the last four years to the point that she is both an offensive and defensive force. 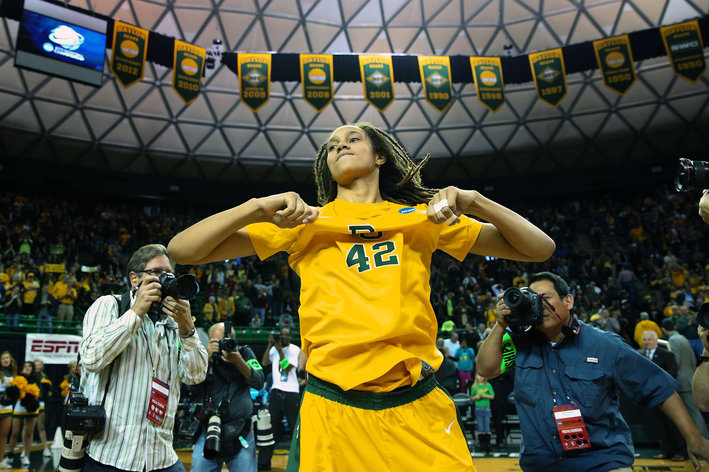 SBNation's WBB Blog "Swish Appeal" addresses the Griner-NBA topic and the variety of responses from across the web.

All that said, she is not an NBA player. And it's not because she's a girl (which she is, before anybody gets clever). It's because in the NBA, her elite size will not be so elite. In fact, compared against most starting NBA 4s and 5s, she'll actually be under-sized. Rather than fielding entry passes over the heads of smaller opponents after establishing her position with strength and footwork, she will be pushed around constantly by players with anywhere from 40-60 (or more) pounds on her, to say nothing on raw strength. If she gets the ball, she won't be able to get a shot off because she doesn't elevate, and her easier points from putbacks will quite simply evaporate. In college, she's a 6'8" force of nature defensively that is almost unguardable (sans Louisville-like groping/punching) on the other end. In the NBA, even mediocre players would score over and around her without difficulty. The differences between what she has faced and what she would in terms of athleticism are that stark. It's almost like playing two completely different games. There will come a day, I'm quite sure, when a woman will be capable of playing in the NBA and holding her own. Today is not that day, and Brittney Griner is not that woman.

Here's the thing: Mark Cuban knows everything I just said and much, much more. He is in the business of finding and acquiring talented basketball players who can play in the NBA. More importantly, however, he is also in the business of public relations, attracting and deflecting attention as needed to serve his interests. And I'm fairly certain that's exactly what he's doing here: creating a bit of a stir. Just look at what he said in the ESPN article I linked above:

I'm certain it would. And if handled tastefully, both sides could go their separate ways afterward having benefited from the exposure. But if handled poorly, Griner could find herself dominated by players who probably wouldn't be thrilled about it in the first place, and that's something to think about, too.

On a somewhat larger note, something I don't quite understand about this situation is why it would be important for Griner to play NBA ball in the first place. She's a female basketball player. A league for female basketball players exists; it's called the WNBA. It doesn't make her any less of a basketball player to do it in the WNBA as opposed to the NBA, nor does it take away from anything she's done that she did it against other girls. I said it last night on twitter and I'll say it again: why not celebrate what she is versus what some inexplicably want her to be?*
*I'm bending over backward here to make sure nobody thinks I'm badmouthing WBB or female basketball players, in general. I'm not making any qualitative judgments about either. I enjoy watching our team play and exhort in their success. I wouldn't spend as much time as I do writing about them if I didn't believe they were worth it.