Baylor fans are thinking big for the 2015 recruiting cycle. But how big should they be thinking?

Share All sharing options for: Could Baylor pull a Top-10 Class in 2015?

A few minutes ago on Twitter, Bud Elliott, SB Nation's Recruiting Guru, and I took part in a short exchange about the potential for Baylor's 2015 recruiting class.  That exchange spawned following this tweet, wherein Elliott predicted that the Top 10 recruiting classes would "almost certainly" come from a list of the usual suspects including Texas, Texas A&M, LSU, Alabama, Michigan, FSU, and so on and so forth.  My slightly-informed guess is that if you looked at the last few years of recruiting rankings, the programs mentioned would make up all or nearly all of those finishing in the Top 10.  It is entirely reasonable, then, and almost certainly correct, to predict that this pattern will repeat in 2015.  Bud has forgotten more about recruiting than I will ever know, so I accepted this statement at face value.

The rest of the conversation is a little more thought-provoking, especially the end.

.@OurDailyBears @Cms186 Baylor has no chance to have a top-10 class if it only takes 17. Favorite this tweet and dig it up in 12 months.

Putting aside the idea that we can somehow prove a current state of events (Baylor's chance at a 2015 class) 12 months from now, this is actually an interesting idea, and something I've addressed before in the comments of the January Recruiting Thread.

Those who know me well know that I avoid absolute statements like the plague.  Looking at that positively, you could say that it's my background as a lawyer flaring up.  Negatively, you'd probably call me a waffler who doesn't want to take a firm stance.  Either way, you can call it semantics, if you want.  But how you say something matters to me almost as much as what it is you say.  So when you Baylor has "no chance" at something, that's going to get my dander up.  If you said "Baylor has no reasonable chance to have a top-10 class," that's something I can't really argue with because it a) is likely true and b) depends on how you define a "reasonable chance."  "No chance" is an absolute.  "No chance" is testable.

A few years ago, this would have been an impossible question due to the fact that there was no even somewhat objective way to compare classes across years or project classes forward through a single recruiting cycle.  Now, thanks to the majesty that is 247Sports Composite ranking system and their "Class Calculator," we can.

To establish the baseline of what defines a "Top 10 class," I looked at each of the #10-ranked recruiting classes from the last 6 years.  Starting with the 2009 class, each #10 class earned the following points:

As you can tell, point values varied pretty widely over the 6 years, but the average point value for a #10 class was 261.55 points, which seems about right over the entire range.  Using that number for 2015, Baylor needs 261.55 points or better to have what I'll call a "Top 10 Class."

Now the Class Calculator comes in.  Because 247Sports assigns a point value to each prospect based on a variety of factors like their rank in position and overall grade, they were able to create a system that lets you build a prospective class and find out where you might be.  For my 2015 Baylor class, I limited myself only to those recruits that Baylor has offered and that have included us in their latest cut or listed us as a favorite to this point.  I'm not just finding the best players in the land and throwing them in there.  These are guys for which we have verified mutual interest.  Here's how the class turned out:

Before I tell you how many points that is, I know this is the most wishful of wishful thinking.  Stidham, for example, is trending hard to Tech.  The highest-ranked recruit on the list, Malik Jefferson, will probably go to A&M.  This is basically my Wish List fed into the class calculator, and I know that.  But Baylor has at least a chance with all of these recruits at this time.  For many of them, we are either the favorite or predicted to be according to 247Sports. 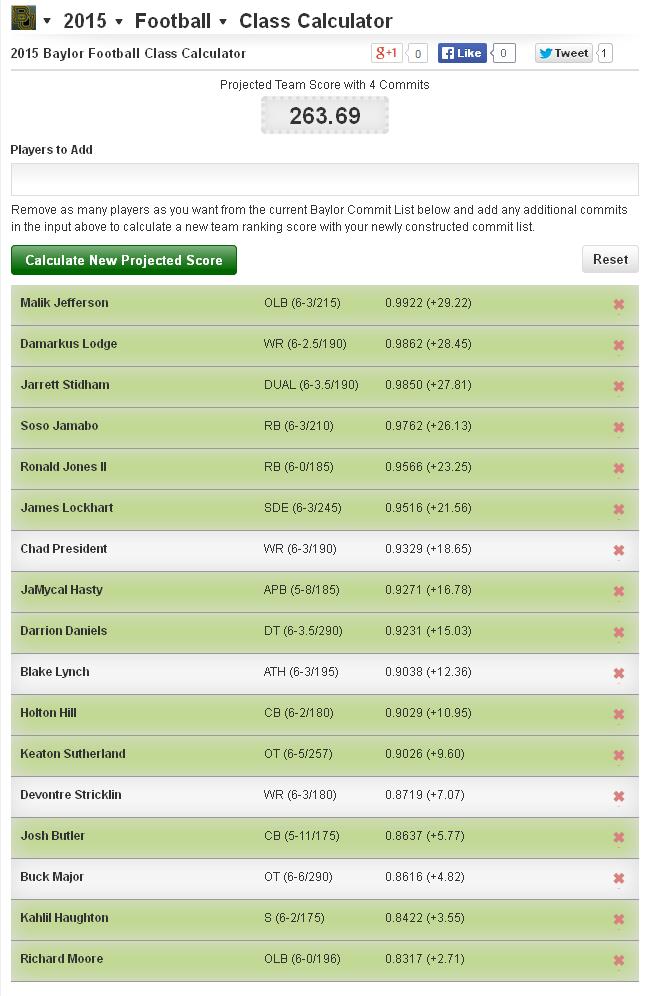 That's so you didn't think I was making it up and wouldn't have to redo the whole thing to test me.

After a few updates to rankings -- I mentioned this as a possibility -- Baylor's Miracle Class is now firmly within the Top 10 benchmark I established earlier.  It is therefore possible for Baylor to have a  Top 10 Class, should everything go our way.  That's true even with just 17 total recruits.

It's important to remember that everything probably won't go our way.  But hey, we're just having fun here, right?