Baylor's 2015 class now has both a beginning and what some might consider the most important feature: a President. Upcoming Temple junior WR/QB Chad President gave his verbal commitment to the Baylor Bears this afternoon, becoming (I think) our earliest football commitment ever.

When I first started posting April recruiting updates about two weeks ago, it was mostly 2014 guys reporting new offers. Then a bit of 2015 news, mostly related to quarterbacks, started trickling in. Exactly one week ago today, Matt Stepp of TheOldCoach tweeted that Temple WR/QB Chad President was reporting three offers from Baylor, Texas, and Texas Tech. I remarked at the time that it was still "very early" for him, but the news that Baylor lead was encouraging. A week later, he's our first commit of the 2015 class. 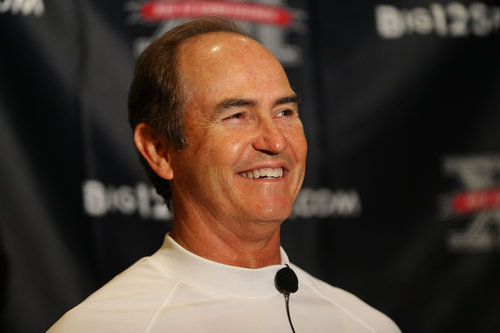 SB Nation.com recruiting analyst Wescott Eberts takes a look at the first commitment in Baylor's 2015 class and where he might play once he gets to college ... in 2015. Crazy.

If you're wondering why I list him as a WR/QB, it's much the same reason I do for 2014 target Randall Cunningham, Jr.; through his freshman and sophomore years at Temple, President has played WR with the QB position manned by an upperclassmen, 2013 TCU commit Zach Allen. He should get his chance this season, after playing QB only sparingly in relief of Allen so far, to start for the Wildcats. Whether he plays that position again in college is anyone's guess (Wescott, in the link off to the right, says he thinks President will be a WR). According to Brian Ethridge of BearsTruth.com, we're apparently willing to give him the chance.

Even if that's true, I wouldn't expect it to have much, if any, impact on our other targets at QB for 2015: namely, Troup's Blake Lynch, who doesn't have an offer yet but soon should, and Stephenville's Jarrett Stidham, who does as of this morning. If there is any doubt whether President can play QB in college, you obviously at least attempt to take another alongside him whose future is much more certain.

Because there is so little information available at this stage in the 2015 game, I won't bother linking all of the recruit profiles at the various subscription services. They don't really impart any useful information I haven't already told you, anyway. The one at 247Sports, however, has a useful little tool showing twitter chatter about a particular recruit, and from the looks of it, the consensus is that Baylor snagged a bigtime player for 2015 today. I'm talking about a potential national top-50 player in another year's time. I'll also link his HUDL highlights, which are quite impressive, so you don't have to google "Chad President" and be reminded through several pages of results that there is a country named Chad far more important to the world than a HS football player from Temple, Texas.

Just so nobody missed them: Chad President's HUDL highlights. Welcome to Baylor Nation, Chad! I can only hope that with another strong season in the Big 12, possibly including a conference championship (wink), we can build the best recruiting class in Baylor history around you!

UPDATE: President was just interviewed on ESPN 1660 in Waco. The segment is only about 5 minutes long, so you should take a listen.