The Search for our Next QB -- A New Recruit Emerges?

The ongoing recruitment of the next record-breaking QB under Art Briles may (key word: may) be taking a new direction entirely, as a prospect committed to a marquee ACC school lets our staff know of his interest.

Share All sharing options for: The Search for our Next QB -- A New Recruit Emerges?

Two months ago, I wrote a post outlining the current (as of then) hierarchy of Baylor QB recruits for the 2014 class. There were three names on the list at that point, all of whom were wide open in their respective recruitments. It was my best guess, at the time, for where we were looking at the all-important position, blessed as we are with one of the absolute best minds in college football for the shaping of a quarterback.

Since that point, you could simultaneously say that much and little has changed. The #3 name on the list, Andrew Sharp of Summer Creek HS in Humble, Texas, didn't get the assurance he wanted from Baylor that he would play QB, and committed to Utah. Then he decommitted for Kansas State the next day. Should Baylor strike out everywhere else, the potential exists that we might revisit our reticence to guarantee him a shot at QB and give him something to think about. That's not to say we'd definitely switch him, but we might. Sharp is a high-3* recruit that 247Sports has as their #17 dual-threat QB in the country.

The #2 name on the list was actually the biggest in terms of rankings, with Bossier City, Louisiana's Brandon Harris occupying the spot. Baylor offered Harris in mid-April, but despite the fact that Art Briles recruited Harris himself initially, close observers of the Baylor program wondered if the Bears ever viewed him as highly as the recruiting rankings. After a relatively short camp tour through several SEC schools and Ohio State, Harris eventually committed to his hometown LSU Tigers on July 18, several days after eliminating Baylor in the cut from top 5 to top 3. Harris is the #3 dual-threat QB by 247's rankings and has recently jumped into their top 100 overall with a strong 4* grade of 95.

At this point, only the #1 name on my list remains, and it is one every football fan probably knows without knowing it: Randall Cunningham II (or Jr., I've seen both). He is an extremely raw, extremely athletic recruit whose rankings don't quite match the name but has apparently always occupied the top spot in our coaches' eyes. They want RC2 (as he has been dubbed here and in other places) and have so far been willing to wait out his recruitment. It was because RC2 remained that we didn't give Sharp a guarantee. It was because we liked RC2 better that we didn't pursue Harris harder while he was open. As of this date, 100% of responders on 247's Crystal Ball predict RC2 to the Bears, and that would make me quite happy, indeed.

That being said, it may soon be time to update my list with another name; this one, according to BearsTruth's Colt Barber and Brian Ethridge, having sought out our staff himself. His name is Alin Edouard (pronounced, I think, as Allen Edward, since that is actually his twitter handle). Baylor's 247Sports site reported last week that Edouard, a high-3* recruit who is (at this point) committed to Miami, reached out to our coaches somewhat out of the blue, confirming in a way the persistent rumors that his commitment to the Hurricanes is of the rather soft variety. In this morning's Recruiting Roundup ($$$), Colt Barber quoted Edouard as saying that he "really like[s] Baylor" and "could see [himself] playing there." His interest is genuine enough, it seems, to send our coaches his film personally. 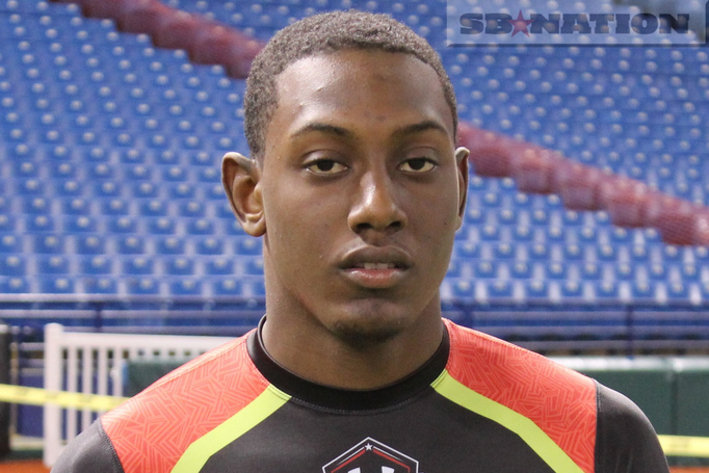 It's not yet known whether our coaches reciprocate Edouard's interest. Considering most of the offensive staff is in Fort Worth this week at a HS coaching clinic, they probably have other things on their mind. Were I to guess, even if Edouard was willing to commit upon receiving an offer, our coaches would still prefer RC2, a player with which they've built a relationship over the last few months and they clearly, dearly want.

Edouard, as you can see from the link to the right of this paragraph, is listed at 6-1, 180 pounds, a size similar to our own Robert Griffin III when he first got to Baylor. Like most HS QBs, he's easily the best player on his team from his HUDL video, and his coaches give him the chance through a multitude of designed running plays to showcase his skills. As a QB, SB Nation's Bill Elliott says his mechanic and tendencies need work, in that he too often breaks the pocket looking to run rather than continue the play as called. If his recruitment truly opens back up, the offer list that now consists of teams like Louisville, Penn State, Nebraska, and Tennessee (among several others) is likely to grow, since we're somewhat late in the summer and there are probably a number of teams still looking for a QB.

Tell me what you think of this potential QB recruit in the comments. He's quite interested in Baylor, the only question is whether we will be as interested in him.