Baylor's Scout and Rivals boards are reporting now that the Bears reeled in commitment #5 for the 2014 class today in Rockdale OT Josh Pelzel. Given the relatively down year for OL prospects in Texas, securing the first OT in this class is a huge step forward.

It seems Baylor is picking up a little recruiting momentum now with Terence Williams coming back into the fold, 2015 super-QB Chad President choosing the Bears, and now our first OT of the class pulling the trigger. Pelzel was one of the staff's first offers at the OT position and has visited Baylor twice, for both our first Junior Day and the Spring Scrimmage. 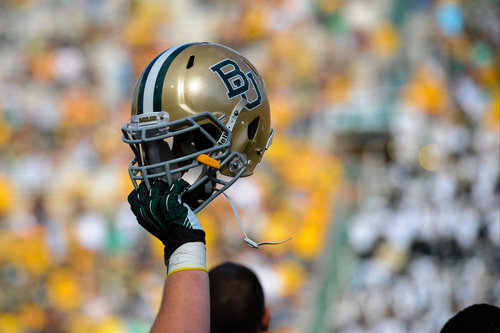 Information on Baylor's complete recruiting class for 2014, which has now grown to 5 with the commitment of Rockdale OT Josh Pelzel.

Already 6'7" tall and a whopping 334 pounds as a high school junior, Pelzel has what we've come to know as the classic tackle frame for our offensive line with long arms and broad shoulders. The weight might be an issue, but it's something that I'd expect to come down before he gets here. Probably considerably. He's ranked by basically every service as a 3*, receiving an 87 grade from 247Sports that puts him in the upper echelon of 3* talents. He holds offers from Houston, Washington State, and, as recently as a few weeks ago, Texas Tech. He's long been considered a Baylor lean after naming the Bears his favorite in April, but most though it would be a fight between Briles and new Texas Tech head coach Kliff "Human Ken Doll" Kingsbury for his services.

That fight has now been won.

His HUDL highlights from this past season are available for all to see should you wish, and if/when the Recruiting Overlords at SB Nation write something up about our latest commitment, I'll make sure to update the thread. For now, I'm extremely excited to see our first OT commit for this recruiting cycle. He joins Devonte Jones as our second OL recruit, generally, an area I would expect us to hit hard in the coming months.