Baylor Out for Randall Cunningham, Jr?

An update tonight from 247Sports' main page about RC2's recent visit to Oregon has Baylor on the outside in his recruitment, unlikely to be a serious player going forward.

Share All sharing options for: Baylor Out for Randall Cunningham, Jr? 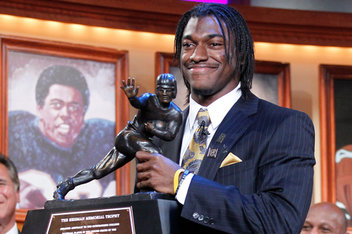 Welp. I whiffed on all of them.

Just over four months ago, I wrote a post here on ODB about Baylor's QB search in the 2014 class (at right), focusing on what I believed to be our hierarchy of offers as it stood at the time.  Atop that list sat Randall Cunningham, Jr., referred to around these parts (and elsewhere) as RC2.  Baylor offered the Bishop Gorman (Las Vegas, Nevada) star in February, before he'd ever started a single game in high school as a QB, and seemed focused on him above all others.  By mid-July, when our #2 target Brandon Harris committed to LSU, he was also our only uncommitted target.  Unless something unexpected happened, it would be RC2 or bust for Baylor in 2014.

According to an update tonight from 247Sports, after RC2's weekend visit to the Oregon Ducks, it looks like bust may be the big bet at this point.  The update, which I won't copy and paste for obvious reasons, quotes Mr. Cunningham, THE Randall Cunningham, as saying that RC2 has narrowed his list almost exclusively to Pac 12 schools, and Baylor didn't make the cut.  We can speculate all night why that might be, and of course I will.

Before I do that, however, let me say this was not entirely unexpected.  About the same time that Brandon Harris committed to LSU, I started hearing rumors, some from people I trust implicitly to know what they're talking about, that Baylor might not take a QB in this class at all.  Despite the early offer to RC2-- and we did offer, I'm not rewriting history-- we were reportedly never completely sold on his future in football, generally, and at the QB position, specifically.  All the athletic tools you could want are there, but those same tools have given RC2 opportunities in track that are important enough to him to play a major role in his recruitment.  He has mentioned his desire to continue participating in the high jump, where he is one of the best in the entire country, in every article I've ever read about him.

Were I to bet, I'd say that desire is probably the reason Baylor won't be a big player in his recruitment going forward, for both sides.  For RC2, there are probably numerous schools across the country better suited to help him become a championship high jumper, should that be his wont.  On the other side, I'm not sure how committed our staff is to the idea of the "franchise" QB competing in the high jump at the same time.  And being entirely honest, I'm not sold on the idea that it's really possible, at all, for a QB at a major program to compete at a high level in track and play QB simultaneously.  Sure, RGIII did it for his first year at Baylor, but the knee injury thereafter was not the only reason he stopped.  The same muscle mass that helped him succeed as a sophomore and junior likely would have excluded him from the upper echelon of track competition, anyway.

No matter the reason, our elimination from the RC2 sweepstakes means there are no uncommitted QB recruits holding a Baylor offer, nor are any (as far as we know) likely to receive one.  My guess is that we ride through the 2014 class without a QB recruit, knowing we have Bryce Petty back (in all likelihood) for 2014 and Seth Russell looking primed to start in 2015 as a redshirt junior.  That's not even mentioning Chris Johnson, who is redshirting now.  Then, with Chad President already committed, we'll look to take two in the 2015 class, if at all possible, with our second major target being Stephenville QB Jarrett Stidham, who just happens to be visiting this coming weekend for the WVU game.  So if you're worried about our QB recruiting, the best thing you can probably do is go to that game, cheer loudly, and hope for a huge Baylor win.

I have to admit, I'm a little sad that we won't get the RGIII->RC2 awesomeness.