Baylor vs. WVU Preview Part I: A Man Named Geno

It's going to be strength on weakness this week as Baylor's much-maligned defense will be tasked with reining in Heisman favorite Geno Smith and the Mountaineer O.

Share All sharing options for: Baylor vs. WVU Preview Part I: A Man Named Geno

Last night I basically began this offensive preview by introducing you to the five biggest playmakers on West Virginia's offense. All of that information is still relevant and useful to the best of my knowledge, so you should look read this post with that one in mind because we'll be talking mostly about all the same guys. That means I won't be transcribing all the same stats over since they're already in the previous post. Just an added note, WVU HC Dana Holgerson stated this morning that Shawne Alston is expected to play on Saturday. I don't know if that's coachspeak to keep Baylor guessing about who we might see or if he really will. Your guess is as good as mine.

For our look at WVU's offense as a whole, we'll start by looking at their performance in 2011 since that is the biggest complete set of information available to us and the cast of characters is basically unchanged. 2012 is obviously important, too, we just don't have the same depth of info from which we can draw. Before we get started, here are the game notes from WVU about Saturday's matchup, including a depth chart on page 17 of the .pdf.

2011 -- Holgerson Takes Over at West Virginia

As Bill Connelly noted in his preseason look at the Mountaineers (and I can't recommend strongly enough that you read his work), theirs was a story last season with basically three parts. Early on, the offense struggled, probably as a result of the coaching turmoil in the offseason and the elevation of Holgerson to the head gig. Those struggles lasted three games before WVU righted its offensive ship and took off for six straight. Three more inexplicably dour performances followed before the Mountaineers launched the blitzkrieg on Clemson in the Orange Bowl that cost dear old Kevin Steele his latest job. Here are the stats, courtesy of Bill C.

(Obviously that doesn't include the Orange Bowl). So far this season we have basically the opposite trend; WVU blew out both of its first two opponents with impressive offensive fireworks before struggling against an improved Maryland defense. Of course, "struggling" in this context means they only scored 31 points.

Add it all up last season and you had an offense that was good, not great, but that peaked in its final game of the season on national television. That set up a situation where, after the first two games this year, confirmation bias made people believe WVU has absolutely the best offense in the land. That's certainly possible, I just don't think we know it yet. Maryland didn't make it seem that way in holding the Mountaineers to 363 total yards. Here's the charts on WVU's offense from last year taken from FootballStudyHall's excellent statistical preview: 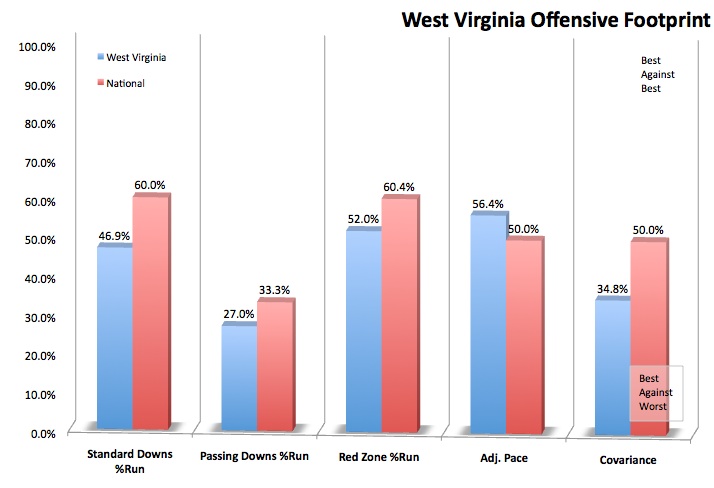 What you can see from this is that they ran less than average between the 20s on standard and passing downs but quite a bit once they actually get to the red zone, and played at a pace actually only slightly above average nationwide. It is a hallmark of Air Raid offenses, of which WVU is one*, that they struggle to pass in the red zone as the field shrinks. These offenses rely on space in the open field. Texas Tech used to have the same exact problem of churning up yards in the middle of the field but struggling against better defenses to score between the 20s. If you can keep from getting killed in long pass plays, your defense may have a chance to to limit the damage. To bend but not break.

*WVU's strongly resembles its Air Raiding predecessors from the coaching tree of Hal Mumme because of Holgerson's connections to that tree. He spent time with Mumme at Iowa Wesleyan before coming into his own under Mumme's most famous disciple, Mike Leach, at Texas Tech. That's actually where Holgo and Briles know each other directly. They were on the same staff. For more information on Holgerson and how the Air Raid itself works, check out the season preview from Bill C or this discussion of the offense in general by Chris Brown. I'd also highly recommend Brown's look at Holgerson's version in particular.

Here are WVU's stats through the first three games of this season courtesy of cfbstats.com:

There's a lot going on there, so let's just say that so far this season, West Virginia has been one of the absolute best offenses in the country, led by Geno Smith, their outstanding QB. They've only turned the ball over 4 times in 3 games, their QB is second in the nation in total yardage per game (behind our own Nick Florence), and their offense is averaging an impressive 7.35 yards per play. That last number is slightly better than our own 7.26.

Of course, as I've said repeatedly, opposition plays a factor. Marshall and James Madison are both extremely weak on both offense and defense. Maryland is the only even average defense (and team) WVU has played so far, and WVU could have easily lost the game. Even still, FEI loves what the Mountaineers have done in terms of offensive efficiency, ranking them second in the country behind only Texas Tech.

The straw that stirs WVU's offensive drink is, of course, Geno Smith, but as I said last night, he's not the player I fear most. That is and will continue to be Tavon Austin, a smallish speed merchant who makes plays in the open field that boggle the mind. Stedman Bailey on the other side is no slouch, either, and Baylor will basically need to stop both. The easiest way to do that is to tackle well in the open field and not give Austin or Bailey the chance to get space. If we tackle like we did last week against ULM, we're probably going to have a really, really painful game. If we improve and/or actually manage to slow down those two receivers, WVU's WR depth behind those them has been relatively limited (or, I guess, unnecessary) so far this season, so we might have a chance to limit their offense.

The easiest way to do that has to be through bringing pressure on Smith and disguising our defensive intentions. Brown notes in the piece I linked above that Holgerson's offense puts an extraordinary amount of responsibility on the shoulders of the signal caller himself to diagnose what is happening at the line and actually change the play if need be. By packaging plays out of the same formation, WVU gives Smith the ability to do as the defense allows him based on what he sees. In the first two games, that worked out splendidly for the Mountaineers. In the third, Maryland managed to make Smith look mortal by stunting their linemen and blitzing their athletic linebackers constantly. The Terrapins took the risk that Austin would beat them (and according to the stats, he did), but they were let down by their own offense more than anything else. I hesitate on whether Phil Bennett will be willing to take that same risk, but it might be Baylor's best option. If we can confuse Smith and/or force him to make a bad decision, there's little doubt we'll be better off. Bryce Hager and Eddie Lackey certainly have the speed for it, and perhaps we might actually see a blitz or two by Ahmad Dixon, as well.

We're going to need that exterior pressure because, unless Baylor shows something against WVU we have not yet seen, our defensive line alone will probably bring the pressure we need by themselves. We were better in that respect against ULM than we have been but still not great, and WVU's offensive line is almost certainly better than that of the Warhawks. WVU's running backs are not great at pass protection, but Smith is mobile enough to make up for it and his offensive line is both experienced and talented, with a total of 99 starts between them coming into this season. Considering that WVU's line resembles our own in that their strength is probably in the interior, It's difficult for me to see Trevor Clemons-Valdez and Nick Johnson making a difference in this game no matter how hard they try. If they have a weakness on the OL it is LT Quinton Spain, who only had 1 start coming into this year and, at 6-5, 334-pounds, may be susceptible to speed rushers off the edge. Maybe, just maybe, Terrance Lloyd makes something happen against him.

If you're expecting us to shut down WVU's offense even as much as Maryland did last week, you're almost certainly going to be disappointed. Smith and his WRs are too talented, and Holgerson too good an offensive mind, to let that happen. We also probably don't have the horses, particularly on the line, to keep them from doing the things they want to do. My hope is, though, that we can vary up our defensive looks enough to affect Smith's decisionmaking at the line and perhaps force a turnover (or two, or three) to even things up a bit. I think it will take at least 2 for Baylor to have a puncher's chance. WVU should have their own problems stopping our offense, so this game could easily turn on which team is able to limit the other's possessions generally.

Our keys on defense will be tackling well in the open field (our extra day this week was hopefully devoted to nothing but) to limit yards after the catch for WVU's speedy receivers, getting some sort of pressure on Smith to force him to make decisions quickly, and stopping the running game insomuch as WVU attempts one to make their offense as one-dimensional as possible. My biggest fear is that WVU will take advantage of our safeties in the middle of the field just like A&M did last year and burn us repeatedly. Of course you probably knew that already since I talk about our safeties constantly. The eternally optimistic side of me hopes that the rumors of as-yet unseen defensive looks are true and that we used our extra day this week following the Saturday game doing nothing but tackling drills. I continue to wonder if K.J. Morton might not be best-served at the safety position to get Joe Williams and Demetri Goodson on the field at the same time. Of course, WVU runs quite a few 3-WR sets, so we might see that, anyway. I highly doubt we continue running our base 4-2-5 against 3-wides like we have so far.

I am slightly hopeful that we will be able to avoid last year's trap of continued short fields. Baylor might be benefiting more than any other school from the change in kickoff rules this season, and obviously their job as an offense gets harder the further they have to go to score.