Game Day information, TV listings, tickets, links, previews, and everything else for Baylor vs. West Virginia, this coming Saturday at Floyd Casey Stadium.

As Spencer Hall said yesterday, no team in the country has been as schizophrenic as West Virginia this season. The Mountaineers began the season with a startlingly close win over FCS William & Mary with their offense in shambles before very nearly scaring the Oklahoma Sooners on the road. Georgia State didn't pose much of a problem the following week, but Maryland did, shutting out WVU in Maryland and sending the program into what seemed like a total tailspin. Then came last week's Oklahoma State game, where the Mountaineers either resurrected themselves as a program or pulled an incredible trap game against the preseason Big 12 favorites.

Overall, the stats will probably show that though the offense has disappointed thus far, the defense at West Virginia has improved tremendously from last season, exactly as everyone expected, I'm sure.

I'm still not crazy about what the NCAA stats people have done with the team profiles, but we'll do the best we can. Later, once the advanced stats from FootballOutsiders update, we'll get a better look at how the teams stack up. For now, the absolute stats we have available seem to indicate a TCU-like overall profile, with a defense that is good, not great, and an offense that is below average. Whether that changes with Clint Trickett at the helm now, we'll find out together. Perhaps, though, S&P+ had a better view of WVU than we thought this past week, when it had WVU significantly higher than FEI?

Indeed, now that I look again, it seems that win pushed them 8 points up in overall F/+, where the Bears are now listed at #3 in the country. We'll talk more about that later. 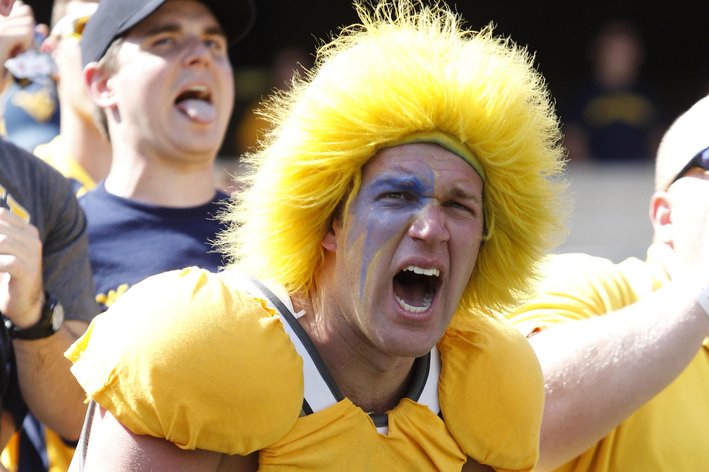 They go a whole 'nother level of hard in West Virginia.

Gone are most of the faces you probably remember from that shootout last year. Tavon Austin, Geno Smith, and Stedman Bailey are all in the NFL now, where they can't hurt us anymore. In their places are names like Clint Trickett, Paul Millard, and Charles Sims (who is really, really good). West Virginia is a significantly changed team from a year ago, relying now on their defense to bottle up opposing offenses and their offense to do just enough. Will it, versus Baylor's high-flying offense, the best in the land? That's the million dollar question this week.