Unconfirmed rumors are swirling that Baylor's situation at defensive tackle, already weakened by the preseason loss of starter Javonte Magee to ... whatever, has deteriorated further because of injuries.

Share All sharing options for: Injury Trouble at Defensive Tackle?

Last night, a somewhat unexpected tweet came across the wire from true freshman DT Byron Bonds, out of Allen HS in Allen, Texas.

Without any confirmation from Baylor, it's impossible to know if he means starting, as in actually starting and being number one on the depth chart, or starting as in playing in his first college game.  Either way, we're in a position, apparently, to pull his redshirt.

The circumstances that got us here are somewhat unknown, as well, but we can do our best. 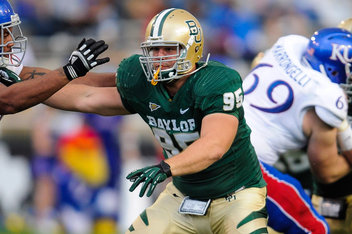 Our situation once looked so positive...

After spring practice ended in April, the Depth Charts we had available at that time had Beau Blackshear and Javonte Magee, sophomores both (RS and true), in the two starting spots.  Then, when Magee went missing during CampBU, sophomore Trevor Clemons-Valdez stepped into the starting spot vacated.  It was that alignment that started both of our first two games and played admirably.  Behind them were Suleiman Masumbuko, true freshman Andrew Billings, JUCO Terell Brooks, Zorell Ezell, and then Byron Bonds, who the coaches clearly wanted to redshirt.

Due to injuries, this whole thing is now a mess.

Billings, the heralded freshman, was injured against Wofford and didn't play this past week.  He reportedly can't put weight on his ankle, and he's got a lot of weight to put somewhere.  TCV, the starter, went down against Buffalo and won't play tomorrow.  Suleiman is presumably available, since he has not yet been injured.  Or so we think.

We have two spots to fill at the starting positions on the defensive line.  If he's available, one goes to Beau Blackshear by default.  Even more than that, he's been really, really good this season.  You'd think the other goes to Suleiman Masumbuko, listed this week as the starter at DT next to Blackshear.  That's why the wording of Bonds' tweet is so important: if he's starting, it's in the place of either Masumbuko or Blackshear.  If he's not, he'll play as one of their backups.  That he'll play is enough of a red flag for me to be concerned, since we wanted to redshirt him and never thought we'd need him.

This is a point of concern for our defense.  Though none of the players reportedly injured are believed to be out for a significant amount of time at this point, we need strong bodies against ULM now.  They ran against us last year, and it makes sense that they'd try again.  This problem has to be the reason why Briles mentioned that we might see more 3-man fronts this week than ever before, and if we do, I'd hope they will be anchored by Blackshear.

I'll update the post with more information as it becomes available.  If you know anything else, please share.