Switching gears a bit, let's take a look at the TCU defense against the high-flying Baylor offense.

We end our three-part look at the TCU Horned Frogs for tomorrow's game with the matchup most likely to favor us, the Baylor offense against the TCU defense. The good news about this portion of the preview is that TCU's defense has lost a bit less in terms of injuries and suspensions. The bad news is that they've still lost a staggering amount, highlighted by probable starters DJ Yendrey (DT), Tanner Brock (LB), and Devin Johnson (NB/S) to the drug thing and DE Ross Forest to a knee injury. Think we had it bad injury-wise? That's four starters gone between spring practice and now. Those losses have led to a situation where there are only 6 upperclassmen in the 2-deep on their entire defense. Only one of them, LB Kenny Cain, is a senior. Cain starts alongside 4 juniors, 4 sophomores, a redshirt freshman, and the true freshman beast Devonte Fields. We'll talk more about him later on. As loaded with future potential as this defense is with younger players getting valuable playing time now, their lack of depth is still a tremendous weakness. And it has, I think, played a role in their defense not performing up to expectations. I'll explain what I mean.

So far this season, according to the absolute stats, TCU is 9th in the country in total yards per game at 274.60, 10th in scoring defense at 13.20, 6th in passing efficiency allowed at 94.17, and 19th in passing yards allowed per game at 181.20. Looking at these numbers alone, you'd think that when we take the field tomorrow evening, we'll do so against one of the very best defenses in college football. We've come to expect no less from Gary Patterson. The problem is that the advanced statistics don't support that. According to S&P+, TCU's defense so far this season ranks 38th. That's not bad by any means and is light years ahead of our own, but it's not great. That overall ranking is dragged down considerably by ranking 48th in pass S&P+, 69th on standard downs, and 60th on passing downs. FEI is much more bullish, ranking the Frogs 7th in defensive efficiency, but the problem there is that it is largely built on yardage allowed. The fact of the matter is that TCU's opponent offenses have been, in a word, horrible. Plus their defense got the benefit of playing one game in monsoon-like conditions in Dallas against the Garrett Gilbert-led SMU Mustangs.

Of the teams TCU has played, only Iowa State ranks higher than 90th in scoring offense at 72. That's higher than you'd expect from being 91 in total yards per game. Grambling State is actually ranked 107th in scoring offense and 91st in total offense in FCS. That means there are 106 FCS schools probably better on offense than Grambling State. Of course TCU is going to throttle them. Kansas is 109th in scoring offense, 87th in total offense, SMU 97th in scoring offense, 99th in total offense ... you get the picture. TCU hasn't exactly faced a murderer's row of offensive teams. The best they have faced, Iowa State, put up 37 points with their backup QB. The advanced stats don't do TCU any favors in this regard, ranking Kansas, SMU, Virginia, and Iowa State 78, 122, 95, and 94 in offensive efficiency, respectively. Baylor is by far the best team TCU has faced this season offensively, and anyone expecting for TCU to shut us down is probably basing that expectation on the ghost of TCU defenses past, not the TCU defense that will take the field tomorrow. But let's find out more about that defense right now.

Across the front four, TCU starts Stansly Maponga (JR, 6-2, 265), one of the very best defensive ends in the country the last few years who hasn't really shown it this season, Jon Lewis (SOPH, 6-2, 290), Davion Pierson (RFr, 6-2, 305), and the freshman sensation Devonte Fields (FR, 6-4, 240). Lewis and Pierson are both stout inside but, like most of the TCU defense, very young. Chucky Hunter (SOPH, 6-1, 305) plays quite a bit in relief of Lewis and, I believe, started last week against ISU. Why he's not starting again is anyone's guess. Maponga and Fields are probably the two biggest concerns I have about this TCU defense because they're both capable of getting to the quarterback on any given play. Even as a junior, Maponga is the most experienced player on TCU's entire team since he started on TCU's Rose Bowl team two years ago. Fields is cut from the same mold now. Keeping them from teeing off on Nick Florence is of utmost importance.

At the second level, Joel Hasley (SOPH, 6-1, 220) anchors the middle of the Frog defense with the aforementioned Cain (SR, 6-1, 225) beside, while Sam Carter (SOPH, 6-1, 220) plays their version of Ahmad Dixon's position. They are all known primarily for speed since they lack ideal size. The starters at safety are Elisha Olabode (JR, 5-10, 192) and Chris Hackett (RFr, 6-2, 200). The cornerbacks are Jason Verrett (JR, 5-10, 180) and Kevin White (SOPH, 5-10, 174). Between them, Verrett and White had only a handful of starts before this season and neither saw much action the last time we played TCU. They've probably never seen anything like Terrence Williams and Lanear Sampson on the outside.

Much like our own Bryce Hager, Hasley leads the Frogs in tackles this season with 37, followed by Kenny Cain (basically a carbon copy of Eddie Lackey) with 26. Fields leads the team in sacks (5.5) and tackles for loss (9.5) with Hasley behind in both categories (2 and 4). TCU's defense made its bones in the same defense it runs today, a 4-2-5 similar to our own base in alignment and purpose but not at all in results. Rather than take you through a huge explanation of the 4-2-5 that I'd have to get from somewhere else, I'll just link you to a Brophy post complete with video of Gary Patterson himself explaining defensive principles, an article from before the Virginia game that talks a little bit more about what they want to do, and, of course, Bill C's season preview that includes a discussion of the Horned Frog defense. There's also a lot more from Brophy available about how TCU's coverages work. Pack a lunch for that one.

Suffice to say that the purpose of the 4-2-5, and the primary reason we run it, too, is flexibility. Using a hybrid LB/S (or in our case, Dixon at the NB) ostensibly gives you a player with the ability to support linebackers in run prevention while also the speed to cover receivers in spread offenses. The two deep safeties are supposed to identify coverage responsibilities and tell the corner on their side of the field, while the MLB handles everything up front. One major difference is that TCU lines their SS much closer to the line than we typically do. Here's a screengrab from the TCU-Kansas game to illustrate the point (#17 is the SS Sam Carter). 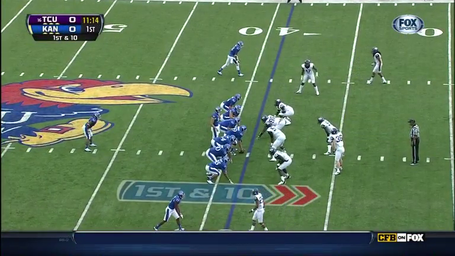 That image is courtesy of Frogs 'O War, and you can see the aftermath of that particular play in the subsequent images from that same post.

The only two players in the formation above not seen are the safeties. Everybody else is within 7 yards of the ball. Pretty crazy, right? If you'll recall the game last season, that's standard for Patterson's defense. They don't play quite as tight of man defense on the corners as Sam Houston State did against us with remarkable success, but they do keep their corners much closer than we're accustomed to seeing. That's one thing I wish we would borrow since it doesn't appear to be a decision based on talent. That's just how they play, as you can see from the game last season. We took advantage of it by challenging their corners repeatedly. I think we'll do so again.

What Can We Do

I think I basically just said it. We beat TCU by forcing their CBs to cover our receivers repeatedly down the field. We protected Robert Griffin III well enough for plays to develop and just beat them. So far this season we've been, if anything, even more obsessed with the deep ball than we were last year, so I would expect to see us do the same thing again. I would also expect quite a bit of the play action we ran to great success last season based off attacking TCU's relatively vulnerable interior line. If Iowa State can run for 150 yards on TCU's defense, we should be able to, as well. Jarred Salubi needs to build on the early success he had against WVU and hit the holes just like he did in that game. That would stop my calls to FreeLache for at least a few minutes. If we can get Glasco going, too, it will force TCU to bring their safeties up to stop the run and open things up down the seam where Tevin Reese loves to roam.

Everything starts on the offensive line protecting Florence. Patterson doesn't like to blitz and will rely on his front four to get pressure. If we can stop Fields and Maponga from doing so, we can have success against this defense. This game should be a great challenge for our young tackles leading into Texas next week, as they'll probably be facing the best two pass rushers yet this season. Spencer Drango will draw Fields on the vast majority of plays while Troy Baker will get Maponga. Baylor's offensive outlook, at least in the passing game, relies on their ability to stop those two guys.

In the running game, we need Cyril Richardson and Jake Jackson, our starters at left and right guard, respectively, to help Ivory Wade clear a path on the inside. We haven't run the ball this season near as well as I expected given the talent we have at RB and on the offensive line. As we play defenses with better skill in the secondary, we need to change that. Tomorrow looks like as good a time as any to start.

The prediction thread is going up right at 2:00 today, so look for that!