One way or another, the Baylor Bears will prove themselves to the doubters tomorrow. Hopefully, it will be as a legitimate power in the Big 12 and not a fraud. Time to make a call.

UNIFORMS: EVERYONE IS WEARING BLACK, THIS SHOULD BE CLEAR BY NOW. In case it isn't... 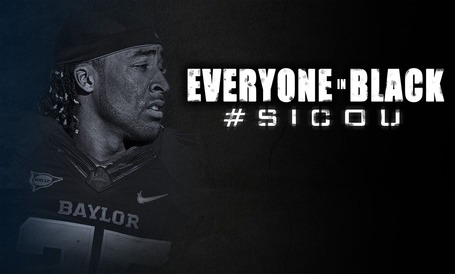 Baylor-- No major injuries to report. All players expected to play should, including Antwan Goodley, who was taken out of the Kansas game for precautionary reasons.

That's all I've found so far. If anyone has additional information, please let me know.

Wants you to wear black.

The fine folks at Statmilk.com have provided us with an outstanding infographic for this game that tells you just about everything you already knew in a prettier way than I can. 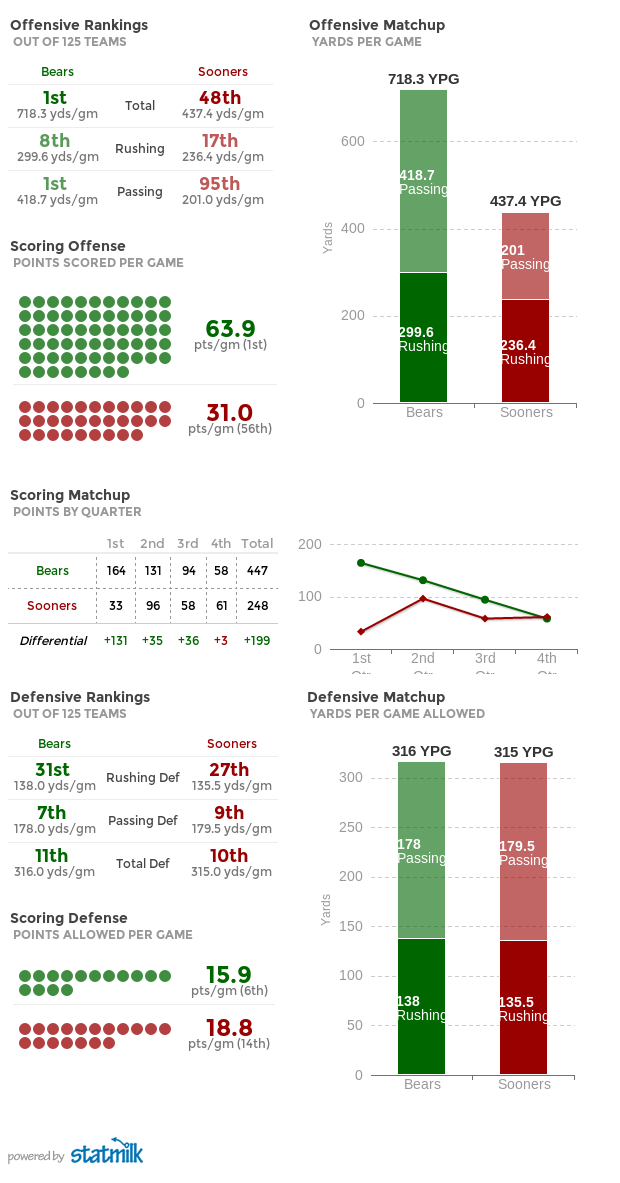 Thoughts on the Game:

At this point, we've said basically all there is to be said. The stats show that Baylor is a big favorite in this game for a reason, but those stats are based off of games Baylor has played against admittedly weak competition. We believe they show the truth: that Baylor is an elite team in CFB this season and needs only the opportunity to show it against better teams. Others doubt.

Art Briles and that Punk Offense in Waco 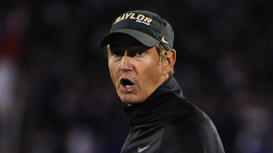 By almost any measure, Baylor will take the field tomorrow against the best team we've faced so far this season. Oklahoma isn't great, as evidenced by their solid but not spectacular ranks on both offense and defense, but they're good. And they know by now exactly what they have to do to beat us. Whether they can do it is another question entirely. I believe strongly that our offense, with Bryce Petty, Antwan Goodley, and Tevin Reese dominating through the air while Glasco Martin and Lache Seastrunk punish on the ground, is at worst one of the best in the country. OU's defense, strong as it is, will not be able to stop it consistently. They do, however, present unique obstacles that will have to be overcome in the secondary and rushing the passer.

As Bill Connelly noted in the Thursday preview linked above, OU's defense is a little different than what we've seen in the past. They switched in the offseason to a look more like the 3-3-5 that West Virginia and ULM have used recently in an effort to get more out of their pass rush and disrupt opposing defenses with variable looks. So far this season, however, it has resulted, at least in part, in a significant dropoff in efficacy against the run, a weakness that the Longhorns took advantage of to great effect. With Seastrunk and Martin running behind Cyril Richardson and friends up front, we should be able to replicate that success, if not expand on it. It is important that we do to open things up for the passing game through play action.

For the Sooners, it isn't just important to run the ball, it's critical. As Blake Bell himself told ESPN, OU cannot afford to get into obvious passing situations, lest the Baylor defense be able to take advantage of the ensuing predictability. Expect OU to attempt to grind out possessions on the ground and through short passes designed to keep the chains moving, limit the risk of turning the ball over, and keep Bell from having to win the game with his arm.

To stop that from happening, I expect that Baylor will treat Bell exactly as it did basically every QB before him this season, daring him to throw over the top and limiting everything short. It's the same strategy we've seen teams use against Bryce Petty, except we can beat it on offense because Petty is actually really, really good.

Eric Striker vs. Spencer Drango -- This is obvious. Striker is their best remaining defensive player, and we have to account for him. His best asset is pure speed. He will try to run around our tackles rather than go through them.

Blake Bell vs. Bryce Hager and Eddie Lackey -- My guess is that on downs where OU has to pass, you'll see Phil Bennett bring a variety of pressure packages to bear in an attempt to make Bell as uncomfortable as possible. OU's OL is good enough that we probably won't get pressure with just the front four.

Bryce Petty vs. the OU DBs -- I say Petty because the likelihood that Goodley, Reese, Corey Coleman, and Jay Lee get loose is probably pretty high. OU knows that and will attempt to confuse Petty with a variety of coverages.

This summer, Ian Boyd wrote a very popular series of posts on how you stop the Baylor offense for FootballStudyHall.com. I suggest you read them now if you haven't already. He tweeted a bit about Baylor this afternoon.

Baylor's speed and drops at linebacker are going to kill the OU pass game tomorrow. They're similar to MSU in their D. Cover-4 w/ tight S's.

Baylor also loves to fire their LB's up the gut on 6 man blitzes like the Spartans do.

OU's hope is to kill the Bear DL with their zone stretch run game, which is possible.

It's good stuff, you should check it out. He also teased a coming article on this game that I will post as soon as it is up.

You're not going to believe this, but I like the Bears. I took them in Sunday's podcast and I'll take them now. I think the offense is able to run enough on the Sooners' front to open things up down the field. Baylor sells out against Brennan Clay and Damien Williams to stop the run, and Bell is unable to take advantage enough to overcome our offense.

In front of the greatest crowd in Floyd Casey Stadium history, Baylor gets up 14 by the half against the Sooners and extends the lead the rest of the way. The starters play the whole game not because they have to but because the time for letting off the gas is gone. Baylor crests 600 yards and 50 points again in the fourth quarter.

Share your predictions for this game in the comments and vote in the poll below!