We don't have much to go on considering the teams have combined to play two games this season, but we have a little. What can we expect from the Buffalo Bulls this weekend at Floyd Casey?

Share All sharing options for: Week 2: Baylor vs. Buffalo Preview

Last week, Baylor ended up involved in a blowout of a game that many, myself included, didn't expect. I didn't expect that we'd be able to impose our will on Wofford as easily as we did, even though I set out the basic roadmap early in the week: score quickly to get Wofford down, then watch their offense struggle to keep up. I guess I shouldn't have been surprised, given the endless sunshine pumping I've done about our team, that it worked out so flawlessly. 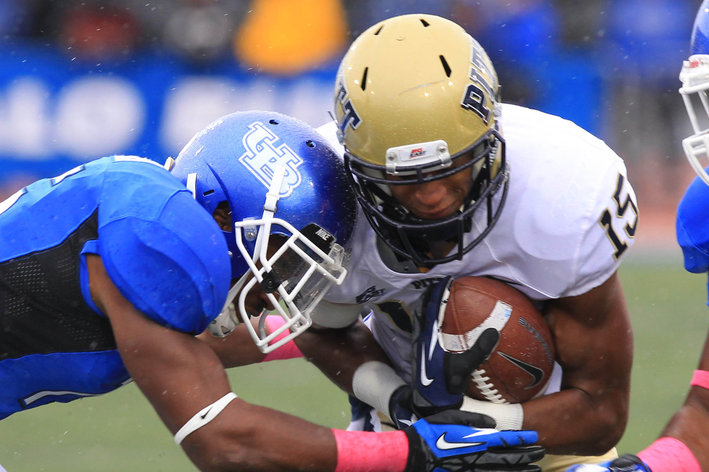 Bill C's preview of the 2013 Buffalo Bulls, coming to FCS this weekend.

Normally, when previewing our opponents, I like to come from a more statistical bent, considering I am not an expert in football or anything close to it, and we don't have that much film to break down, anyway. Also, my ability to craft spectacular video previews like the latest from S11 aren't that great, anyway. But this early in the season, statistics, while not meaningless, are certainly not as meaningful as they will be.

Still, now is as good a time as any to preview what I'll be doing in the previews as far as statistics, all of which are taken from FootballOutsiders.com. Starting at about the Texas game last year, I began using the format below, designed to put together all of the relevant information from FO that might shed some light on the matchup for that week. Then, when the season ended, I was able to combine all of Baylor's information to see how we progressed through the year. The stats ended up showing about what we expected: Baylor's offense, though dynamic the entire season, improved when Lache Seastrunk started getting the ball. Our defense, though still far from good, also improved over the course of the last few games.

So that's what this is about-- finding information and presenting it in a way that makes sense. If you need primers on what each statistic really "means," feel free to ask in the comments or head over to FO and read their descriptions. Basically, they take the tack, with which I wholeheartedly agree, that absolute stats are not nearly so useful as people believe, especially where each of the 125 teams couldn't possibly play every other, and schedule strength varies widely. But even more than that, pace (or tempo, as we've called it) matters. Baylor's defense, for example, probably looks a lot worse in the absolute stats than it really is because we give (making up these numbers) opponents 15 possessions a game instead of 8. Our offense scoring as many points as it does, as quickly as it does, skews the numbers.

As you can see, because it's so early in the season, most of FO's metrics haven't updated from 2012. That's normal for the way they work. The ones that have are also very largely influenced by preseason projections. That influence will step down progressively over the course of the season until about Week 7, when everything will be based on what has actually happened this year.

From what we do have, this game seems a bit of a mismatch. Baylor's offense is just as good as expected (through one week), while the defense has received the benefit of a major surprise in holding Wofford to only 3 points and 240-ish yards. Buffalo, on the other hand, is strong on neither offense nor defense according to these metrics. Just to reiterate, we're dealing with an incredibly small sample size here that is in no way definitive of who these teams are; still, data points are data points, so we should not ignore them.

OLB Khalil Mack -- #46 -- National Defensive Player of the Week after the Buffalo-Ohio State game. Any discussion of the Buffalo defense starts with Mack, easily the best player on their team and the single best defensive player we will face for several weeks. He's a future first rounder to the NFL and a dynamic player at OLB. He's within striking distance of NCAA records for career tackles for loss and forced fumbles, and he will be a tremendous challenge for our tackles (or running backs) in pass protection, as well as a force against the run. He's a great player. I can't stress that enough.

RB Branden Oliver -- #32 -- At some point this season, he's almost certainly going to become Buffalo's all-time leading RB. That's who he is. Against Ohio State, he rushed for 73 yards on 26 carries. He's a complete back who is decent at everything, and he will be their horse. Expect Buffalo to run the ball repeatedly, as they are a balanced offense in the traditional sense, and especially so on first and second down. Baylor has to stop him early and force the QBs to beat us through the air.

WR Alex Neutz -- #19 -- Had 9 catches for 98 yards last week against Ohio State and is the clear #1 WR for the Bulls. He's 6-3, 200 pounds and plays on the outside for the Bulls. When they need yards through the air, the ball will probably go to Neutz or one of Buffalo's tight ends, which are a big part of their offense, as well. Baylor will probably put Joe Williams on him to start the game, at least, since Demetri Goodson is coming back from a very minor injury that kept him out against Wofford and may not be at full speed. Williams gives up a bit of size to Neutz, but he should be able to stay with him.

QB Joe Licata -- #16 -- Should be the starting QB for the Bulls, since he is listed as such on their latest depth chart. He's a pure pocket passer that won't run with the ball much, and he has decent size at 6-2, 226. You may see former starter Alex Zordich get a little time here and there in a Belldozer/Collin Klein-esque role, but Licata is probably the guy. His deep balls sailed on him against Ohio State, though I haven't read that arm strength is an issue. They will, no doubt, try to throw the ball against us more than Wofford did, and Licata can make most throws.

TEs Matt Weiser (#89) and Jimmy Gordon (#81) -- These are the TEs we probably need to worry about, at least until Gordon realizes his calling as the Commissioner of Gotham PD. Buffalo's offense keys hard on the TEs, making Sam Holl and Eddie Lackey very important parts of our defensive gameplan, as well as Terrell Burt and Ahmad Dixon from the safety position. They are Licata's safety valve, and he's not afraid to use them.

As Bill C mentions in the preview linked in the sidebar, the Buffalo team we're going to be facing this weekend is extremely experienced, bringing back 17 starters from last year's squad. Combined with good coaching, that probably means they won't make stupid mistakes. Two of the starters they lost from last season were on the offensive line at RG and RT, so it will be interesting to see how their replacements fare in their second game. Overall, this is how they finished last season offensively, again by FO's advanced metrics.

More: Depth Chartin' Baylor (From Bull Run, the blog for the Buffalo Bulls)

Last year, the bane of the Buffalo offensive existence was passing downs, where Zordich and Licata both struggled mightily. Passing downs are defined by FO as 2nd downs with > 8 yards to go and 3rd downs with > 5. It's not 2012 anymore, obviously, but if Baylor can stop Oliver on first and second down, forcing Licata to throw the ball in an obvious passing situation on third down, we will be much better off. That is not shocking information.

Here are the same stats as above for the defense, which was middle of the pack by S&P+. Yards/Game made them look better than they were, probably as a result of the teams they played. The MAC, though an offensive conference, is still not especially good competition.

It's interesting that in 2012, Buffalo didn't have an obvious weakness against pass or rush. It's not entirely unusual for a team to be better on passing downs than standard downs, especially where you have a wildman like Khalil Mack bearing down on opposing QBs. Once again, blocking that guy is absolutely critical. There is nothing more important in this game. They run a 3-4 defense which, when spread wide, actually looks somewhat like a 3-3. Check out S11's breakdown of their defense for more specific information about the scheme itself. It's quite good (the video, I mean).

One other thing worth noting is that, as Bill C notes, Buffalo's special teams might be even more "special" than our own.

Connelly attributes this deficiency to an overall lack of depth, something that probably improved only slightly coming into this season, if at all. Buffalo's worst nightmare has to be giving Baylor big returns to jumpstart an already big offense, and it looks like that could be possible this week. They were pretty awful in almost every regard last year.

Earlier this week, I read someone say that Buffalo might, if it's possible, match up better with Ohio State than Baylor. I think that's probably true, if only because it's nearly impossible to replicate our tempo and offensive pace in practice conditions, as Wofford found out last week and Big 12 defenses continue to realize year-in and year-out. I expect that from Baylor's side, you're going to see much of the same thing as last week. Early in the game, we're going to work hard to establish the run, using it to build up the pass. You might see more of our offense used than what we showed against Wofford, but probably not much. Unless something bad happens, Bryce Petty won't be asked to take the Ferrari out on the highway, if you catch my drift.

Like in the Wofford game, if Baylor can come out once again and build a lead, it may prove impossible for Buffalo to claw their way back in. Their offense isn't built for huge plays or quick scores; they want to deny us the ball, move down the field in pieces, and score methodically. Their best hope is to create turnovers, frustrate Petty by turning Mack loose, and grind us down a bit with Oliver. I don't think that's going to happen. I'll save my prediction for this afternoon, but you can probably tell I'm going to take Baylor with a comfortable win.