What Can Art Briles, Quarterback Whisperer, Do with Five Years of Bryce Petty?

An in depth look at the progression of Briles Quarterbacks.

Share All sharing options for: What Can Art Briles, Quarterback Whisperer, Do with Five Years of Bryce Petty?

The list of protégés who have worked under Art Briles continues to grow, with the growth in the trophy case is only matched by the growth in expectations - by both coach and fans. The list includes a Heisman winner, first and second round draft picks, 4 All Conference Quarterback awards, and 3 quarterbacks to start an NFL game with a 4th on the way.

But with Senior QB Bryce Petty, Art Briles will get to experience a first: a quarterback who has worked in his system for 5 years. After 3 years spent backing up Robert Griffin III and Nick Florence, Bryce Petty finally got his chance to start last fall and put up a phenomenal season with 4200 passing yards, 32 passing touchdowns, 3 Interceptions, and garnering All Conference honors. As we approach the start of the 2014 season, the question becomes: What next?

They say that you can't know where you're going until you know where you've been. So let's take a look at where Art Briles Quarterbacks have been. This chart shows the QB Rating of Art Briles' quarterbacks from 2003-2013, grouped by the number of years that they had in his system. Note, this only includes years enrolled, not years in a starting role. 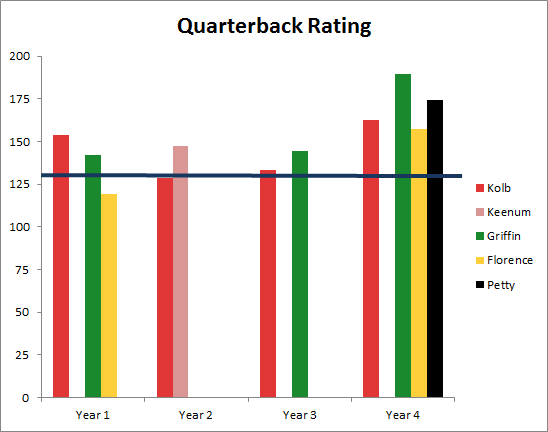 Since QB Rating has a weird scale, I added a horizontal line showing the average QBR over this time frame (around 130). One thing that quickly stands out is that there has only been 1 season of significantly below average QBR over the 11 years shown. That's especially remarkable in light of Briles starting a true freshman 3 times. Moreover, the exceptional performances of the 4th year QBs under Briles is readily apparent. If an outsider questions why we respect and love Art Briles so much, consider this: Quarterbacks who spend 4 years with Art Briles have averaged a QB Rating of 171, which is almost exactly what Teddy Bridgewater put up in 2013, good for 5th in the nation.

As mentioned previously, this will be Art Briles first year with a 5th year QB, so a deeper investigation is needed to find relevant data. A closer look at the data above shows that there is a general trend toward improvement by the QBs. Below, this is charted as percent above or below average QBR. Once again, you'll note very little below average. 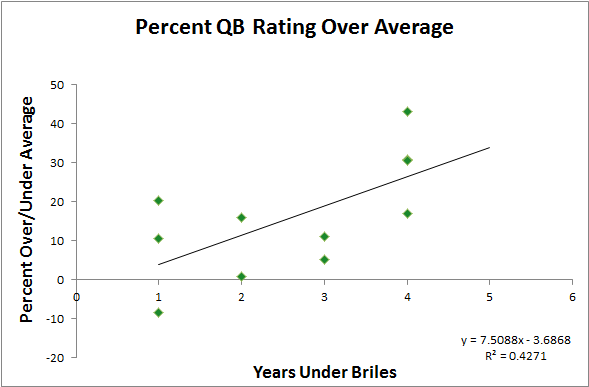 Also, you'll note a trendline, representing a simple linear regression. We'll skip the gritty details here* and instead focus on two points. First, with an R^2 of 0.4271, there is some correlation between amount of experience under Art Briles and performance, but it's clearly not the only factor. That's not surprising in light of the complexities of football development, but keep in mind that this is just a basic projection.

The second is that using this data, the average QB that Briles has had over the past decade would be expected to be 33.8% over the average QB Rating in their 5th year. For 2014, that likely projects to a QBR of 180, which would have been 2nd highest in 2013 and represents the 6th highest QB Rating in the past 5 years. There is certainly evidence that Bryce Petty is better than the average Briles QB in his excellent first year, strong arm, and his NFL Draft projections. The aforementioned formula can be used to find an annual percent improvement, which would be 6.55% here. That would give a QBR of 185.7, higher than any QB except Robert Griffin III and Russell Wilson over the past 5 years.

Yet, an important question remains. After such a fantastic year, what will it look like for Bryce Petty to improve? His overall statistics for 2013 are very strong due to the early dominance of the Baylor offense. Obviously, the most important way that he can show improvement is to lead Baylor to more wins than last year. But more specifically, there is one area that stands out as a weakness compared to the rest of his stats.

Fortunately, there is precedent for improvement. In Kevin Kolb's 4th year, he improved from 45th to 7th in Completion Percentage. Somewhat similarly, the otherwise excellent RG3 improved his yards per attempt from 34th to 1st in his 4th year.

With a year of valuable starting experience under his belt, Bryce Petty was able to spend the entire offseason getting healthy and fine tuning specific weaknesses instead of preparing for the many unknowns of a starting quarterback job. Here's hoping that Art Briles excellent history in perfecting quarterbacks continues.

*Some gritty details: This is a stat that encompasses many things - QB quality, offensive quality, quality of defenses faced - and so projecting based only on one variable - experience - makes this only a rough projection. This isn't intended to discover all of the variables that correlate with success. Also, it's likely that a linear regression isn't the best model for how QBR progresses with development time. The problem is that there are few relative data points, both due to the large groupings of years (instead of say months or semesters) and that limiting this to Art Briles only leaves 11 data points. My guess is that development is more of a sigmoid function, wherein there is an initial period of struggle, a period of rapid improvement, and then a tapering off in the rate of improvement. There is only so good a QB can get; moreover, it's a lot more difficult to move from elite to hyperelite than it is to move from average to above average.