The season of the 8,000-person Watch Lists has begun, and it seems that Baylor will be well-represented once again.

We are, once again, in that special time of the year where football is clearly on the horizon but not here yet, and the preseason magazines and watch lists have started gearing up to fill the void.  For this week, that means Watch Lists, those behemoth, and often meaningless, preseason rolls of (just about) every player whose inclusion is deemed necessary to avoid potential embarrassment in five months or so.

A year ago, this week culminated with Bears mentioned for more than 10 preseason awards, ranging from the Maxwell, given to the best offensive player in CFB, to the Outland, best OL, and the Thorpe, best DB.  Now, as then, to catalog the honors as they come in, I will create a storystream to organize everything in one place followed by a wrap-up post when all are done.

The first two awards to announce this year are arguably the two biggest outside of the Heisman itself: the Maxwell, addressed above, and the Bednarik, given each year to the top defensive player in CFB.  The former went last season to  Alabama QB A.J. McCarron in stunning fashion, while Pittsburgh DT Aaron Donald picked up the latter after his incredible season.

This year, Baylor is one of just six schools in the country to put three players-- QB Bryce Petty, WR Antwan Goodley, and RB Rashodrick Linwood-- onto the preseason Watch List for the Maxwell Award, reproduced below in its entirety: 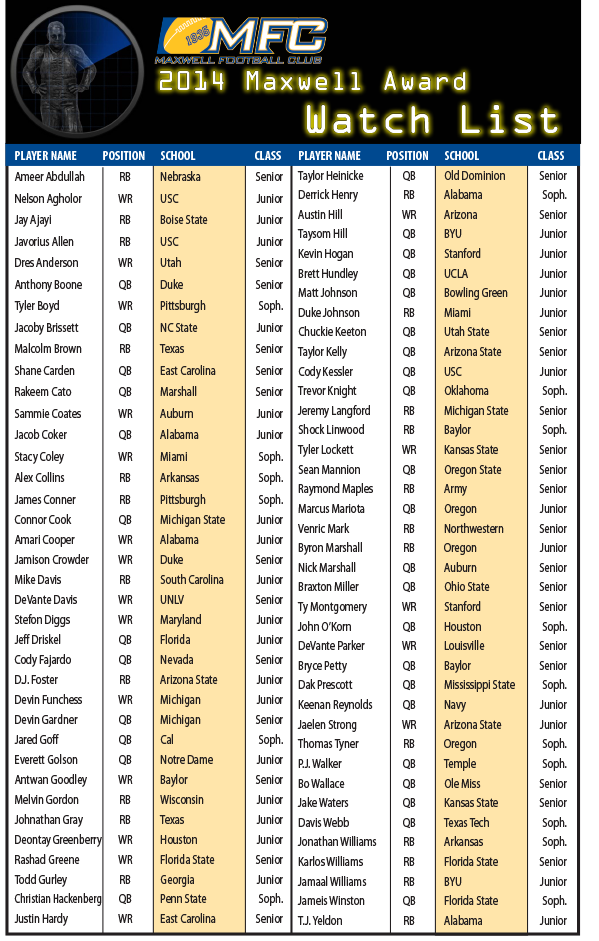 The Big 12 as a whole put 9 players on this list.  Baylor led with the aforementioned three, who were joined by Tyler Lockett and Jake Waters from Kansas State, Johnathan Gray and Malcolm Brown from Texas, Trevor Knight from Oklahoma, and Davis Webb from Texas Tech.  I'm going to go out on a limb and say this won't be the last time I do a post about our three guys with the O'Brien, Walker, Walter Camp, and Biletnikoff lists coming up soon.

Moving across the line of scrimmage to the Bednarik Award, two Baylor players were included in its release this morning: LB Bryce Hager, who made the watch list last year at this time, and DE Shawn Oakman.  They were two of the fourteen Big 12 defenders so honored, joining three from TCU, Texas, and Oklahoma, and one each from West Virginia, Kansas, and Kansas State.  That full list: 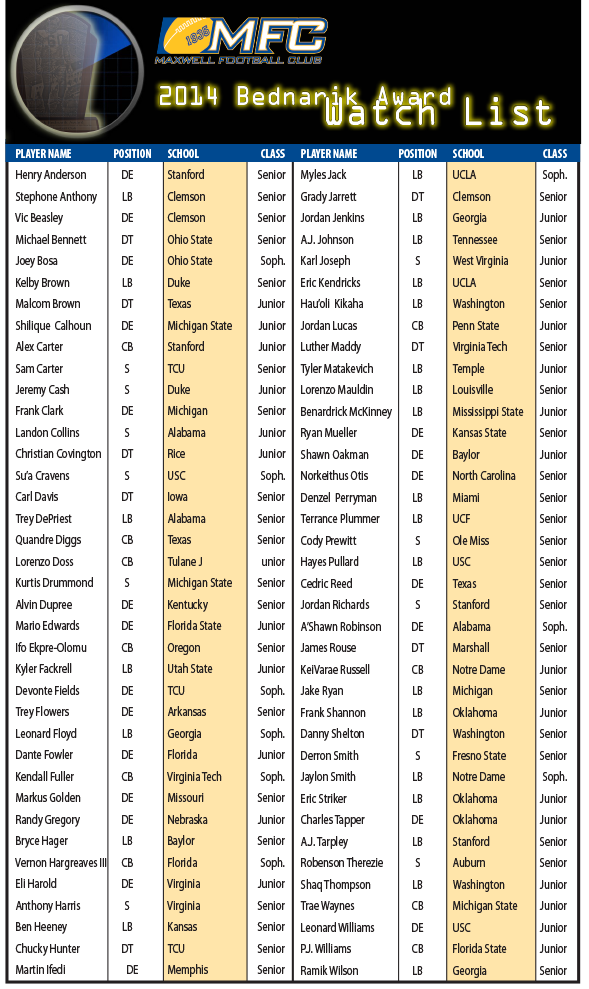 The remaining schedule of Watch Lists, in case you're curious: