The Executive Council of ODB, having achieved a quorum upon the positive votes of Messrs Moore and Francis and assuming similar responses from Messrs Pope, Thermhere, Conner, and Kelly and Ms. Morrison, has decided to bestow upon Randall Cunningham, Sr. honorary membership in Baylor Nation. 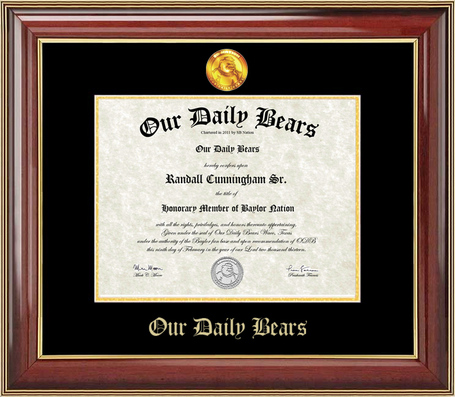 To Baylor Nation and whom it may concern,

By decree of the Executive Council of Our Daily Bears, let it be known that a worthy addition has been made to the ranks of Baylor Nation in Randall W. Cunningham. The Council has not made this decision lightly, having considered all of the aspects of Mr. Cunningham's career and the way with which he has comported himself in public life.

Therefore, in light of an exemplary career in professional sport, including accumulating 30,000 yards, 4 All-Pro honors, and the 1990 MVP award,

Insomuch as he has been a superlative leader and father, including becoming an ordained Protestant minister, founding the Remnant Ministries in Las Vegas, Nevada, and served as a coach on his son's football team,

Insomuch as he his exemplary career and personal life served as role model for the greatest football player in the history of Baylor University, one Robert Griffin III,

In light of his support for the football program at Baylor University,

Let it be known that Randall W Cunningham has been bestowed the title of Honorary Baylor Nation Member, with all of the rights, privileges, and honors it grants.