The intrigue about who should be the #2 team in the country following Alabama's loss has officially begun, as the SEC homers argue that a 1-loss SEC Champion should definitely make the leap over an undefeated Ohio State. It's silly season!

Share All sharing options for: Baylor Stays Put at #9 in BCS Rankings

Well, the outcome I didn't expect to happen, happened. South Carolina, winners last night over a former top-10 team in the Clemson Tigers, jumped us to #8 in the country. The Gamecocks season has ended until the bowls. 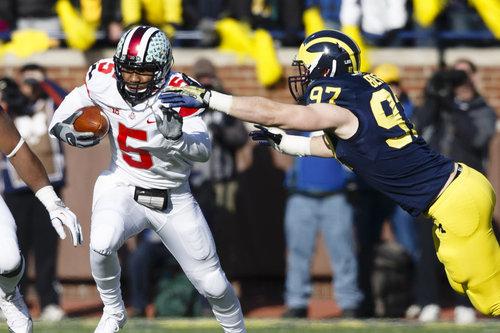 With one week to go before the BCS rankings leave us forever, an undefeated Big Ten power is in serious danger of missing out on the national championship.

We can probably assume that a relatively lackluster performance against TCU last night cost us tremendously in the human polls, allowing South Carolina to make up the ground they needed to jump us after beating Clemson. It probably doesn't matter where we're ranked relative to them at this point except for pride simply because the SEC can only have two teams in the BCS in any given year, and those spots will go to the winner of Auburn/Missouri and Alabama, for certain. Baylor remains #9 in the country, our highest ranking ever for this late in the season. We're not a player in the National Championship race, nor can I argue we should be, but it's entirely possible that we can snag an at-large bid for our first BCS bowl in program history. Let's hope. All Baylor can do at this point is beat Texas this coming Saturday in the final game in Floyd Casey Stadium history.

It's important to note that NIU is now #14 in the country, exactly where they need to be to earn a BCS berth as an automatic qualifier from a non-BCS conference. Because they are higher than UCF, the champion of a BCS conference (the American), and ranked in the top-16, they will probably get a spot in the Fiesta Bowl. Congrats to Jordan Lynch!

Below are the latest rankings as announced on ESPN. When SB Nation provides the entire BCS formula for this week, I'll update the post! The Big 12 now officially has 4 teams in the BCS rankings, headlined by Oklahoma State at #6 and followed by Baylor (#9), Oklahoma (#17), and our next opponent, Texas (#25).