I don't really mean that, but I kinda do. Baylor's offense was horrid for the vast majority of the game, and without the benefit of 3 TCU turnovers leading directly to touchdowns, the Bears would have lost.

Share All sharing options for: Baylor Beats TCU 41-38 in Worst Game Ever Played

We could talk about this game for months.  Bryce Petty, for so long a Heisman-worthy QB for the Bears, looked timid, indecisive, and completely out of sorts.  If we found out tomorrow that he's been nursing the effects of a concussion, it wouldn't surprise me at all.  Otherwise, he was just bad.  The long passes that were right on the money early in the season weren't close.  Every dropback on third down became something of an adventure, with the potential for an awful sack basically equivalent to that of a drive-extending completion.  After putting up over 200 yards in the first quarter through a dynamic offensive scheme that kept TCU on their heels (including, shockingly, passes to Jordan Najvar!), Baylor had ~150 over the rest of the entire game.  Antwan Goodley wasn't a factor.  The only positive offensively that I can think of is that Glasco Martin and Lache Seastrunk, both of whom missed the Oklahoma State game a week ago, returned. Seastrunk even went over 20 carries for the first time in his collegiate career. 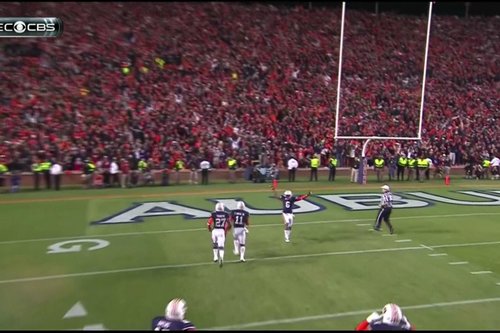 Auburn wins. Alabama won't three-peat. And the way it happened was absolutely insane.

Everything else not related to the defense was basically a disaster.  At times, especially late, our playcalling made no sense.  We ended up trying to milk the clock when everything experiential tells us we just can't do that.  Penalties were a disaster, as we not only gave TCU opportunity after opportunity, we also lost one of our best defensive players for the first half of next week's game due to a play Ahmad Dixon knows he absolutely cannot make.  Sure, some of those calls were questionable at best, and I still think Aaron Jones made that field go.  Still, if a TCU fan turns up right now to say that the better team lost this game, I'd probably agree.

But it doesn't really matter because we won the game, the defense played fairly well, and, oh yeah, I just watched the most incredible ending to a game that I've ever seen, bar none (the one where Auburn returned a FG for a game-winning touchdown after the clock had run out).  So all I'm thinking is that Baylor is now 10-1 (7-1) on the season for the first time ever, still in control of our destiny as far as winning our first Big 12 Championship.  Wisconsin also lost, potentially opening a spot for us in a BCS bowl should we beat Texas.

We don't have to talk about how unlikely beating Texas suddenly seems given that our offense is a mess and it took 4 turnovers to beat TCU.  Winning on the road is tough?

Players of the Game:

I had a really hard time figuring out an offensive player of the game.  They were that bad.  I also have no idea where we'll be ranked tomorrow.  Thoughts to come later tonight, probably.

And don't disrespect my coach when you couldn't walk a day in his shoes.

And don't disrespect my coach when you couldn't walk a day in his shoes.