Baylor ranked in Top 5 of BCS for first time in program history!

For the third week in a row, the Baylor Bears have set a new record for highest BCS ranking in program history or tied that set the previous week. This week, the Bears are ranked fifth behind only Alabama, Florida State, Ohio State, and Stanford.

Share All sharing options for: Baylor ranked in Top 5 of BCS for first time in program history!

With two teams above us facing off the same night we played Oklahoma, it was inevitable that Baylor would rise in the BCS rankings this week provided the Bears won over the Sooners.  Relatively few predicted that it would be the Oregon Ducks that fell, but after Stanford bulldozed their way out to a 23-0 lead in Palo Alto and Oregon's furious rally fell short in the waning moments, it happened.  Now, Baylor sits behind only the consensus 1-2 in Alabama and FSU, B1G favorite Ohio State, and 1-loss Stanford. 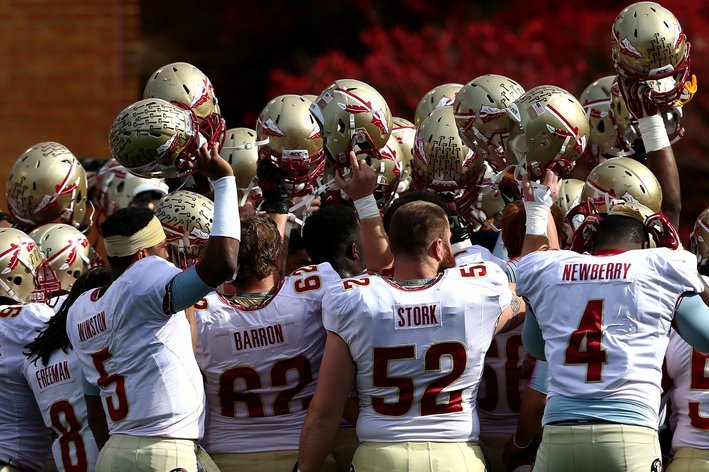 The complete BCS rankings with figures and polls.

Despite the fact that LSU predictably failed to unseat Alabama last night and FSU rolled over Wake Forest, plenty changed for the Bears even if it didn't seem to.  Going into this week, Baylor needed 2 of the top 3, at least, to lose in order to have a chance to play for the national championship.  Oregon complied.  In addition, we made up considerable ground in both the computers and the human polls on Ohio State, a fellow undefeated I didn't include in the "top 3" above that we'll have to pass.  After last week, my belief in Baylor's ability to pass tOSU by simply winning out had started to wane.  Now, seeing where the rankings are with tOSU's bye and Baylor's dominant victory, I feel good about it again.  The same goes for 1-loss Stanford.

The only problem is that the outcome of those games don't change anything with respect to FSU or Alabama.  Without a loss by either program, we won't (and shouldn't) pass them, blessed as they are with strong rankings and conference championship games.  I'll take needing just one loss versus needing two, though.  Once again, the complete schedules for each of the BCS Top 5, basically the only teams with any chance at this point of playing for the National Championship.

Baylor's matchup with Oklahoma State, now ranked in or near the top 10 in both human polls and likely to rise further with a win over #24 Texas this weekend, looms large.  Should OSU pull that win off in Austin, that could be a de facto Big 12 Championship in Stillwater.

As for the others, we've officially reached the point where I would be shocked if FSU dropped a game the rest of the way.*  They're going to play for the national championship barring unpredictable, ridiculous collapse.  Alabama is not nearly so certain; they (probably) have two top 10 teams left on the schedule in #7 Auburn (Iron Bowl) and #9 Missouri (SEC Championship).  Ohio State probably doesn't lose any of the games listed on the schedule above, but they could get an impressive Michigan State defense in the B1G Championship.  Nobody uglies the game like the Spartans.
*Unless Duke meets them in the ACC Championship game and devises some incredible mirror-based system for eliminating Winston's ability to see anything at all.  Then all bets are off.  This is now my preferred outcome.
The next game on Baylor's schedule is this weekend against the Texas Tech Red Raiders in Arlington.  Buy your tickets now!