Baylor's 3-4: The Defense That Dominated SMU And Could Change Everything

On Sunday, Baylor threw a modified 3-4 defense at SMU that the Mustangs simply could not figure out. The success of that defense could be key to Baylor's hopes this year.

Share All sharing options for: Baylor's 3-4: The Defense That Dominated SMU And Could Change Everything

Over the last couple of years, no single concept related to our defense has enthralled me quite like the possibility that Baylor might run a defense with a 3-man front.  If you've been here for a while, you've seen me talk about it every single spring since about 2011, always hoping that this next year would be the one where we saw what was run in practice put to use.  Other than brief spurts against SMU and West Virginia in 2012, we never did.

Now we finally have.  On Sunday night against SMU, Baylor took what had been the Loch Ness Monster of defensive practice rumors and used it to devastating results.   With Shawn Oakman as one pillar at DE, Andrew Billings manning things in the middle, and Jamal Palmer opposite Oakman, this alignment basically shut down the Mustang offense when used, giving Baylor a flexibility at the linebacker position that is as intriguing as it was dominant.

To get more information on what this might mean, I reached out to Ian Boyd of SBNation and InsideTexas.  From his comments on Twitter and FootballStudyHall, I knew he'd seen it in action and was impressed, as well.  You may have seen Ian on the boards this season and last, or you may remember him from any of the three different pieces he's done in the last two years on Art Briles and the Baylor offense, the most prominent being the longform from last year: The Art of Offense.  Before we get to what he had to say, let's figure out what we're talking about. 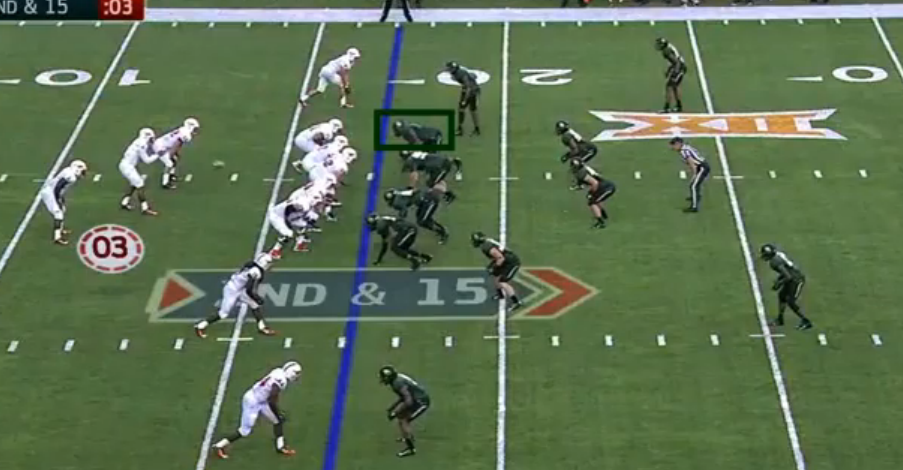 Though the picture isn't exactly fantastic, this is basically how Baylor's base 4-3 defense looks on any given play.  Across the front, you have the aforementioned Palmer and Oakman at DE; Billings and Beau Blackshear at DT; Aiavion Edwards and Bryce Hager at OLB and MLB, respectively; Collin Brence at NB; Terrell Burt and Orion Stewart as your safeties; and Ryan Reid and Xavien Howard as your corners.  This is the standard Baylor defense we've come to know under Phil Bennett.*

*In this particular play, we were showing a corner blitz with Howard on the right side, so Stewart is lined up on his receiver about 8 yards off the ball.  Don't let that fool you.

In years past, we've played entire games only from this defense, which is designed to occupy blockers with the four down lineman and let speedy linebackers flow over the top of the play.  Because you have four linemen, though, you only have 3 linebackers, so the width of your defense at the second level is determined by how fast those guys are.  Also, from Ian:

The base coverage for Baylor, Cover-4, uses the safeties to pick up the slot receivers in man coverage if they get downfield. This means the outside linebackers can play the edge if there's an outside run without worrying about being in run-pass conflict because the safeties will be waiting to pick up the receivers.
The problem, when you line up with four rushers and seven pass defenders, is that you are going to be short-manned to one side of the field or another. Last year teams would often put two receivers to the boundary side of the field so that quick routes to the boundary slot would have to be covered by either the weakside linebacker widening out and leaving the box or by the "down" safety either playing with a huge cushion or dropping down.
It was a good way to try and keep Lackey or Dixon from having as much impact on the run game by giving them an assignment that drew them away from the action.

Basically, with only 3 linebackers, we could be out-numbered on a given side with receivers, opening us up to attack on the boundary. 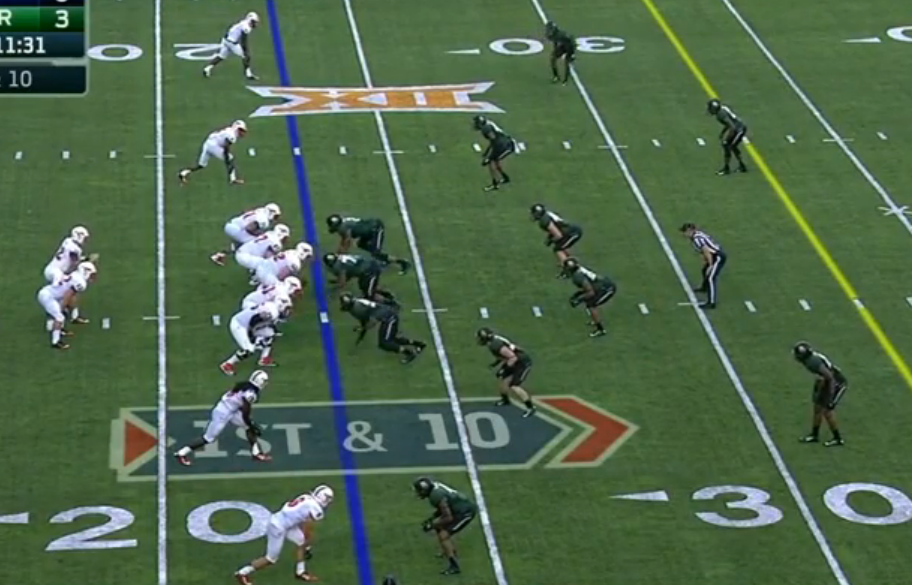 This is something completely different.  I'm calling it our "3-4 base" because of the plays where we used the 3-4 defense this past week, this was by far the most frequent alignment.  In this defense, every time SMU went 4-wide (which was a lot), we were able to stick Brence and Blanchard on the slot receivers with safety help over the top rather than bring a safety into the box or move Edwards or Hager into a potential mismatch.  An example:

Note the defensive ends lined up either head up or slightly inside the tackles.  That's important.  On a couple of passing downs where we didn't have to worry about SMU trying to run, we split the ends wide outside the tackles to get something more like this: 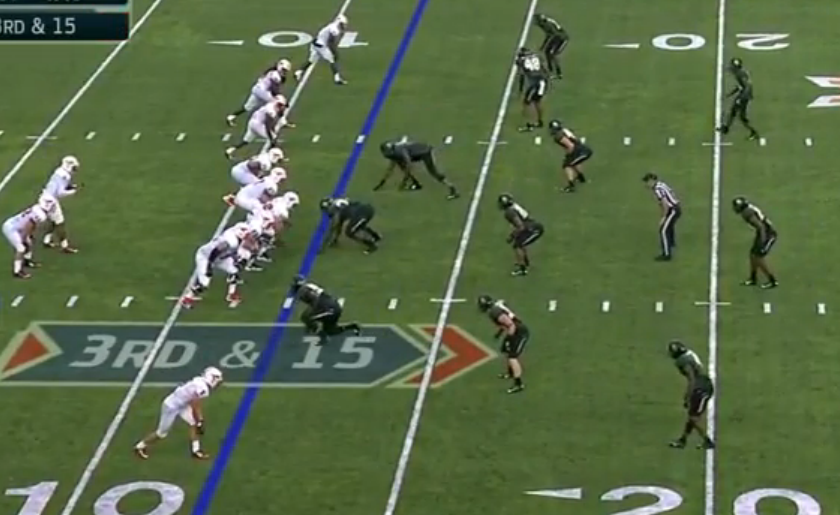 Everything else is basically the same, just this time, opposing tackles have to go a lot further to catch DEs much faster than they are.  The play above resulted in Oakman's first sack of the season because of that fact.

The key difference between the 3-4 defense, base or wide, and the 4-3 base is the substitution of one defensive lineman for another linebacker.  For us, that meant Blackshear left the game so Travon Blanchard could enter, giving Baylor a nickelback on each side of the field in addition to the two linebackers in Edwards and Hager (or, as we also saw, Taylor Young and Hager or Grant Campbell).  What does this do?  Ian continues:

With the new 3-4? No longer an issue. They can stick Collin Brence out there on the boundary edge and thus allow Orion Stewart to play over the top and the will linebacker to play in the box without yielding that space in the boundary flats. What's more, they actually add an athletic defender there to turn what was once a useful if somewhat limited space into a no-fly zone.
There are so many spread teams that love to attack the boundary side space that teams have to leave open to handle other stresses. Can't be done against this 3-4 look because there are basically three players there where before there was two.
Or you can blitz to get a four, five, or six man pressure that's no different than what you did in the 4-3 save that the blitzes are harder to spot.

That last part is very important; though Baylor often got pressure with just the down 3 linemen, we were also able to bring Blanchard or Brence off the edge or Young up the middle without losing anything we would have had in the 4-3 alignment.

So why doesn't everyone do this?  It's a good question, one Ian was kind enough to answer:

Because you are taking that player from somewhere else, namely the inside of your defense. You trade out a defensive tackle for an extra linebacker and are left trying to rush the passer with only three players and stop the run with a five-on-five match-up where the offense outweighs you in at least four spots.

The key to this working, according to Boyd? Our very own Shawn "I am Groot" Oakman.

At 6'8" and 280 pounds, he's pretty hard to run against. He plays with solid pad level, physically overwhelms people, and uses his long arms to restrict running lanes. Paired with Billings and Palmer that's a better run front than any three DL package Baylor has ever had before. Because Baylor has an extra linebacker on the edge they'll often have him play the B-gap in these looks also so he becomes a sort of defensive tackle hybrid.
He's also a dominant pass rusher who can allow the Bears to get pressure when they only send three players after the QB. Bennett also used his ability to get into space, win the edge, or come hard inside to use three-man zone blitzes in which one DL dropped and was replaced by a linebacker.

Personally, I'd include Billings in that, as well.  If he gets washed out by a double-team from the center and guard, it probably doesn't matter how good Oakman is, though the 3-4 base that puts him, as Boyd mentions, on the inside shoulder of the tackle helps significantly in that regard.  As long as those guys, plus Javonte Magee, Blackshear, Palmer, and K.J. Smith, all of whom played in this alignment at some point Sunday, can keep teams from running the ball effectively on this defense, we'll continue to see it used. Then, Boyd says, you not only have a defense better equipped to handle spread offenses but also could net Oakman some hardware as Big 12 Defensive Player of the Year.

What Did It Do to SMU?

Now that we know what it is and does, I wanted to provide a little support for why this is so exciting.

On Sunday night, SMU ran 65 non-punt offensive plays in 15 drives against Baylor's defense, totaling 67 yards.  I've already told you where that performance ranks in Baylor's defensive history.  When I had a little time, I charted out those offensive plays, what they were, which alignment Baylor used, and what happened as a result.  You can view the whole chart here.

As it turns out, Baylor threw a 3-4 defense at SMU on 30 of 65 offensive plays, a little under 50%.  On those plays, SMU gained a grand total of 18 yards of offense, or exactly .6 yards per play.  For comparison, that means on the 34 plays where they faced the 4-3, SMU gained 47 yards, or about 1.44 yards per play.  Both are outstanding numbers, obviously, but I don't have to tell you how incredible it is to hold a team to just over half a yard per play.  It looks even more ridiculous when you take out the 11-yard draw by SMU on 3rd and 10.  Do that and SMU gained a grand total of 7 yards of offense on the other 29 plays against Baylor's 3-4.

Other notes on the defense after having charted it out:

Headline aside, I'm trying really hard not to get myself too psyched up about the potential impact of this defense.  It's possible, after all, that what we saw Sunday night was simply the perfect storm of an athletic defense and a putrid SMU offense.  It's also possible that Bennett sees something I don't (probable even) and decides never to use this alignment again, killing my dream just as it began to come to fruition.  For now, though, the potential of a 3-4 defense with Oakman and Billings up front and our cadre of speedy linebackers behind is tremendously exciting, and I'm ready to see more.