We've got new odds for the Big 12 Chapmionship Race, courtesy of Bovada. I was able to get my hands on the odds from last year as a comparison. Take a look:

For the uninitiated, the odds represent the payout that one would receive if they bet on a particular team to win the Big 12. Favorites have an increased expectation to win, so there is a lower payout for those bets. Bettors are looking for teams where the sportbook has a different valuation of a team's chances than they do and will place money accordingly. More on that in a minute.

The reason that I find these numbers valuable is that betting odds offer an interesting outsider perspective on the college football landscape. Unlike the talking heads on TV, there's real money at stake here; that's a much different cost to pay for being wrong. However, the markets are not perfect. They usually tend to overrate the teams with the largest, most rabid fanbases. This is because they have more optimistic fans who are willing to bet accordingly.

I'm not much of a gambler, so it's hard for me to think of odds this way. Instead, I prefer to think about them as probabilities. I went ahead and did the conversion here. 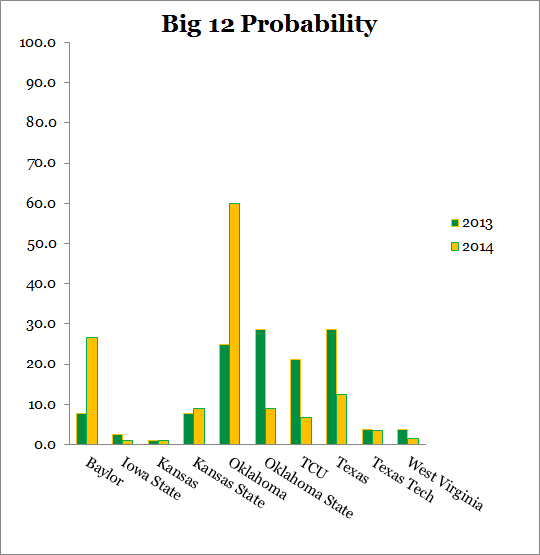 Unsurprisingly, Oklahoma is the leader here, as we've seen in various other preseason polls. They're considered to have a 60% chance of winning the Big 12 this year, followed by Baylor at 26.7%. Both of these represent big jumps from last year for both teams when OU and Baylor had 3rd and 5th best odds, respectively. The co-leaders from last year, Oklahoma State and Texas, take a step back. Texas still has the 3rd best rating with a 12.5% chance to win. This is likely at least partly due to what I was talking about previously regarding popular teams tending to get overrated a bit.

It's not just the rank that matters; the percentage has value, too. It helps give an idea of how close the teams are to each other. 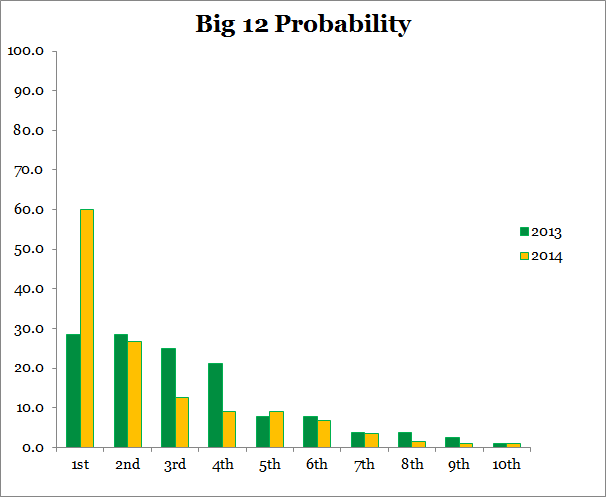 Last year (green), there were 4 teams that were all considered to have similar odds (21-28%) of winning the Big 12 - OSU, Texas, OU and TCU. This was followed by a second tier of teams, dark horses if you will, where Baylor and Kansas State resided (8%). This year, the expectation appears to be for OU and Baylor to be in the top 2 tiers by themselves, followed by a clump of 4 teams (7-12%) in Texas, OSU, Kansas State, and TCU.

Personally, there are two teams that seem a bit off to me. One is Texas, which seems a little high to me in light of their recent dismissals, potential future dismissals, and the walking injury concern that is QB David Ash. The other is Kansas State, who I think should be closer to Baylor than to the next tier.

What about you? Pick your overrated and underrated teams in the comments.