Three weeks after dropping out of the BCS Top 5 following a blowout loss in Stillwater, the Bears find themselves on the cusp once again in the final BCS standings ever. 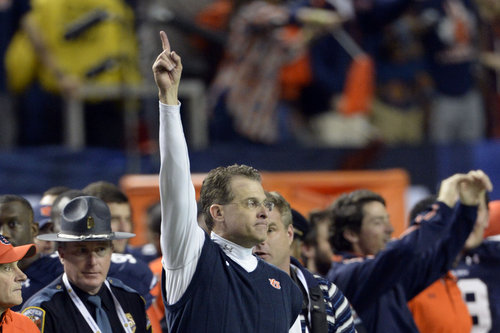 The Tigers will square off with the Seminoles in the BCS National Championship Game. We'll update with the polls as they're released throughout the day.

As it turns out, a weekend that we thought amazing with a Baylor men's basketball win over Kentucky in Arlington and the sequence of events Saturday that saw Baylor football win its first Big 12 Championship, and the accompanying Fiesta Bowl berth, outright was actually even better than that.  Though at this point in the season the BCS doesn't really matter to anybody who finds themselves outside the top 2, the losses of Ohio State and Oklahoma State coupled with Baylor's big win, elevated the Bears back to the cusp of the top 5 in the country.  Because one team above us is guaranteed to lose and another, at least, is likely, we now have a legitimate chance (assuming we win) to finish the 2013-2014 season ranked in the top 5. Doing so would be huge for Baylor's ongoing efforts in recruiting, fundraising, and just about everything else.

With Texas' loss and Oklahoma's big win in Bedlam, the Big 12 has 3 teams ranked in the latest BCS, all of which are in the top 15.  Baylor is obviously first at #6, followed by Oklahoma, now eligible for a BCS bowl at #11, and Oklahoma State, who fell from #6 all the way to #13 on their second loss of the season.

Is it possible to bribe a computer?  How has the SEC not figured that out already?  Can you believe this is the final BCS ranking ever?

Baylor moves up to 6th in BCS Standings. Next up, Fiesta Bowl. #Big12champs