Week 2 of the 2013 BCS has arrived, and the Baylor Bears jumped all the way to #6 in the country in the rankings announced tonight on ESPN, behind only Alabama, Oregon, Florida State, Ohio State, and Stanford.

Share All sharing options for: Baylor Rises to #6 in 2013 BCS Rankings

With the Missouri Tigers falling from the ranks of the unbeaten this weekend and the Miami Hurricanes less than impressing, your Baylor Bears managed to jump two spots in the second week of the 2013 Bowl Championship Series rankings. Five teams remain above the Bears, who now occupy the #6 spot I predicted for them last week. This is the highest ranking in program history, breaking the mark set just a week ago, and we're not done yet. Baylor is off this coming week and will return to action next Thursday, November 7, against the 10th-ranked Oklahoma Sooners, fresh off their home victory this weekend against the Texas Tech Red Raiders. 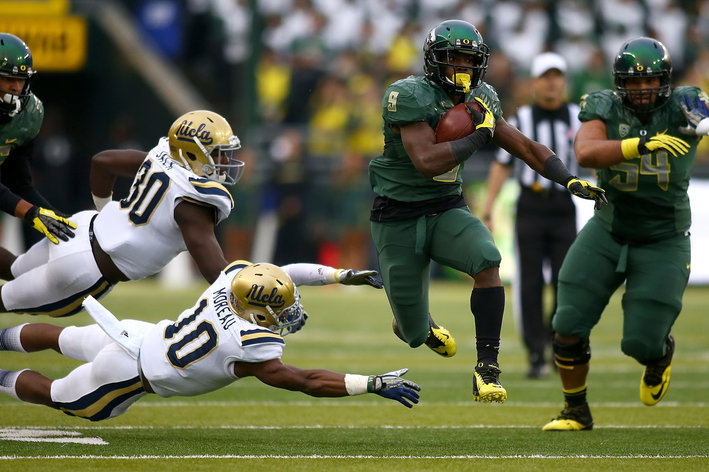 The second edition of official BCS rankings have the Noles just outside of the national championship picture with six weeks still go to.

Unfortunately, Missouri losing is only a surprise in when it happened, not that it happened. I think most assumed they would lose eventually to Alabama, removing themselves from our path. If they didn't, they'd have to beat the Crimson Tide to avoid that fate, removing a different team (potentially) from the equation. Either way, we were going to pass one of those two teams. Still, they are likely to meet up with the Tide down the road in the SEC Championship Game, raising the possibility that both teams could end up with a loss (should Mizzou win that game). That could help.

Even at #6 now, we're still going to need help if we have aspirations for the national championship. With Stanford playing Oregon the same night we take on OU, another team will have to fall. That's good. We're also likely, as our strength of schedule improves, to pass B1G's Ohio State Buckeyes, placing us in fourth should we continue winning as we have. That means we'll need 2 of the top 3: Alabama, Oregon, or Florida State, to lose to have any chance at playing for the Crystal Football (in addition to, obviously, winning out ourselves). Here are the schedules for every team above us in the rankings released tonight:

In all honesty, Baylor might have the most remaining landmines, or "outs', of any of the teams above. With UCLA down, Oregon faces Stanford next Thursday, and that's about it until the Pac12 Championship. Substitute the SEC Championship and you have the same thing with Alabama and LSU, though Auburn is a potentially tricky matchup in the Iron Bowl. FSU meets Miami this coming week, then Florida in the last week of the season before the ACC meets to decide its winner. If Ohio State doesn't win out, I'll laugh and laugh and laugh.

Your Baylor Bears face Oklahoma next Thursday, then have three of the next four teams against programs that should be ranked when we play them. The last game of the season will be at home against the Texas Longhorns, the same team we all once left for dead after BYU and Ole Miss ripped them to shreds and that is now undefeated in Big 12 play. They're not ranked yet, but I think they will be.

So there you have it. Let us rejoice in the rise of our team to the precipice of the elite. The Baylor Bears are the #6 team in the country!