Baylor Rises to #5 in Coaches, Harris Polls, #6 in AP before BCS Debut

The 2013 Baylor Bears continue to chart new territory for the program with the highest ranking of any Baylor team in the last 20 years.

Share All sharing options for: Baylor Rises to #5 in Coaches, Harris Polls, #6 in AP before BCS Debut

First, the AP Poll.  A reminder: this poll is not considered in any way by the BCS rankings, which will debut tonight.

The Coaches Poll: This one is considered along with the Harris Poll, which we don't have yet.  Each poll constitutes 1/3 of the BCS ranking, with the remaining third being decided by the computers.  I'll update the thread once I get the HTML for this.  For now, what we have is somewhat primitive.

I tried finding every BCS Projection I could for the Morning After post today.  I'll repost them here.

SB Nation -- Has Baylor at #7 behind Alabama, Oregon, FSU, Ohio State, Missouri, and Stanford.
BCSGuru -- Baylor at #6 behind all of the above except Stanford.
Brad Edwards (ESPN) -- The same.

The official BCS show starts tonight at 7:30 on ESPN.

UPDATE: The Harris Poll, the second of the two polls feeding the BCS rankings, is out.  Baylor sits at #5, essentially ensuring a #6 ranking in the BCS, at worst.  If the computers like our defensive improvement ... who knows. 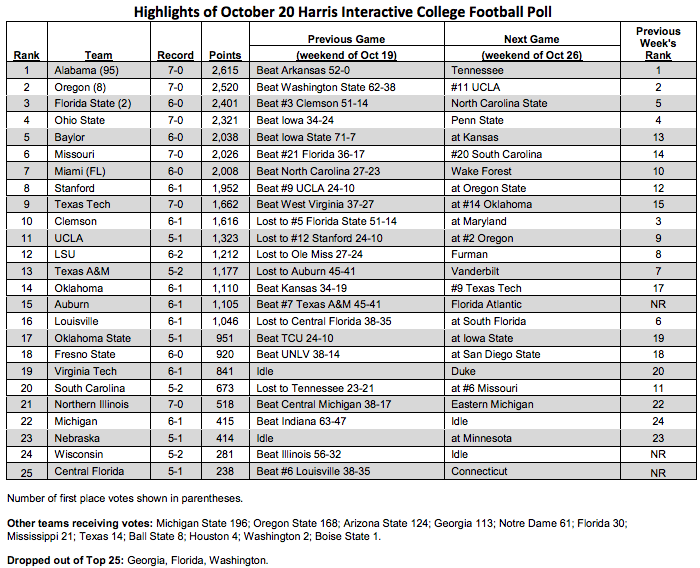