With a little over an hour left before the Tournament starts for real but more than a day until our Baylor Bears play Nebraska, it's time to share our brackets and predict Baylor's eventual ouster (if any!).

First of all, I've been very impressed with the response to our ODB Bracket Challenge. As of right now, we have over 190 members in the Yahoo! pool, and that's huge. A lot of those are the same people filling out multiple brackets (you were allowed up to 3), but still. It's our best response yet to a Yahoo! fantasy game, and I'm excited.

Now that we're so close, I thought I'd share what I consider my best bracket, the one I'm most confident will end up being even somewhat right. If you'd like to do the same or just tell us how you think things will go down, please do so in the comments. Also, vote in the poll below on where you think Baylor will eventually lose (if at all) in this year's NCAA Tournament. Don't let my prediction sway your votes, and please vote honestly about how you think we'll do. If you legitimately believe Baylor will take home the trophy, choose that option and then tell us who you think we'll beat in the comments. It's all in fun.

If you need a reminder on what the bracket looks like this year, SB Nation has a beautiful one that will update as we go through games. It's on our front page here. For a printable bracket, click here. 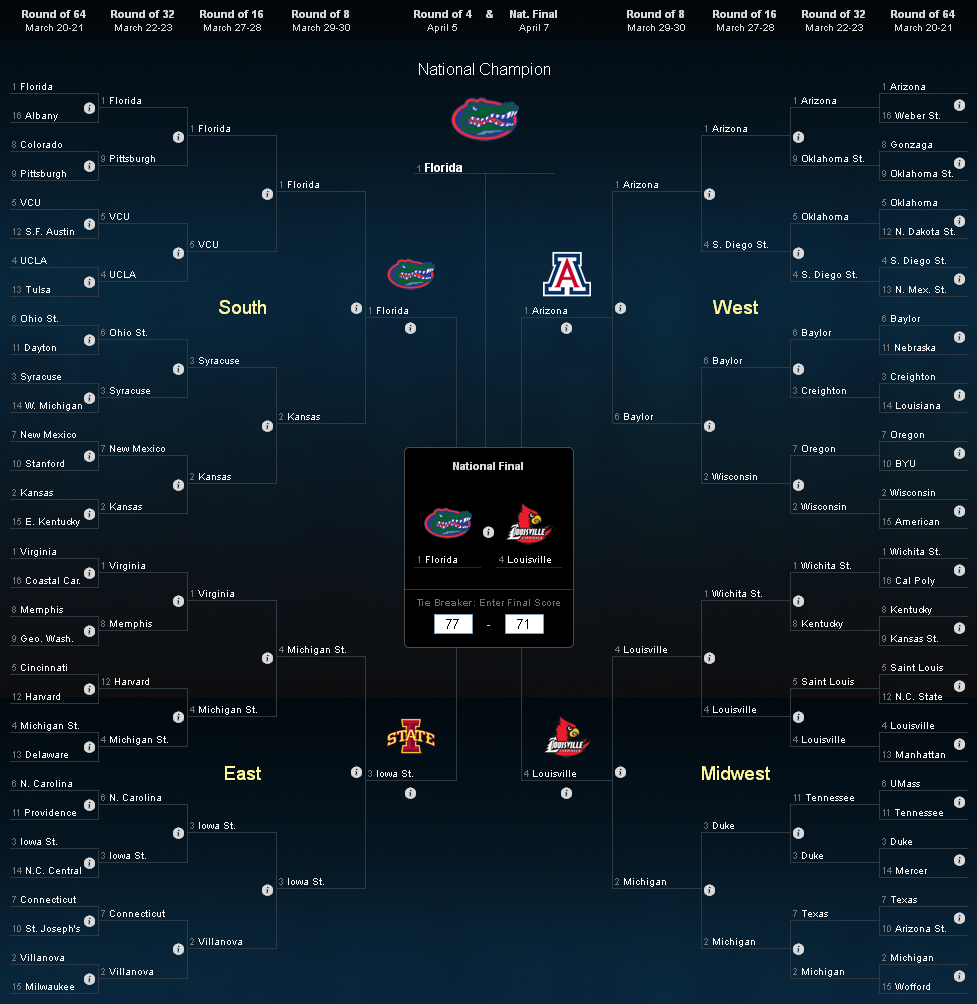 It's a big image, but you should be able to scroll. I have the Florida Gators defeating the Louisville Cardinals in this year's National Championship game. Florida beats the Iowa State Cyclones and Louisville the Arizona Wildcats to get there in the Final Four. I have Baylor going out in the Elite Eight to Arizona because of their combination of offense and defense. Aaron Gordon and Nick Johnson will just be too much, but we keep our even year streak of getting to the Elite Eight intact. That's after we beat Nebraska, Creighton, and Wisconsin. I actually feel better about the Wisconsin game than I do Creighton for a number of reasons.

Like I said, share your brackets in the comments if you want to or just your thoughts on how things might go. If you want to use mine as a last-minute substitute in a bracket competition, that's fine, but know that I suck at this. You've been warned. Vote in the poll!