With the news that Kansas star and possible #1 overall pick Joel Embiid will miss the Big 12 Tournament this week, we may end up having one of the most wide-open Tournaments in recent memory. I say "may" because it's also possible Kansas just wins the dang thing, anyway. Below I've imported the full official bracket for the Tournament with dates, TV listings, and times for each game. 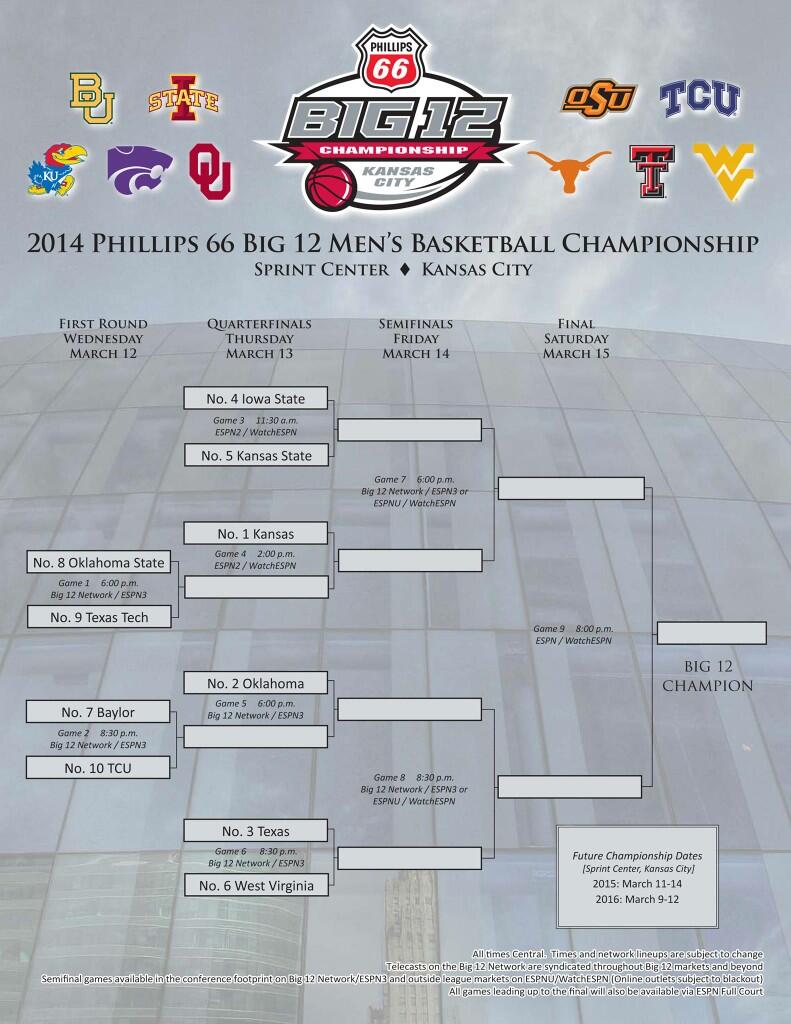 The first two games between the Tournament's lowest four seeds take place tonight, setting up for the real meat of the Tournament tomorrow with 4 quarterfinal games. As of yesterday, the last time I received updated odds from Bovada, their official odds for each team to win the Championship is as follows. I believe it includes the updated news about Embiid. (Links in the team names go to each's SB Nation blog).

There's a lot of things going on here that are pretty interesting to follow. First, the #8 seed in the Tournament has the same odds to win it as #2 and #4, and owns a fairly significant gap over #3. That #8 is Oklahoma State, who the oddsmakers clearly believe is better than its seed suggests. They feel the same way, albeit less strongly, about #7 Baylor, who also owns better odds than #3 Texas. It's also interesting that the teams with the best 3 odds all come from the top half of the bracket. The most plausible explanation for Texas' relatively low odds is that the oddsmakers like the winner of the potential Oklahoma/Baylor game over that of Texas/West Virginia.

I'm going to break some new ground for ODB here by trying to project out the entirety of the bracket. To do so, I'll use Kenpom's rankings as well as my own judgments. At the end, I'll post my bracket. (Where available, I've linked StatSheet's game previews. Where unavailable, each team's profile page is linked instead.)

Texas Tech, the second-lowest seed in the Big 12 Tourney and a 250/1 chance to win it, is #79 in KenPom's rankings. That's the strength and depth of the Big 12 Conference this year. OSU should win this game handily and is a 9.5-point favorite to do so. Result: OSU wins.

Baylor; a devastatingly efficient offensive machine with obvious defensive limitations. It's pre-2013 football all over again ... until you get to the tempo. Baylor has become ridiculously good in the half-court set due primarily to offensive rebounding and the emergence of one Kenny Chery. TCU is just bad everywhere. Result: Baylor wins.

Had to go to VegasInsider for the odds for this and all the other games played Thursday and beyond. I like Iowa State in this game as the more well-rounded of the two teams. They're a 2.5-point favorite on a neutral court, so the oddsmakers apparently agree. ISU has the two best players in this game in Melvin Ejim and DeAndre Kane. Result: ISU wins.

My first temptation at an upset comes in the first projected game (since OSU has to beat Tech to get here). I've been going back and forth on who wins this game with KU playing sans-Ebiid. In their last game in a similar fashion, the Jayhawks fell to WVU despite 41 points from Andrew Wiggins. That was against a team still motivated to make a statement of Tournament worthiness, as is this one. Still, I'm going to predict that Kansas and Bill Self make the adjustments necessary to beat OSU and Travis Ford / Marcus Smart. Screw it, no I'm not. Phil Forte is going to rain buckets. Result: OSU wins.

I like West Virginia as a team still fighting for its NCAA Tournament life where Texas just cares about seeding, but I'm still taking Texas in this game, unless it comes out that Bieber took the whole team on a plane ride. No matter the outcome, Barnes will complain about something trivial that happens. Result: Texas wins.

This whole time, I've been planning on taking Iowa State to win this game, regardless of opponent, and I'm not changing now. Give me the Cyclones to advance to the Championship Game on the strength of that Kane/Ejim combo. OSU makes the NCAA Tournament by beating Kansas in the previous game, but I trust Fred Hoiberg about a million times more than Travis Ford. Result: ISU wins.

Scott Drew is going to cross Rick Barnes' line in this game and Baylor wins to advance to the Championship. Cameron Ridley won't get away with murder inside against Cory Jefferson and Isaiah Austin on a neutral court, and Baylor runs their winning streak to 5 games. I will relish this victory like few before it. Result: Baylor wins.

Am I going to do it? Am I going to predict Baylor's first Big 12 Tournament Championship in the same year the Bears were once 2-8 and dead in the water? No. The two teams here split their games in the regular season, with each team winning by double digits at home. Not much to draw from there. In the end, I like ISU's top two players over ours, and I'm going to predict an ISU win on the neutral floor in Kansas City. The entire population of Ames will travel for this game. Result: ISU wins.

After all of that, we have the following bracket: 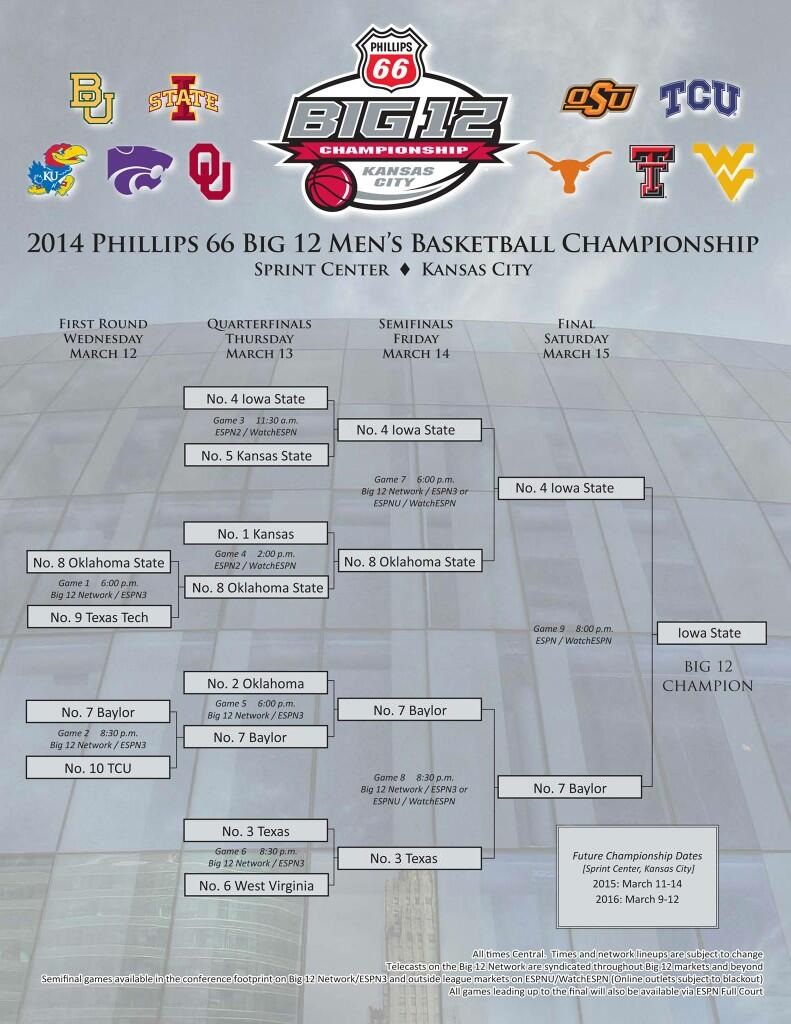 Baylor finishes the Tournament having won three games and running their record to 24-11. What do you think?

Big 12 Tournament 2014: Baylor in the Championship Game vs. Iowa State