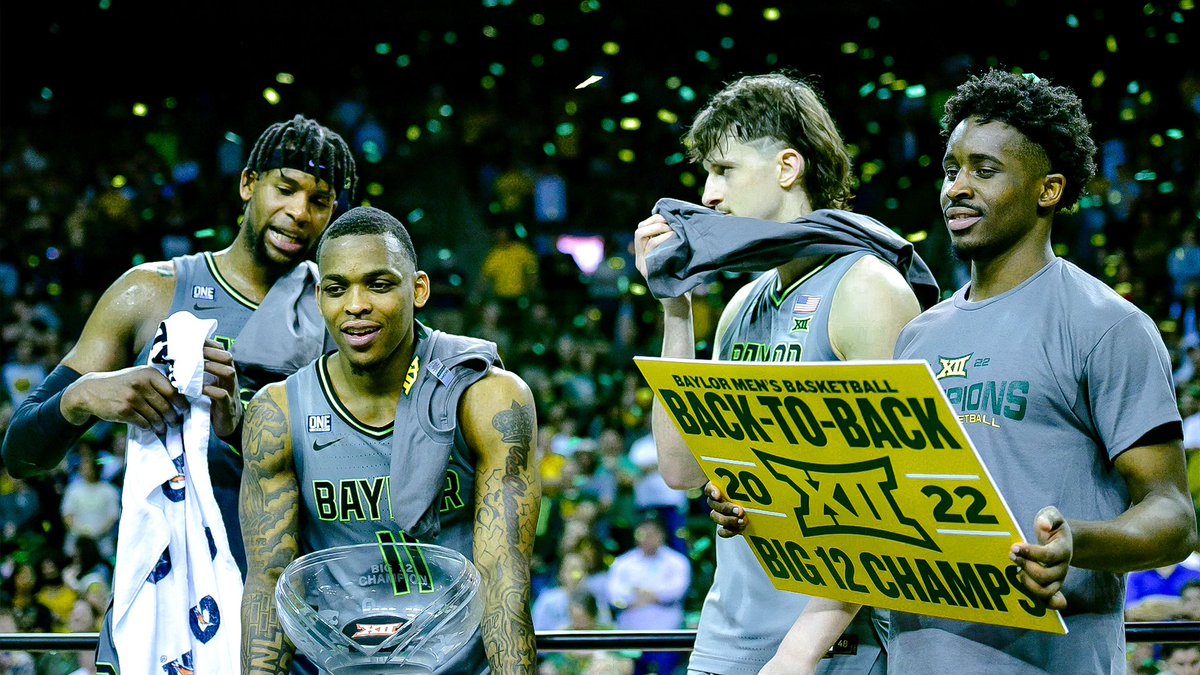 The Big XII's Individual Awards were announced yesterday. For the most part, I feel like the winners and honorees were deserving. There were some headscratchers and I'll discuss those in this post. For those of you who have been following along, I have been posting Big XII Award Leaderboards (and Power Rankings) for the last 12 weeks on here. If you would like to view the most recent such post, it can be found here. Thank you to those who have endured my ramblings about these teams and players this season. I will be doing at least one more power ranking (hopefully to be posted on either Tuesday or Wednesday of this week).

The Bears' lone representative in the All-Big XII First Team is James Akinjo. Ochai Agbaji (Kansas), Nijel Pack (KSU), Izaiah Brockington (ISU), and Bryson Williams (TTU) rounded out that squad. It's hard to argue that the First Team should have looked any different. James was remarkable, willing the Bears to many of their 26 wins this season, flashing great versatility. He made an impact as a scorer and a facilitator as well as defending at an elite level. 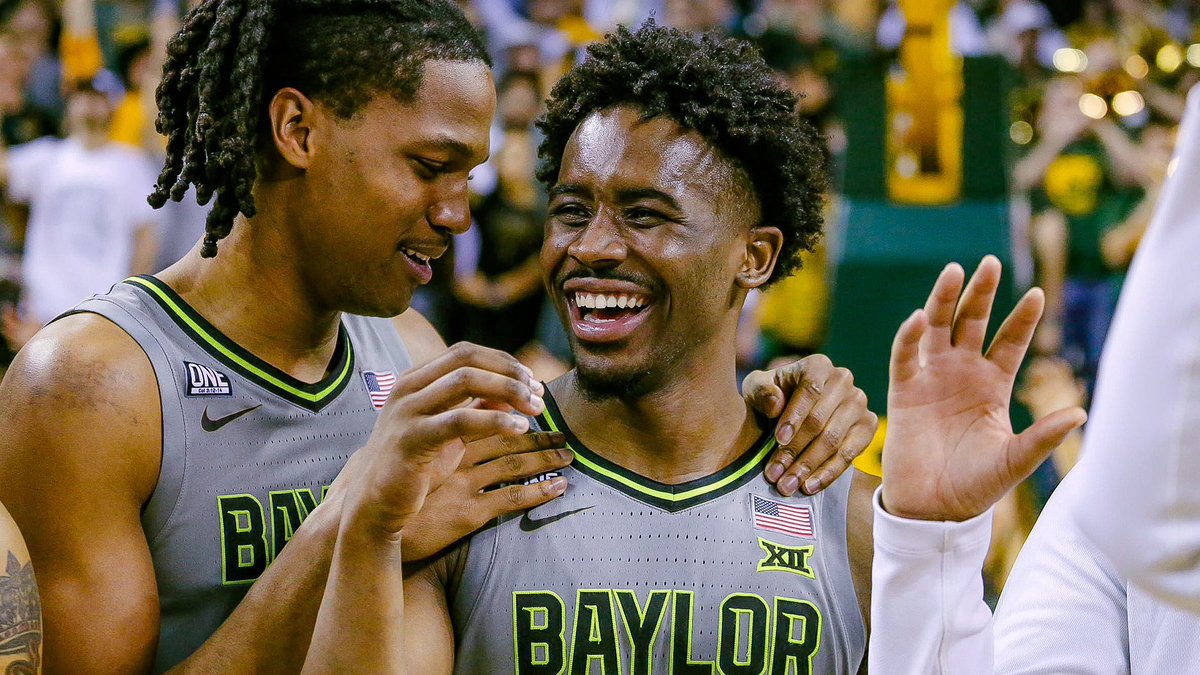 Adam Flagler is the only Baylor player on this unit. The other 4 members of this group were Christian Braun (KU), Mike Miles, Jr. (TCU), Timmy Allen (Texas), and Taz Sherman (WVU). I am not a big fan of this group because 4 of the 5 players are guards. I prefer at least 2 legitimate guards and 2 legitimate forwards in each grouping. Adam was excellent for Baylor this year. Over his last 16 games, he averaged 16.2 PPG on 47% from the field and 45% from deep (nearly 7 3PFGAs per game).

Baylor's Matthew Mayer and Jeremy Sochan were given this distinction along with 16 other players on the different teams around the league. I'm not at all sure why Co-Defensive Player of the Year Jonathan Tchamwa Tchatchoua wasn't listed here. I think Flo Thamba and Kendall Brown (and maybe LJ Cryer) were also well deserving of making this group.

Akinjo was also named to the Big XII All-Newcomer Team. The other members of that group include Izaiah Brockington (ISU), Mark Smith (KSU), Timmy Allen (Texas), and Bryson Williams (TTU). Again, I tend to agree with the entirety of this list.

The Big XII All-Freshman Team featured both Jeremy Sochan and Kendall Brown. The other 3 members of this team include KJ Adams, Jr. (KU), Tyrese Hunter (ISU), and CJ Noland (Oklahoma). I have no major objections to this list.

I also think James Akinjo has a very strong argument that he belonged on the All-Defensive Team. He is the League Leader in steals and is 4th in the League in Defensive Box +/-.

Big XII Coach of the Year 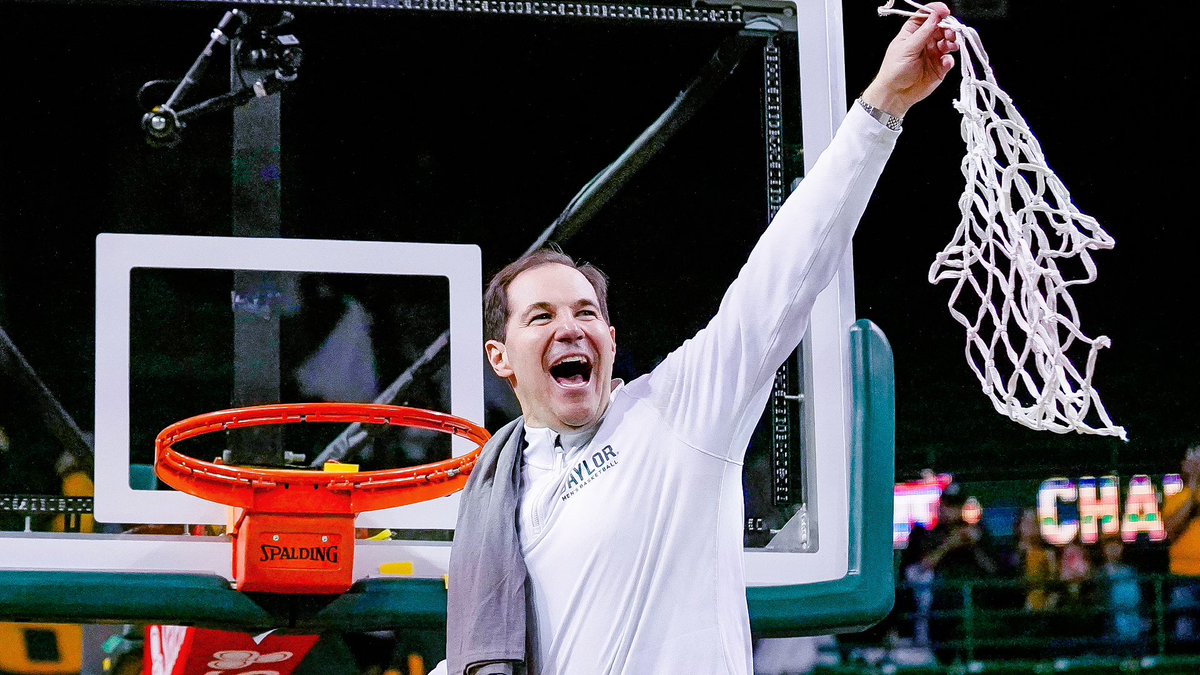 Scott Drew absolutely deserved to win this award. Mark Adams and TJ Otzelberger had amazing seasons in their first campaigns as the leaders of their respective programs. Scott Drew lost 4 starters off of his previous year's team. He lost a star recruit, Langston Love and a B12 DPOY and the team's leading rebounder, Jonathan Tchamwa-Tchatchoua. He also has dealt with James Akinjo, Adam Flagler, LJ Cryer, and Jeremy Sochan missing time with injury. Despite all this adversity, Scott Drew has coached his team to a conference championship in the toughest conference in America. Drew's award is not a slight against Mark or TJ but instead a compliment to one of the best (and most likeable) coaches in America. Mark Adams will surely have a successful career and win a lot of games if this season is any indication (it almost certainly is), but Drew earned this title. It's the 3rd consecutive season where he has been awarded the honor. This Award is voted on by the coaches of the league so all the Tech fans crying about it can go pound sand.

Big XII Player of the Year

Ochai Agbaji, Guard, Kansas. There was little doubt as to who would win this award. I maintain that if James Akinjo hadn't gotten injured, he may have challenged Ochai, but there is no argument that Mr. Agbaji doesn't deserve this honor.

Big XII Newcomer of the Year

Izaiah Brockington, Guard/Forward, Iowa State. This dude stuffed the stat sheet almost every night and helped put the Cyclones in position to make the tournament just a season removed from a disastrous two-win campaign. Like the POY race, if James Akinjo hadn't been affected by injury, he may have challenged for this award as well. 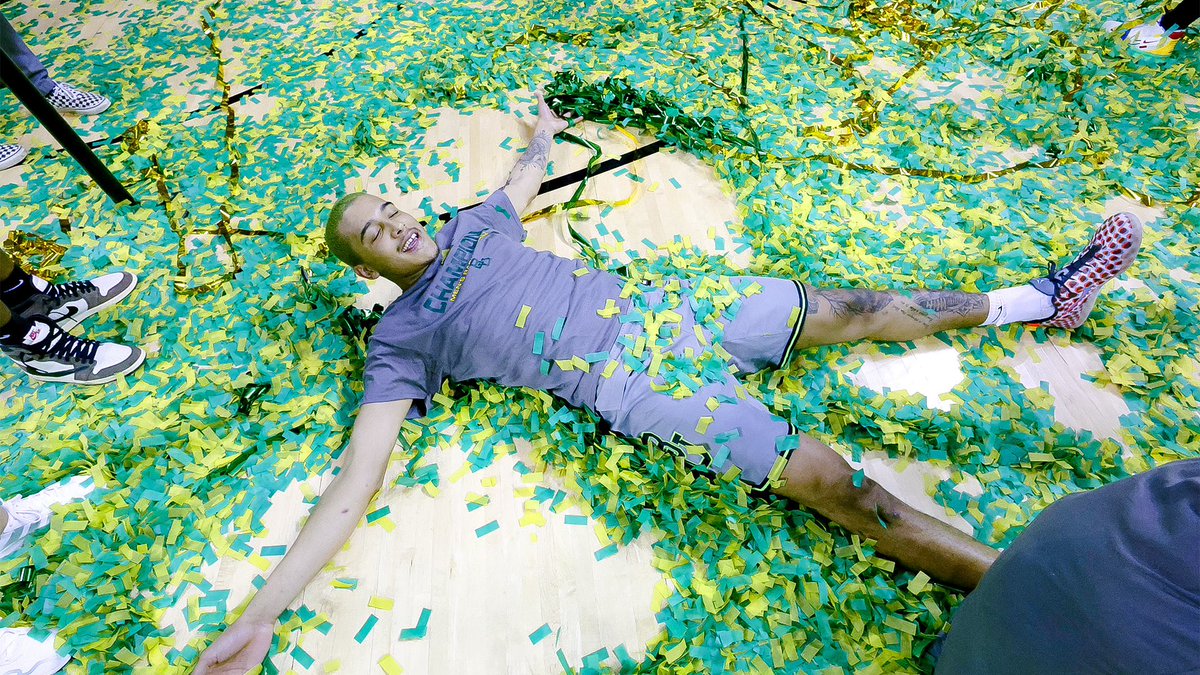 Baylor's very own Jeremy Sochan. Well earned due to Jeremy starting just 1 of 27 games played and averaging 14.1 points, 9.9 rebounds, 2.7 assists, 2.1 steals, and 1.1 blocks per 40 minutes on 48% from the field. LJ Cryer likely would have won this award if he had been able to stay healthy.

Big XII Freshman of the Year

Tyrese Hunter, Guard, Iowa State. In fairness to Hunter, he was remarkable this season on both ends of the floor, leading the Cyclones in both assists and steals as well as being the team's 2nd leading scorer. Still, Baylor's Kendall Brown was arguably the more efficient and impactful player. 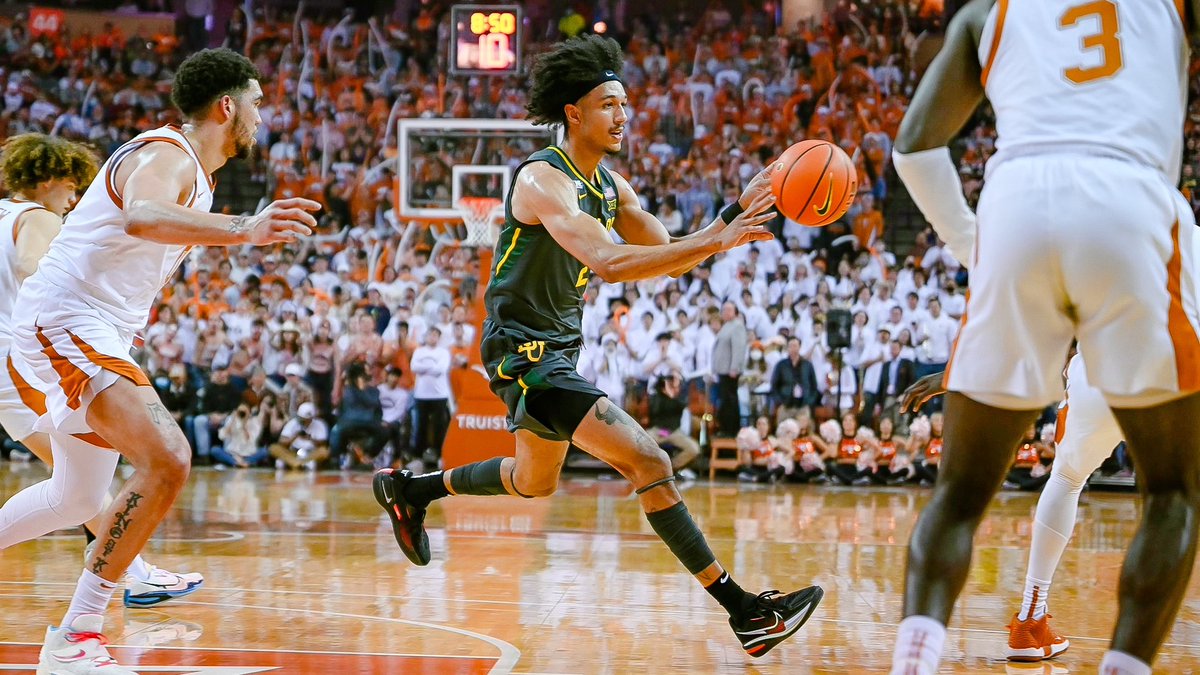 Jonathan Tchamwa Tchatchoua was named Co-Defensive Player of the Year. He shares the award with Moussa Cisse (OSU) and Gabe Osabuohien (WVU). Everyday Jon was fantastic on defense this year, showing the ability to both protect the rim and defend on the perimeter. He is a rarity who can switch 1-5 and brings so much effort and intensity on every play. 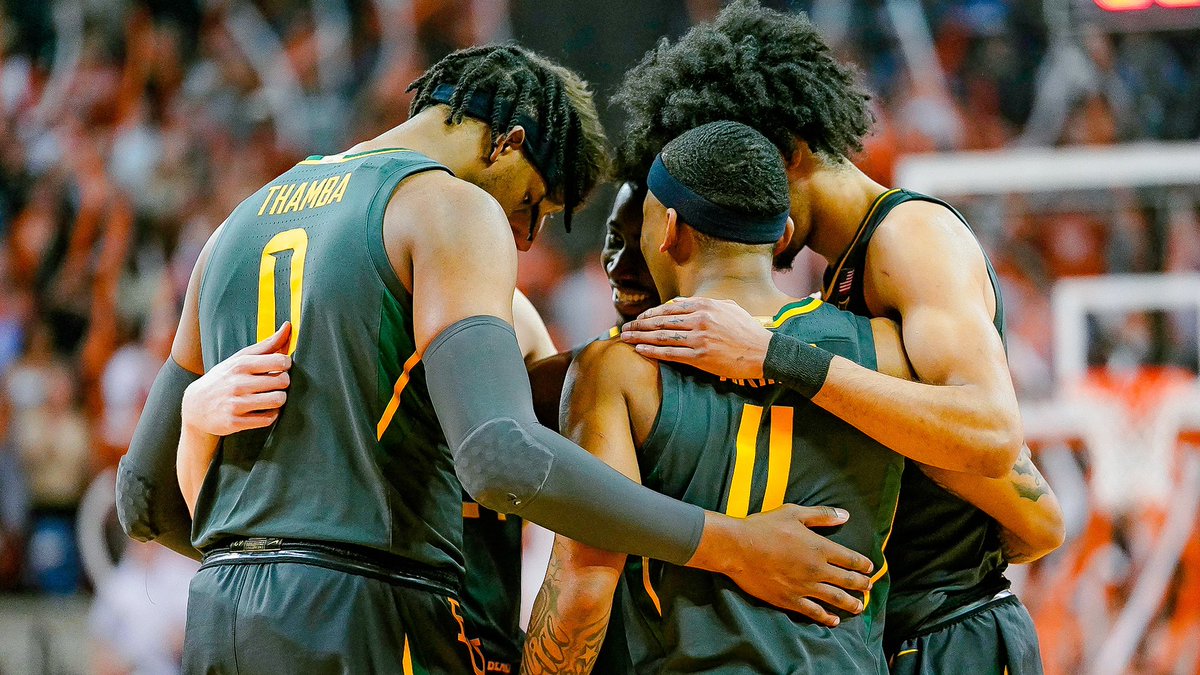 To all of these Baylor Bears recognized by the conference and also to the rest whose contributions flew under the radar, thank you for your effort, toughness, and character. This has been a deeply enjoyable season for at least this fan (and I'm sure many others). The work isn't done though, now it's time to go kick some butt in Kansas City and in the Big Dance!