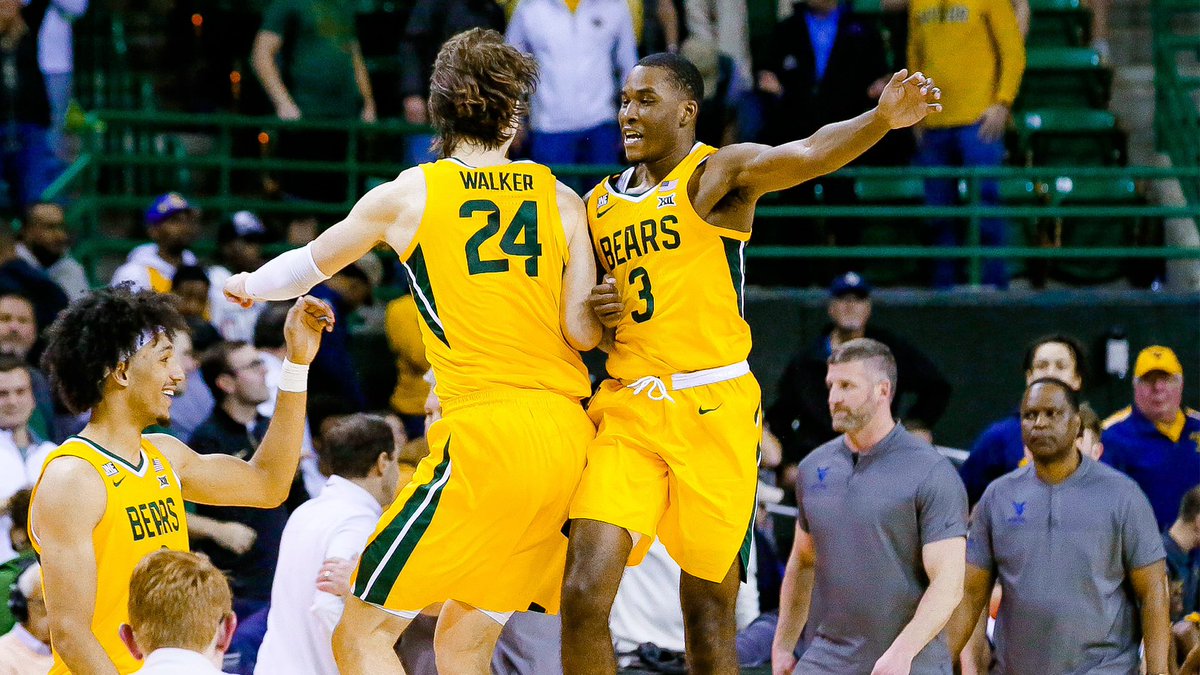 It was not a great weekend. It's been a few weeks since we've had a good weekend. We haven't been fully healthy in a month. Personally, I have a ton of (mostly good) things going on in my life such that I will not have much time to spend on these things going forward. Before the end of the month, I will be getting married and closing on a house *knocks on wood*. Those stressors added to the normal craziness of life means that this post and the next 2 or 3 will likely be much shorter and less detailed. Sorry. Hopefully, I'll have more time in March to spend writing about the Bears. If you'd like to check out last week's post, you can find it here.

Big XII Team of the Week: Kansas. After getting embarrassed at home by Kentucky the week before, the Jayhawks got 2 great wins.

Game Notes: WIN. KU 70 @ ISU 61. Without Ochai Agbaji and Remy Martin, the Jayhawks went into Hilton Coliseum and got one of their most impressive wins of the season. Despite 22 turnovers, KU led wire-to-wire. They won the battle of the boards and were significantly more efficient on offense. It was KU's best defensive performance since mid-January. Drake transfer, Joseph Yesufu, saw a massive increase in his role in the absence of Martin and Agbaji. Yesufu had mostly been out of the rotation this year for Kansas despite his heroics in Drake's NCAA tournament run last year where he averaged 23.5 PPG in those 2 games. He controlled the pace for the Jayhawks in this one and played well on both ends.

Outlook: The Jayhawks will play Texas and Oklahoma this week. They are firmly on top of the conference and have a small cushion. This team must now be the heavy favorite for the regular season conference title. I don't trust this team to make a Final Four run though, due to their inconsistency on defense.

Game Notes: WIN. BU 81 v WVU 77. The Bears haven't been fully healthy since early January. This time they were without LJ Cryer and Adam Flagler. That duo accounts for 26.6 PPG (more than 33% of the team's average scoring production). Baylor blew an early 10-point lead (hardly a rarity for this team recently). The FT shooting was beyond ugly. The Bears started the game 0/7 from the FT line. BU was also ice cold from deep early on, shooting 2/13 (15%) from deep in the 1st half. The Bears trailed by as much as 10 in the 2nd half. The got back into the game largely behind the efforts of James Akinjo. He had 25 points and 4 assists on 41% from the field and 4/7 (57%) from deep. Having this form of Akinjo back (following his lingering tailbone injury) is massive for Baylor. Still, it was the clutch heroics of Matthew Mayer (who had no points in the first 35 minutes of the game) who had 9 points in the final 5 minutes to lift Baylor over the ‘Neers. I will address the Taz Sherman injury in WVU's section of this post. Spoiler: Most Mountaineers fans overreacted to it.

Game Notes: LOSS. BU 59 @ KU 83. A rare sight, Baylor was beaten on the glass. Kansas consistently beat Baylor down the floor in transition, even off of KU defensive rebounds. Baylor was again without LJ Cryer. The guard trio of Adam Flagler (fresh off a knee injury), James Akinjo (possibly still feeling the effects of his tailbone injury), and Dale Bonner failed to score in the 1st half. Akinjo was particularly bad, managing 0 points on 0/11 from the field in 24 minutes. Kendall Brown played fairly well with 16 points and 4 steals. Scott Drew was called for a technical foul after screaming at the officials for a missed foul call. "Fun" Fact: This was Drew's first tech since 2016 (in a game against Kansas). This snapped a 9-game winning streak against AP Top 10 teams.

Outlook: Baylor will play Kansas State and Texas this week. DO. NOT. PANIC. It is extremely difficult to beat Kansas in Lawrence. We aren't healthy and haven't been in a very long time. We no longer control our destiny for the regular season conference title. Still, finishing in the top 3 of the conference is an important goal as it could set us up for a great run in Kansas City. Winning the conference tournament would be huge. It would set us up well to make another deep NCAA tournament run. The goal has to be getting healthy and establishing rhythm over the remaining 5 weeks before Selection Sunday. This is still a great team and one of which we should all be proud.

Game Notes: WIN. TTU 77 v UT 64. ELECTRIC. The atmosphere was phenomenal and as good as I've ever seen it in Lubbock, Texas. The Red Raiders took an early lead and never gave it up. Tech won the battle of the boards and got to the FT line early and often. The Red Raiders were led by a trio consisting of Kevin Obanor, Kevin McCullar, and Bryson Williams. That group had a combined 52 points, 15 rebounds, 2 steals, and 2 blocks on 57% from the field. McCullar almost single-handedly outperformed Texas from the FT line. He was 12/15 from the charity stripe while Texas was 14/19 as a team.

Outlook: The Red Raiders will face OU and TCU this week. This team has won 3 straight and 5 of their last 6. Tech has a great chance to keep their momentum going this week.

Game Notes: LOSS. UT 64 @ TTU 77. Marcus Carr was saddled with early foul trouble although he did end up leading the team with 18 points. The Longhorns were awarded 0 FT attempts in the 1st half. The Longhorns struggled to get the ball inside against the length and physicality of TTU's defense. They also struggled with their efficiency from the perimeter, going 6/23 (26%) from deep. Timmy Allen and Andrew Jones had particularly tough nights, combining for 9 points on 23% from the field. That duo normally averages 21.3 PPG on over 45% from the field.

Outlook: The Longhorns will take on Kansas and Baylor this week. They have won 4 of their last 5. Put up or shut up week for the Horns.

Game Notes: WIN. TCU 72 @ UT 63. Fun Fact: Prior to this game, TCU was 0-14 all time in Norman, Oklahoma. Star guard, Mike Miles, missed some big FTs late that gave the Sooners some glimmer of hope. Damion Baugh played well with 20 points and 8 rebounds on 46% from the field. Eddie Lampkin had a career high night with 14 points and 10 boards on a perfect 7/7 from the field. The Horned Frogs obliterated OU on the glass.

Outlook: The Frogs take on Oklahoma State and Texas Tech this week. TCU has not lost back-to-back games this season. If they can continue to bounce-back following losses, they should be a lock to make the Big Dance.

Outlook: The Cyclones play West Virginia and Kansas State this week. They have lost back-to-back games for the 3rd time since the start of Big XII play. ISU needs a good week to stabilize their tournament hopes. 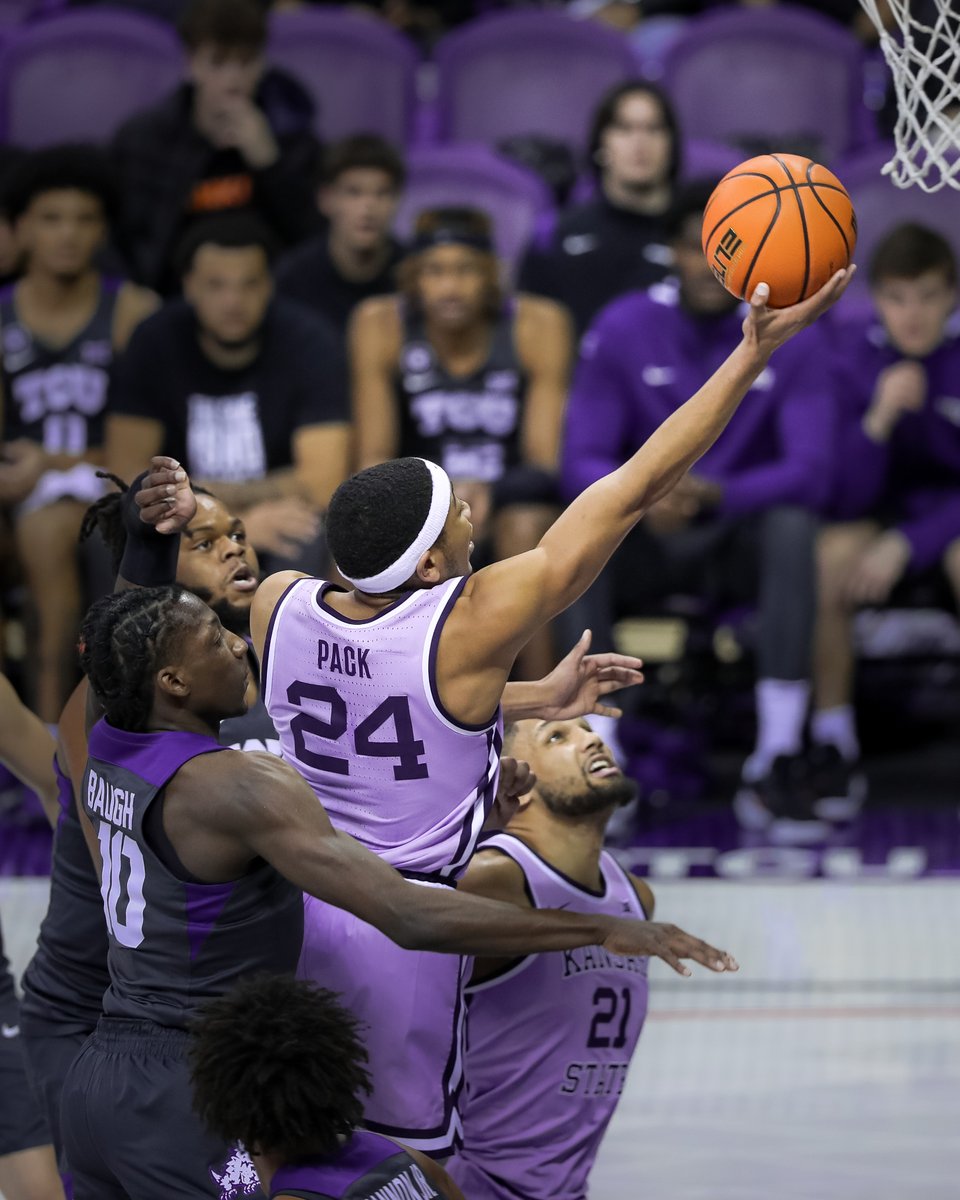 Outlook: The Wildcats face Baylor and Iowa State this week. Having climbed out of the conference cellar, KSU will look to solidify their resume this week.

Outlook: The Pokes will play TCU and West Virginia this week. They snapped their 4-game losing streak and won Bedlam. They'll look to continue to play spoiler.

Game Notes: LOSS. OU 63 v TCU 72. The Sooners trailed much of the 1st half although it was tightly contested. Reserve big man, Ethan Chargois, looked great early but was quiet in the 2nd half. OU got to within 7 multiple times late in the 2nd half but couldn't finish closing the gap. The storylines that decided the game against the Sooners were rebounding and shot selection. The Sooners were absolutely obliterated on the glass (they were outrebounded 42-20). They also took way too many three-pointers which has been a problem lately. Points per possession when shooting two-pointers: 1.14. Points per possession when shooting three-pointers: 0.69. With that sort of disparity, there is absolutely no justification for more than 48% of your FGAs to be three-pointers. Jordan Goldwire helped keep the Sooners in it with 9 2nd half points and some solid defense. Right now, this team doesn't have a clear leader between Goldwire, Gibsion, and Groves. This isn't because they're all so good but instead because they are all so inconsistent.

Outlook: Oklahoma will face Texas Tech and Kansas this week. The Sooners have lost 3 straight and 7 of their last 8. KenPom also projects that they'll lose their next 5. OU appears headed for the bubble.

Game Notes: LOSS. WVU 77 @ BU 81. The losing streak continues. Let's address the big issue, the Taz Sherman injury. First off, I hope that Sherman is okay (UPDATE: he is still listed as day-to-day as of the time this is posted). He is a great player who has been on my player of the year leaderboard since the inception of these posts. He had a career-high 29 points against the Bears before leaving the game with an apparent head injury with less than 6 minutes remaining. He was injured by Jeremy Sochan's hand/wrist making contact with Sherman's face. There was no foul called. At the time of the injury, the score was tied and Sherman was unable to return. The contact appeared totally incidental. The Bears had already been on a 10-1 run to close the gap with Sherman in the game. Sherman wouldn't have been able to stop Mayer's late-game burst. Sherman's injury is not to blame for WVU being badly outrebounded once again (cue the world's smallest violin, as Bob Huggins whined about our rebounding aggressiveness postgame). Baylor had 14 more FG attempts than WVU which is why the Mountaineers lost.

Outlook: The ‘Neers will play Iowa State and Oklahoma State this week. WVU has lost 7 consecutive games. Fun Fact: This is WVU's longest losing streak since 2002. Things are starting to look bleak for arguably the most disappointing team in the conference this season. 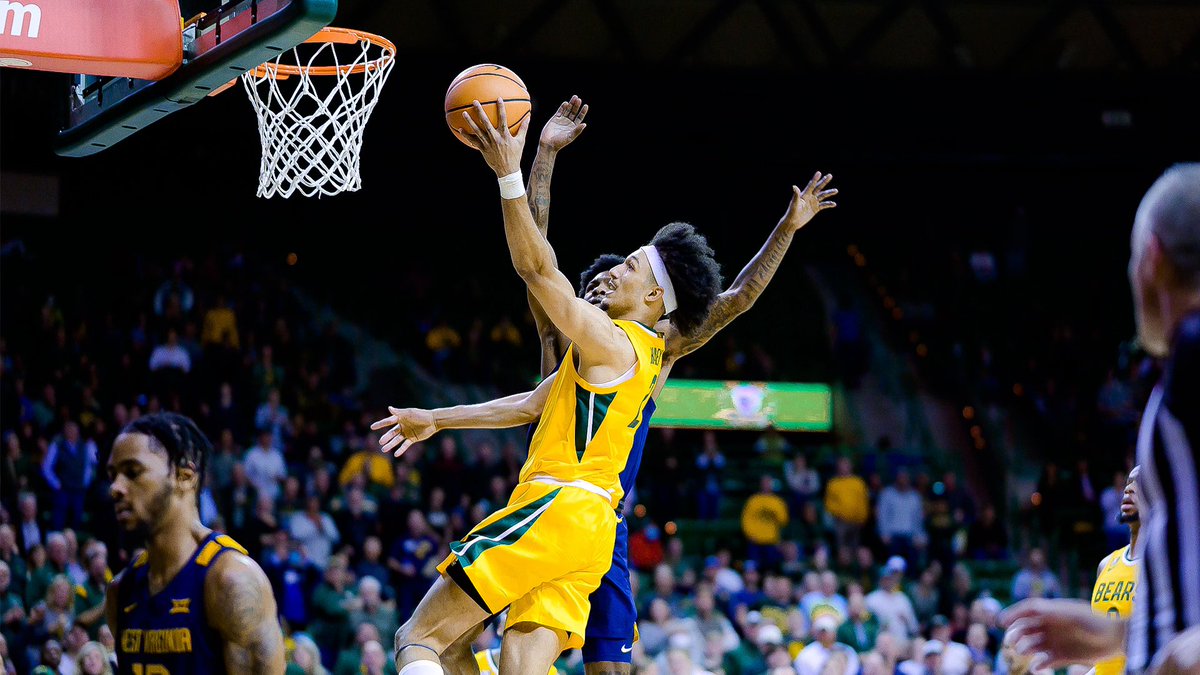 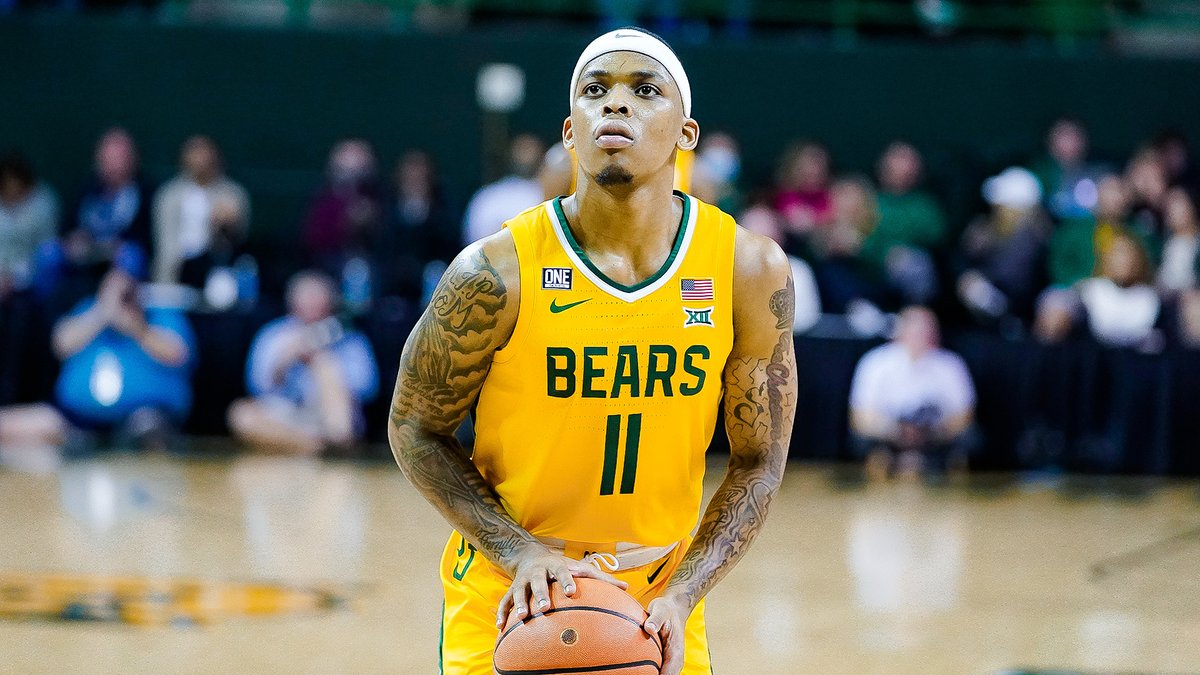