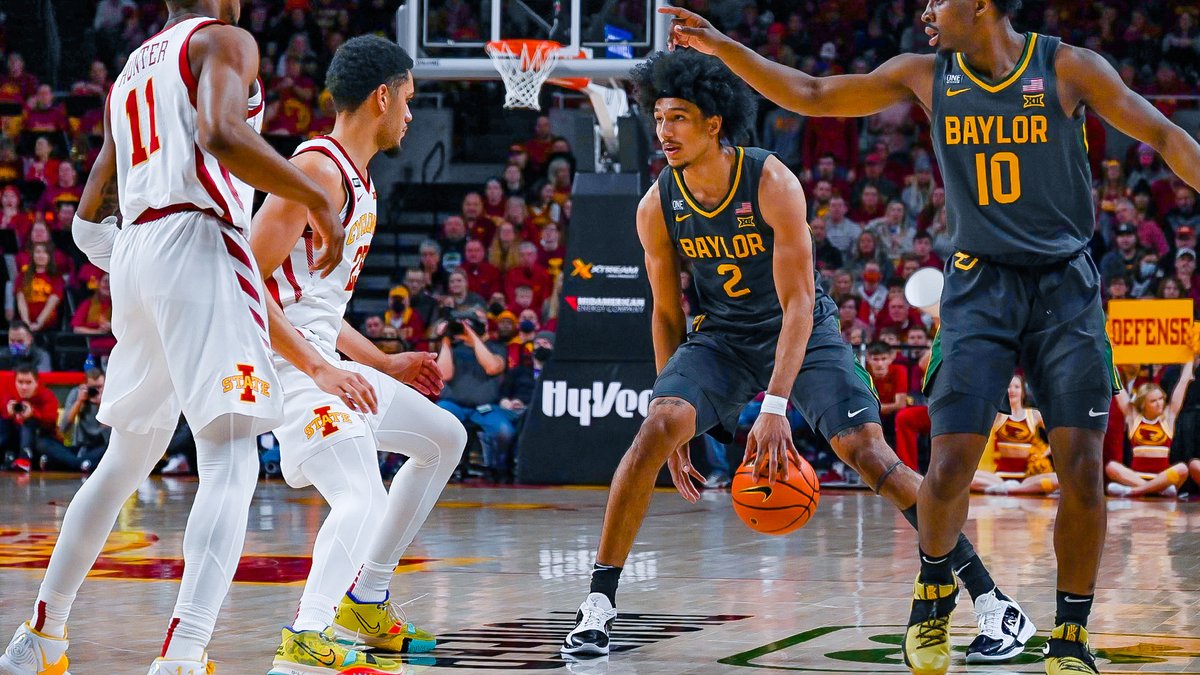 Happy New Year! 2021 was certainly the year of the Baylor Bears, complete with a Big XII title, National title, and finishing the year as the unanimous #1 team in the land. Here's hoping that 2022 can be just as dominant of a year for Baylor Men's Basketball. It isn't that far-fetched, this team is legit. The entire Big XII is loaded with talent. We are now into conference play. These Power Rankings likely will not exactly follow the conference standings but are instead offered based on how strong I think the team actually are, even if they've lost an additional game or two compared to the team(s) behind of them. If you'd like to check out last week's post, it can be found here.

Big XII Record (in non-conference games) from Monday, December 27 through Sunday, January 2: 5-0. Note: This will be the last time I post the conference record until the Big XII-SEC Challenge near the end of the month.

Big XII Team of the Week: Baylor. The Bears went 2-0 with their most impressive win of the season against the Cyclones in Ames.

It never gets old being on top. The Bears have earned this spot with their play all year, but Saturday's conference opening win against Iowa State was highly impressive (the Bears also looked good against Northwestern State earlier in the week). Baylor went into one of the most hostile environments in the nation and passed their toughest test of the season. ISU deserves a tremendous amount of credit, but I'll talk more about them later in this post. Baylor led the game from start to finish although they were never able to pull away. When several key players got into foul trouble, Scott Drew went with a small lineup with neither Jonathan Tchamwa-Tchatchoua nor Flo Thamba on the floor. That lineup played extremely well. James Akinjo had another great game, leading the team with 16 points. Over Akinjo's last 5 games, he is averaging 14.8 points, 5 assists, and 2.2 steals per game on over 40% from deep. If he keeps playing this well, Baylor should have a good chance to keep the momentum rolling. If there is something that concerns me about this squad right now, it would have to be the FT shooting (66% on the season which is "good" for 298th in the nation). The Bears have a sneaky tough week where they'll face a dangerous Oklahoma team before heading to Fort Worth this upcoming weekend.

The Jayhawks have had to scramble to find opponents the last couple of weeks as everyone on their schedule keeps getting hit with COVID issues. As such, they are one of 3 Big XII teams to have not played a conference game yet. Still, they've managed comfortable wins over the teams they've faced, and I don't see any reason to doubt that this team continues to be Baylor's biggest threat in the conference. Christian Braun was the star against Nevada earlier in the week while Jalen Coleman-Lands led the way against George Mason this weekend. There aren't a ton of weaknesses to this team right now. They are a below average free throw shooting team (much like Baylor), they rank 215th nationally in FT% this season. The Jayhawks will attempt to make their Big XII debut this week against Oklahoma State.

The prevailing criticism of Texas until now had been the lack of an impressive win. On Saturday, they finally got their signature win, a 15-point route of West Virginia (plus they beat up on Incarnate Word earlier in the week). It should be noted that this is only a Quad 2 win and that West Virginia was without their star guard, Taz Sherman and also key contributor, Gabe Osabuohien (both of whom are in COVID protocols). Even knowing that, Texas looked sharp. Minnesota transfer guard, Marcus Carr, was particularly effective, leading the team with 20 points. Where the Longhorns really impressed though was on the defensive end, forcing turnovers and not allowing clean looks for the Mountaineers. If there's something that Chris Beard will want to improve upon as conference play progresses, it will likely be rebounding (West Virginia is the only team in the conference with worse rebounding numbers on the season thus far). The Longhorns will face Kansas State and Oklahoma State this week (probably their easiest week of the remainder of the season).

Yes, the Cyclones lost the only game they played this week. However, they acquitted themselves rather well and I feel better about their prospects this season now than I did before the game. They played Baylor tougher than anyone else in the nation has and were very close to pulling off the upset. The offense continues to be the end of the floor where they have the most room for improvement. If ISU hadn't gone a miserable 1/14 (7%) from deep, they probably would've won. Izaiah Brockington is a serious Big XII PoY candidate and Kansas transfer Tristan Enaruna played his best game as a Cyclone. This team defends at an elite level and until further notice, I'm probably going to keep them in the top half of these Power Rankings. Things don't get much easier for ISU as they'll square off against Texas Tech on Wednesday before travelling to Norman to face the Sooners.

The Sooners won their only game of the week, a 2-point home win against Kansas State. While this win wasn't particularly impressive from a margin of victory perspective, OU never trailed and did lead by as much as 15 points. They took care of business like they were supposed to, they protected their home court, and no wins in this conference come easy. There are still some question marks with this team. Namely, they turn the ball over too much (they rank 282nd nationally in turnovers per play), they don't protect the rim well at all (they rank 295th nationally in block%), and they do not create a lot of second chance opportunities (they rank 321st nationally in offensive rebounds per game). This week will offer the Sooners 2 great opportunities to prove themselves but also 2 great challenges. They have the unenviable task of playing Baylor in Waco this week before hosting Iowa State this weekend. Winning one of this upcoming week's games would be huge for Porter Moser's team. 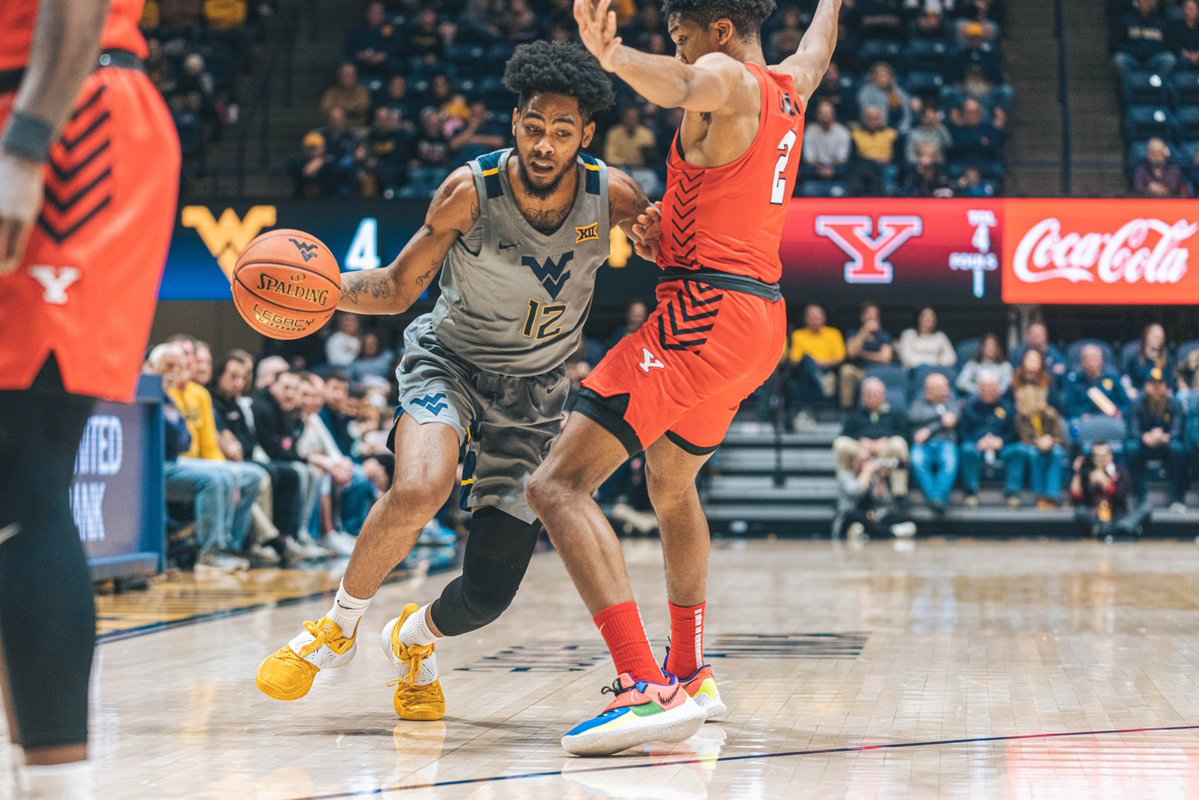 The Mountaineers lost the only game they played this week, a 15-point loss to the Longhorns. As mentioned above, WVU was without their leading scorer (and assist leader) Taz Sherman. They were also without Gabe Osabuohien (the team's 2nd leading rebounder) and Kedrian Johnson (the team's leader in steals). As such, I am by no means giving up on this group after one rough outing on the road against a good team, especially when they were severely short-handed. This team defends well but until they get Sherman back from COVID protocols, this offense will struggle to keep pace with teams in the top half of the conference. WVU's next game will come this weekend where they'll look to bounce-back at home against KSU.

The Red Raiders' conference opener against Oklahoma State was postponed due to the league's COVID procedures. So TTU's only game of the week was against lowly Alabama State. The fact remains that Tech only has one impressive win on the season (in OT, against a Tennessee team that has dropped in the AP rankings since that game). Their strength of schedule (per KenPom) is one of the weakest in the nation. I do not trust this offense to hold up against Big XII defenses. Tech ranks 208th nationally in turnovers per play. I also think they lack the size in their front-court to handle some of the league's better big men. Like the Sooners, TTU has an amazing opportunity ahead of them this week to silence doubters like me. They'll take on Iowa State on the road (yikes) before hosting Kansas this upcoming weekend. If they go 2-0, they'll rocket up these Power Rankings. Even winning just one game would likely be enough for them to jump all the way into the top half of the conference.

The Frogs haven't played since before Christmas. This offense remains too reliant on Mike Miles (who hasn't been remarkably efficient this year). Overall, this offense is below average which could be TCU's fatal flaw this year. They defend well and control the paint with Eddie Lampkin. TCU's conference opener is scheduled for this upcoming weekend when they'll play host to Baylor.

Like the Horned Frogs, the Cowboys haven't played since before Christmas. Much like their in-state counterparts, the Pokes turn the ball over too much (282nd nationally in turnovers per play), they don't defend the rim well (295th nationally in block %), and they rarely create second chance opportunities (281st nationally in block %). Assuming both games get played, the Cowboys have 2 tough challenges at home this week, first against Kansas and second against the Longhorns.

The Wildcats lost the only game they played this week, a 2-point loss against the Sooners. Mizzou transfer, Mark Smith, had his best game with KSU, leading the team with 25 points, 16 rebounds, and 5 assists. There were some encouraging signs from this game from the way Bruce Weber's team battled on the road. The Wildcats continue to be a middle-of-the-road offense and a solid defense. That should help them win a few games in conference play but none of them will be easy. That includes this week which will feature matchups against Texas and West Virginia. 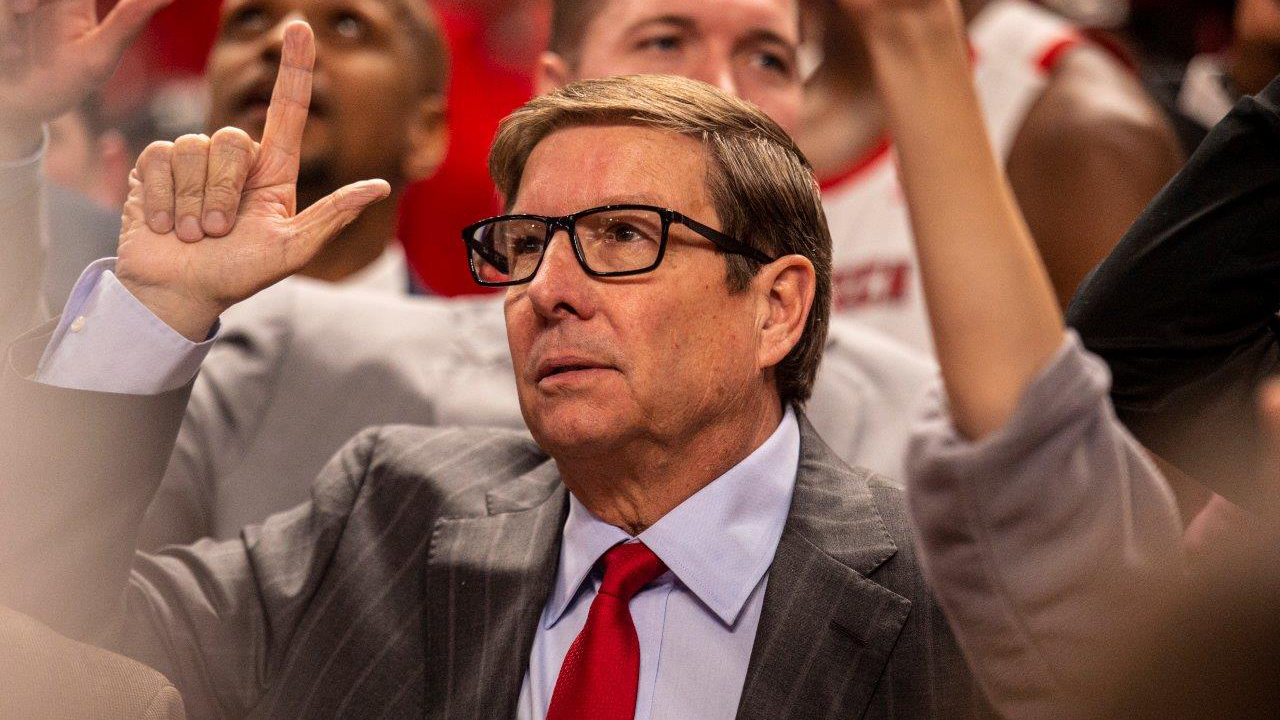 1) TJ Otzelberger, Iowa State. Despite losing his first game of the season this week, ISU is extremely well coached on the defensive end and looked like a legit top 10 team.

2) Porter Moser, Oklahoma. It wasn't pretty for Moser's Sooners against KSU but they continue to get the job done and the ability to finish close games is a good sign for this group.

3) Scott Drew, Baylor. Refusing to lose, Drew's crew got their best win of the season @ ISU this weekend.

4) Mark Adams, Texas Tech. The first year head coach has his team playing well and at 10-2.

1) Taz Sherman, West Virginia. Leads the league in points produced and his absence was heavily felt in WVU's loss to Texas.

2) Ochai Agbaji, Kansas. 2nd in the league in scoring and 3P shooting.

3) Izaiah Brockington, Iowa State. Top 3 in the league in scoring and rebounding.

4) Mike Miles, TCU. Top 5 in the league in scoring and assists.

2) Tyrese Hunter, Iowa State. 4th in the league in steals and 3rd in defensive win shares.

4) Flo Thamba, Baylor. Top 4 in the league in defensive rating and block %.

1) Kendall Brown, Baylor. Leads all freshmen in scoring and FG% and is top 3 among freshmen in assists and steals.

3) Jeremy Sochan, Baylor. Leads all freshmen in defensive rating and is 2nd among freshmen in win shares and box plus/minus.

2) James Akinjo, Baylor. Leads the league in assists and steals.

4) Tanner Groves, Oklahoma. Top 10 in the league in scoring, rebounding, and FG%. 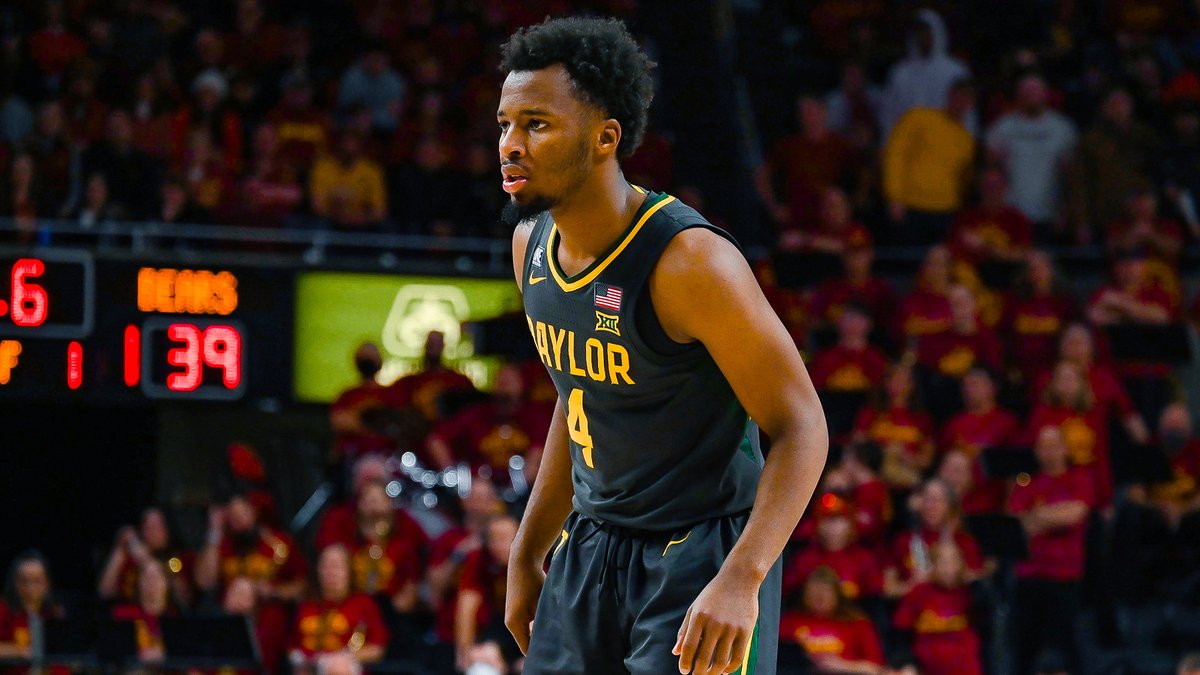