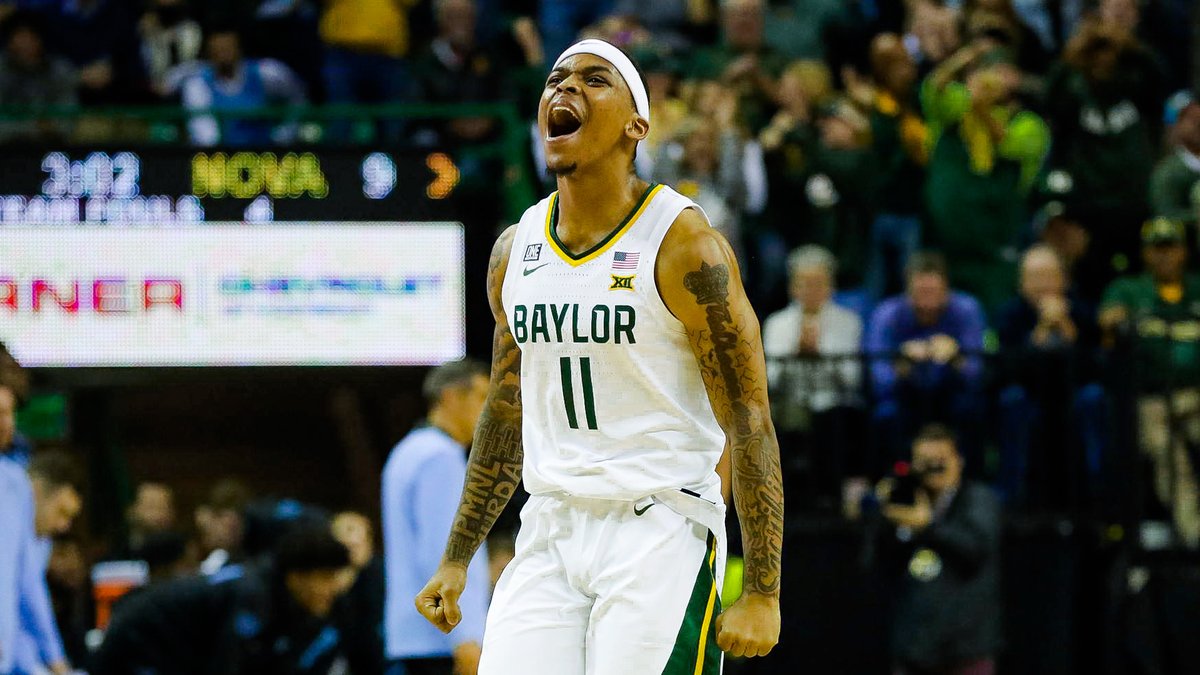 First things first, Merry Christmas Baylor Nation. It is a lot easier to enjoy the holidays when the Baylor Bears are undefeated and the #1 team in the nation (plus the defending national champs). I hope your holidays are full of cheer and JOY as we head into a new year and conference play.

Scott Drew has had tremendous success with transfers in recent years including notably MaCio Teague and Freddie Gillespie (both of whom are now playing professional basketball). This is especially true of transfer point guards. This will be the 6th consecutive season where the Bears will be led by a transfer point guard. The recent lineage of point guards from other schools goes back to Miami transfer, Manu Lecomte, and Yale transfer, Makai Mason, and of course, the last 2 years with Davion Mitchell. Now it is James Akinjo's (the man doesn't have a twitter account [baller move in my opinion], his Instagram handle is @akinjojames3) turn to run the show.

James Akinjo took a long trip from Oakland, California to wind up in Waco, Texas. The four-star, top 100 recruit out of Alesian College Prep in Richmond, California had offers Texas A&M, Cal Berkley, Maryland, UNLV, Iowa State and many more. He originally committed to UConn before decommitting and choosing to go play for Hall of Famer, Patrick Ewing, at Georgetown. James had tremendous success in his freshman year with the Hoyas. He chose to enter the transfer portal mid-year after 7 more games for Georgetown as a sophomore. He wound up in Tucson, playing for the Wildcats. His one season in the desert was another great one, earning him First Team All-PAC-12 last year.

Now, in his final season of eligibility, he has taken over the starting point guard position for the defending national champs. His strong collegiate career hasn't come without controversy. Hall of Fame head coach of the Syracuse Orange, Jim Boeheim, said of James following his transfer from Georgetown that Akinjo was a selfish player who never wanted to pass the ball and only wanted to shoot. Boeheim said that the Hoyas were better off without James. Boeheim was obviously wrong that Georgetown would be better with James. In Akinjo's 40 games at Georgetown, the Hoyas went 23-17 (0.575). In the 62 games since James left, Georgetown has gone 30-32 (0.484). It also doesn't make sense to say that James doesn't like to pass the ball. He loves it. He is great at it. As a freshman, he led the Big East in assists and last year he was second in the PAC-12 in assists.

James's performance thus far with the Bears has all but completely disproven any doubts about his intangibles. He is a great leader, a hard worker, and a selfless teammate. He has come in and immediately bought into Scott Drew's culture of JOY and has won over his coaching staff, his teammates, and Baylor fans. As they say, haters gonna hate. James is doing all he can to drown out and silence the doubters and the haters. He is a huge part of the reason why Baylor is currently the #1 team in the land despite all the roster turnover. He is getting it done on both ends of the floor and his contribution extends far beyond his scoring and his flashy style. 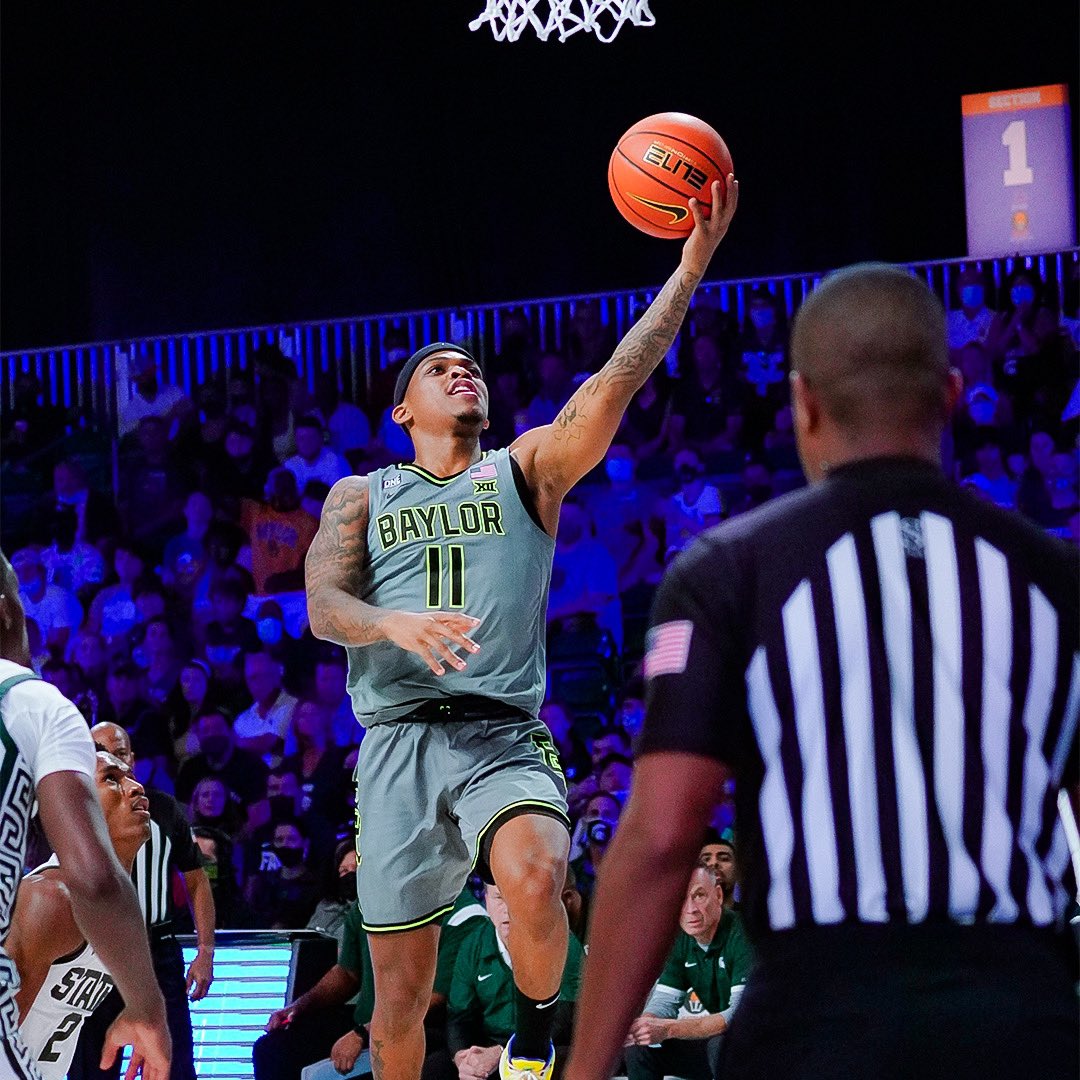 James's scoring is down this season. He is averaging a career low in both PPG and points per 40 minutes. This isn't all that troubling considering that his shot attempts are also down to a new career low. His scoring efficiency is also arguably as good as it has ever been as highlighted by the stats below:

Even though his 3P% is down year-to-year, it has not really hurt him because his 3PAr (the percentage of field goal attempts that are three-pointers) is a career low and down over 14% year-to-year. All this is to say that from a scoring perspective, there is nothing to worry about with James Akinjo. He is Baylor's third leading scorer on the season at over 11 PPG and I believe that he has the upside to play even better than what he has shown thus far. He went from 10.1 PPG over the first 7 games of the season to 13.8 PPG over the last 4 games (a 36.6% increase). Even if James just maintains his levels of scoring efficiency, he is still a guy you can look at to give you a big bucket late in a close game. His teammates trust him. His coaches trust him. Most importantly, he trusts himself and knows how skilled he is at putting the ball through the hoop. 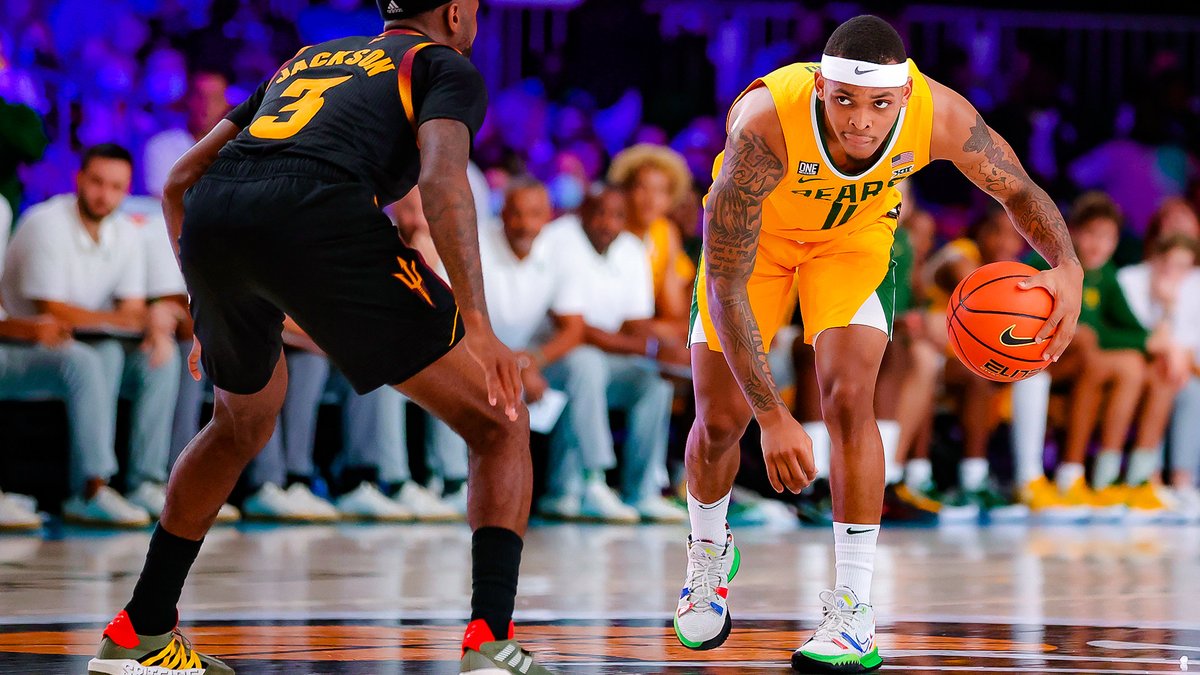 Controlling the tempo, breaking down defenses, and creating good looks for his teammates

James's puts his fingerprints on this offense in more ways than just his scoring output. This offense runs through him. He leads all Baylor guards in usage rate. Last season, Baylor had a duo of guards who could run the show in transition (Davion Mitchell and Jared Butler). This year, when a live-ball turnover or defensive rebound is going to trigger a fastbreak, the outlet pass is almost exclusively going to James if he's in the game. His ability to push the pace with his speed and quickness is huge for these Bears. Last year, Baylor had the highest tempo (as measured by possessions per game) since 2008. The tempo is even faster this season. It is great that this Baylor defense is so great at forcing turnovers (ranked 4th nationally in turnovers per play). It is even better that they are able to capitalize on those turnovers by scoring easy buckets in transition. That is where Baylor's length and athleticism give them a distinct advantage and James being able to run the fast break is critical. James is 2nd on the team (after Kendall Brown) in fast break field goal attempts per game and has not missed a fast break field goal this season.

In addition to his speed, James has great ball handling ability. These two skills help him blow past defenders and get down hill with or without a ball screen. He is 3rd on the team (behind JTT and Kendall Brown) in points scored in the paint this year. Beyond just the ability to score at the rim though, this enables him to break down defenses and create opportunities for back-cuts or kick-out threes.

Overall, his ability to create scoring opportunities for his teammates is what has set him apart this year. He is not only averaging a career high in assists this season, he also leads the Big XII in assists. Unlike last season where Baylor was led in scoring by 2 guys who could create their own shot, most of the players on this year's team are better scorers when they're being set up by their point guard.

Between his scoring and his facilitating, James leads the team in and is 7th in the Big XII in points produced. His offensive game leaves very little, if anything, to be desired. 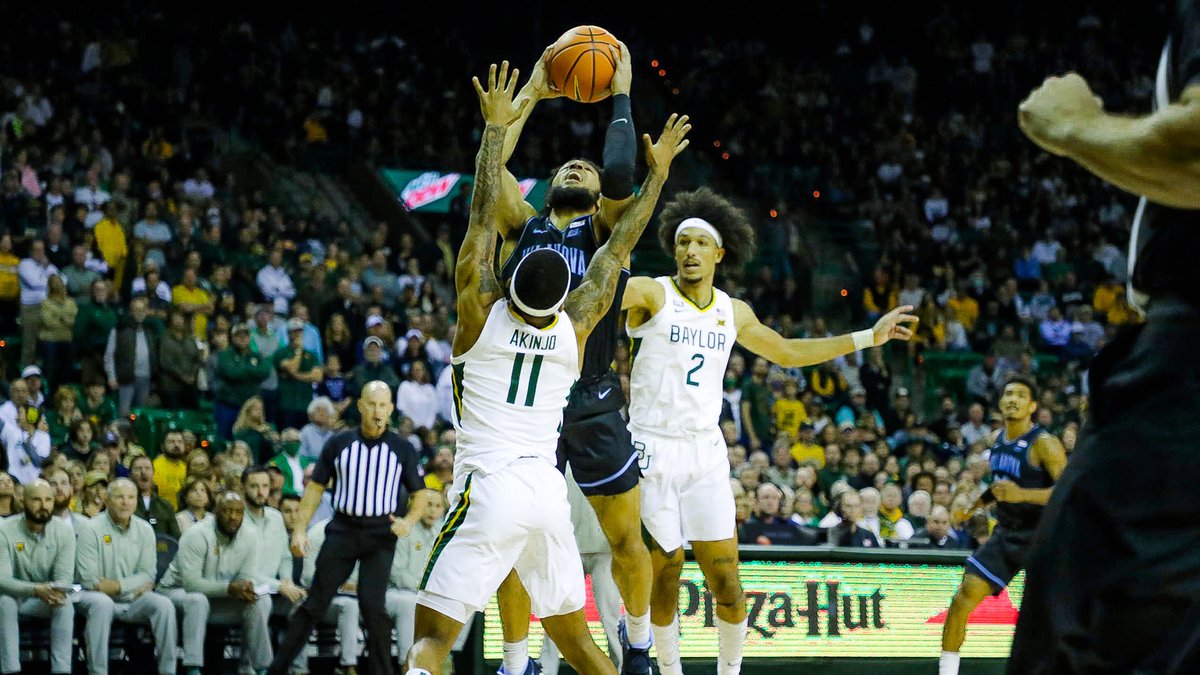 Now that we've settled that James is getting it done in a variety of ways on the offensive side of the floor, let's talk about what a menace he is on the defensive end. He is extremely disruptive and adept at forcing turnovers. He is averaging a career high in steals (up 57% year-to-year). In fact, he leads the Big XII in steals per game. His steal rate (the percentage of opponent possessions ending with a steal while on the given player is on the floor) is also a career high (up 70% year-to-year).

Looking at the advanced defensive metrics, James also impresses and has shown great improvement. His defensive rating is a career best (improved over 21% year-to-year). He also leads the team and is 4th in the conference in defensive win shares (per sports-reference.com) this season.

It's easy to understand why he is such an effective defender. He has great lateral quickness, a high basketball IQ, and best of all, a ton of experience (nearly 2500 career minutes with 3 great power programs). These attributes combined with his hustle and desire to be great make for a highly underrated defensive player. The ability to put him on dynamic guards like Kansas's Ochai Agbaji or TCU's Mike Miles will be huge once Big XII play begins. 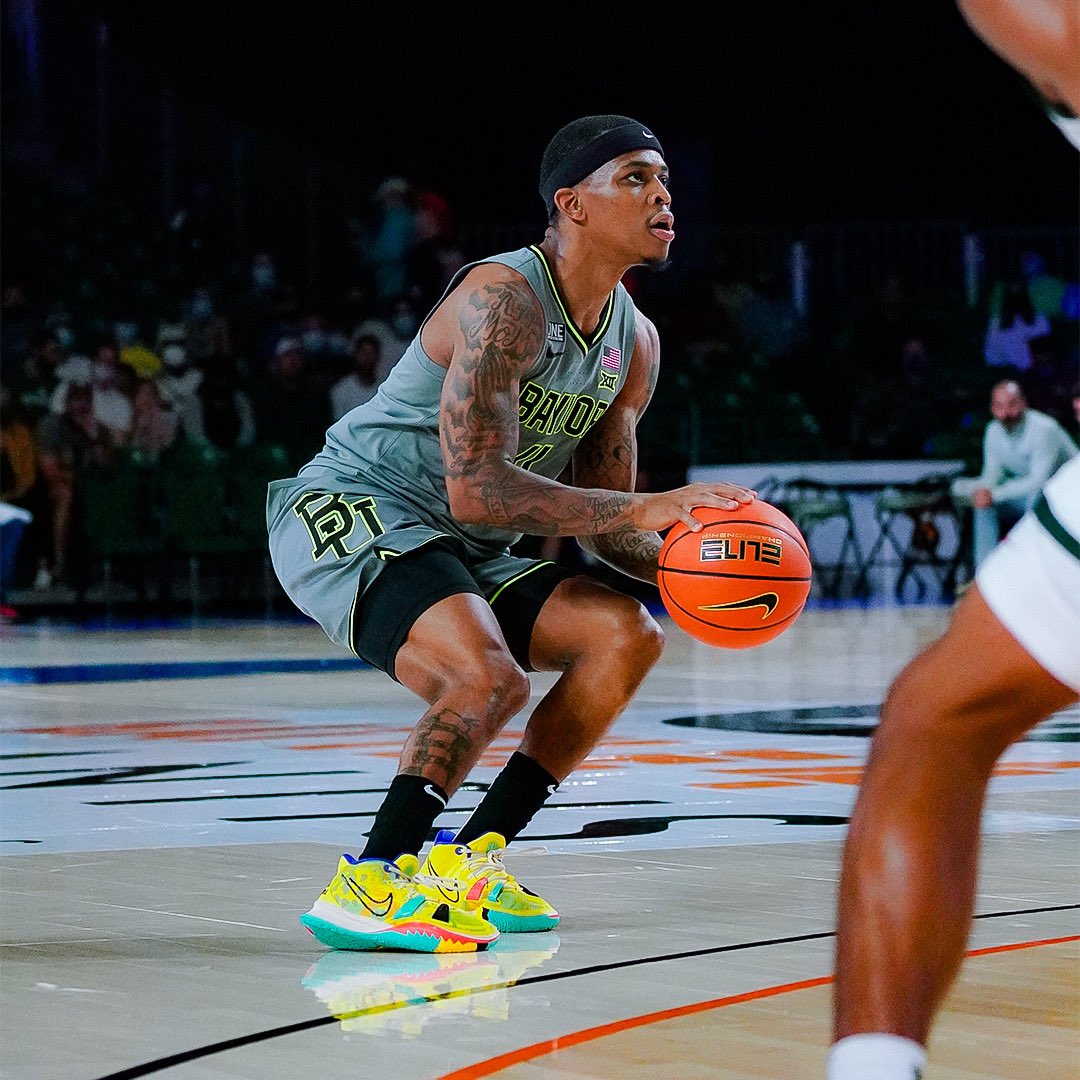 If not for Iowa State's Izaiah Brockington stuffing the stat sheet and leading his team to an undefeated record, I think James would probably be the favorite for Big XII Newcomer of the Year. See my most recent award leaderboards here. Even with Brockington playing the way he is, you never know what can happen over the course of conference play. James should be in the mix for the award all year long and if he just focuses on controlling what he can control, I think he'll have an excellent argument by season's end.

You know, there was another talented guard who played two seasons at Georgetown before going off to achieve greatness. He even wore a headband. While their styles of play are by no means identical, Allen Iverson and James Akinjo do have a few things in common. They are both a little undersized (AI: 6'0"; James: 6'1"). They are both very quick. They are both gifted passers. They are both gifted defenders (AI won Big East Defensive Player of the Year). They both won Big East Rookie of the Year. Sure, AI averaged more than 22 PPG in college while James is closer to 14 PPG. This difference in their scoring production can be primarily attributed to the fact that AI took significantly more shots per game than James does. On a per shot basis, they are much closer. James averages 1.21 points per FGA. AI averaged 1.31 points per FGA. For comparison, Jared Butler (who led the Bears in scoring last season) averaged 1.23 points per FGA. I'm not trying to say that James is going to win an NBA MVP like Iverson did. I am saying that he already has a tournament MVP trophy this year (Battle 4 Atlantis) and could have an opportunity to add one or two more tournament awards to his resume this season.

Aside from the individual awards for which I think he can contend, James is a driving force behind Baylor's success thus far. They will need him to continue to get the job done on both ends of the floor if they want to repeat last season's results. I like his chances to continue being a leader for this squad and elevating his teammates. It also wouldn't surprise me to see some regression (upwards) to the mean in terms of his scoring efficiencies. If he gets hot as a scorer it is pretty much lights out for the opposition, much like his predecessor, Davion Mitchell. This sneakerhead, eats, sleeps, and breathes basketball and the I truly believe that the best is yet to come for this young man this season.