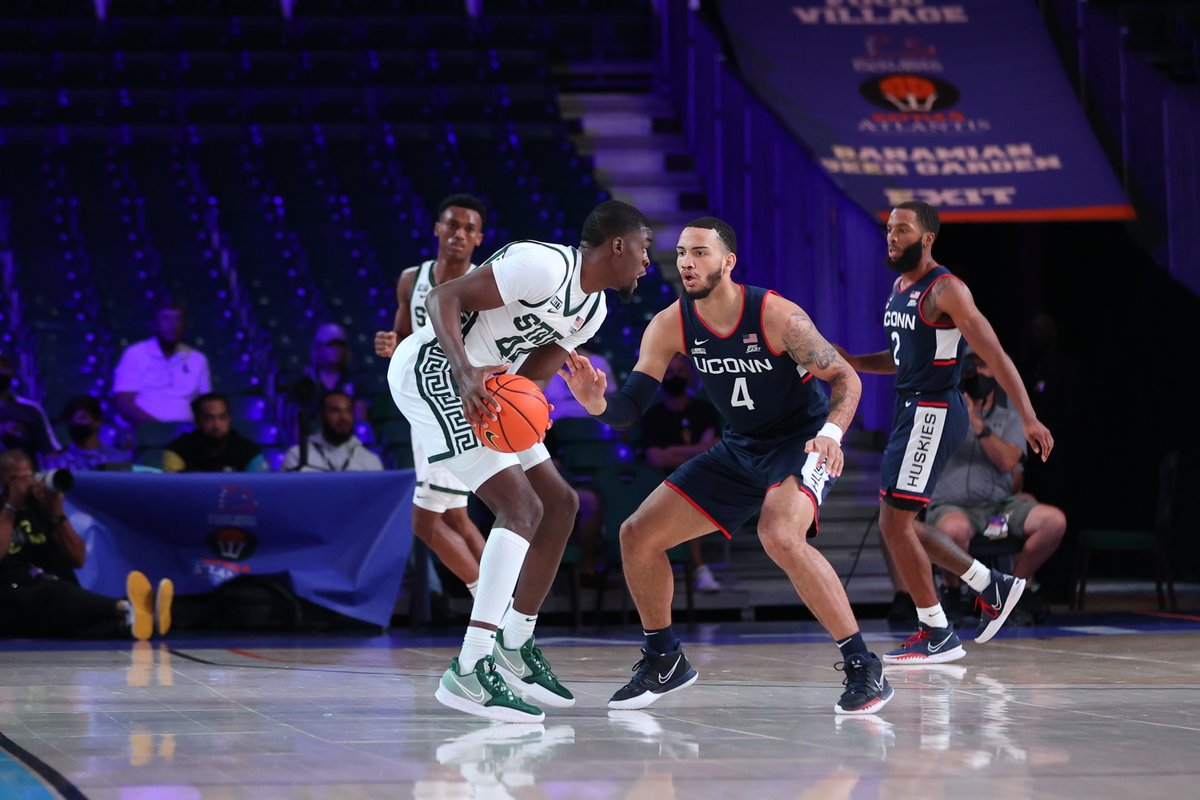 Today was made for leftovers (turkey sandwiches for the win), insane shopping deals, and, at least this year, a chance for Baylor to bring yet another tournament trophy back to Waco. Like yesterday's report, this one has been thrown together somewhat hastily. As such, the "Roster" section will only cover players getting significant minutes this season.

In my last post, on VCU, I was right about the game being a defensive struggle. I hope people realize that it was much more of VCU's defense (and effort level) being elite than Baylor's guard play being bad. Sure, Akinjo (and company) needs to be better and more careful with the ball, but I was impressed with the mental and physical toughness displayed by Baylor. Also, Scott Drew's halftime adjustments were just what the doctor ordered.

Michigan State is undeniably a "Blue Blood" program in men's college basketball. They have a 2 national titles (most recently in 2000), 10 Final Fours (7 since 2000), and over 1500 all-time wins. The Spartans entered this season after losing their leading scorer and only player to average over 10 PPG a year ago (Arron Henry is in the NBA). Henry was also the team leader in rebounds, assists, and steals last season. Further, Jeremy Langford graduated, and Rocket Watts transferred to Mississippi State. Each of those two was among the team's top 4 scorers a year ago. Joey Hauser is the only returning player who averaged more than 8 PPG a year ago. The Spartans started the season with a somewhat lopsided 13-point loss to Kansas in the Champions Classic. They have since won 5 straight including 2 nail biters (combined margin of victory of 6 points) in this Bad Boy Mowers Battle 4 Atlantis. They have been good on the defensive end this year, holding each of their last 5 opponents under 62 points.

Tom Izzo - Head Coach - 26th Season as HC (38th with program). If you are unfamiliar with this Hall of Famer, you must not follow college basketball very closely. Still, it doesn't hurt to talk about him a bit. This Michigan native has 1 national title, 8 Final Fours, 10 Big Ten championships, and has won over 71% of the games he has coached. His career winning percentage is higher than Jim Boeheim, Bob Knight, Bob Huggins, Eddie Sutton, and Henry Iba. He has coached 11 First Round NBA draft picks which doesn't include Draymond Green. Historically, his teams have been characterized by their toughness, strong defense, and great rebounding. Last year's 15-win campaign was the fewest wins MSU has had in a season since Izzo took over and also snapped a 9-year streak of 20+ wins.

Tyson Walker - #2 Junior 6'0" Guard - New York state native started his collegiate career with the Northeastern University Huskies where he played the last 2 years and established himself as a complete guard who can be a high-volume scorer (averaged nearly 19 PPG last year) and a facilitator for his teammates. He is a solid 3P shooter (career 36% on 4 attempts per game) although he has not taken a lot of threes so far with the Spartans (5 total attempts in over 120 minutes this season). He is a disruptive defender and praised by the coaching staff for his high basketball IQ.

Max Christie - #5 Freshman 6'6" Guard - Illinois native was a 5-star prospect with offers from Baylor, Michigan, Villanova, Virginia, Purdue, Wisconsin, Illinois and others. He comes in with a strong reputation on the offensive end as a long guard who can operate as both a scorer and distributor. Coaching staff has suggested that he needs to improve defensively to reach his full potential. His scoring efficiency has been suboptimal so far this season (33% from the field and 26% from deep). Still, he is not shy and shoots with confidence even when shots haven't been falling.

Malik Hall - #25 Junior 6'8" Forward - Illinois native is a versatile forward who can play the 3 or the 4. He appeared in 59 games over his first 2 seasons (starting just 18 of those) but is having a career year, averaging career highs in points, rebounds, FG% and 3P%. Fun Fact: He attended the same high school as Baylor's Kendall Brown. Coaching staff considers him a glue guy who helps in more ways than show up in the stat sheet. Despite struggling against UConn (only scored 2 points in 27 minutes), he has been highly efficient as a scorer this season (56% from the field and 45% from deep on 2 attempts per game).

Gabe Brown - #44 Senior 6'8" Forward - Michigan native was considered by the team to be the squad's most improved player coming into this season. He is a gym rat, known for his ability to space the floor with his outside shooting (career 37% from deep on 2.5 attempts per game; 38% this season on 5 attempts per game; over 63% of his field goal attempts this season are three-pointers).

Marcus Bingham, Jr. - #30 Senior 7'0" Center - Michigan native is a powerful presence in the paint. He is better defensively than he is offensively although he is averaging career highs in points, rebounds, blocks, and FG%. He has appeared in 89 games as a Spartan and has started all 6 this year. He has been efficient scoring in down low (55% on 9 FGAs per game). Additionally, he has been great at both grabbing rebounds and at blocking shots (averaging 14.7 rebounds per 40 minutes and 6.3 blocks per 40 minutes).

Joey Hauser - #10 Senior 6'9" Forward - Wisconsin native played his first season at Marquette before transferring to MSU and appearing in 28 games last season. He is considered an excellent passer and a hard worker. This year has been a major struggle from a scoring efficiency standpoint (30% from the field). He has been a productive rebounder (averaging over 6 RPG). His freshman year with the Golden Eagles, he was a good 3P shooter (42% on 3 attempts per game) but that part of his game has not made the trip to Lansing yet.

AJ Hoggard - #11 Sophomore 6'4" Guard - Pennsylvania native is an explosive point guard who attacks downhill, he turns the corner well coming off middle ball screens. He is an inefficient scorer (career 34% from the field and 4/23 [17%] from deep). Last season, he showed off a respectable 1.82 assist-to-turnover ratio while this season his turnover rate has gone from 3.3 TOs per 40 minutes to 4.9 TOs per 40 minutes (nearly a 50% increase).

Jaden Akins - #3 Freshman 6'4" Guard - Michigan native is quick off the bounce and athletic finishing near the rim. In the 6 games he's played in this season, he is averaging 37% from the field and 14% from deep in less than 14 MPG. Fun Fact: He was teammates with Baylor's Kendall Brown at Sunrise Christian Academy (in Kansas). The 4-star prospect chose MSU over Louisville, Florida, and Northwestern.

Julius Marble II - #34 Junior 6'9" Forward - Dallas native is thick and strong. He has appeared in 60 games in his MSU career (this season 12 MPG). He is an efficient scorer (career 56% from the field) and productive rebounder (averaging 14.2 rebounds per 40 minutes). 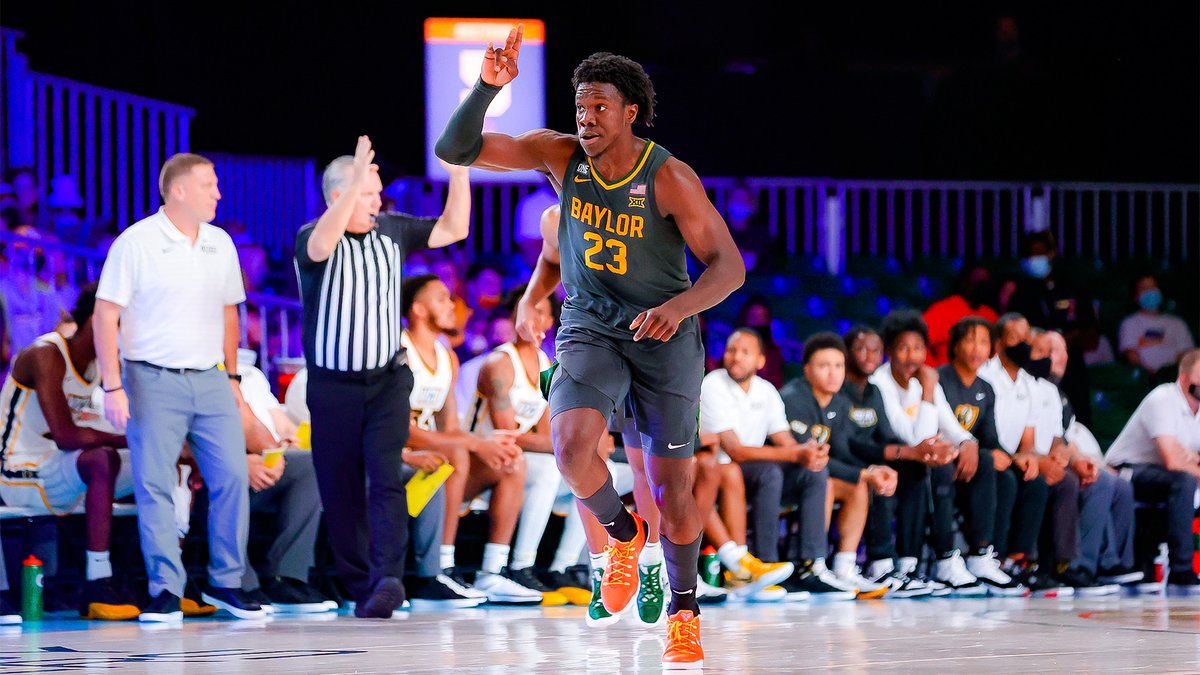 The battle on the boards will be huge here and is definitely a strength-on-strength matchup. Baylor is an excellent offensive rebounding team (21st in the nation) while MSU is an excellent defensive rebounding team (13th in the nation). The Spartans will try to get to the free throw line a lot and get our bigs into foul trouble. Even if they have early success on this front, it didn't matter that Thamba and Sochan were in foul trouble for virtually all of the VCU matchup. Fun Fact: These 2 teams have faced each other 1 time before, in 2016, in the Battle 4 Atlantis semi-finals. Baylor won that game convincingly 73-58 before going on to defeat Louisville to claim the tournament championship. I expect Baylor's phenomenal defense to force a lot of turnovers (probably 18+) and score in transition. When forced to play in the halfcourt, the Bears will utilize their elite ball movement (they are #1 in the nation in assists) to beat Izzo's stingy defensive often enough. This will be another tough, relatively low scoring game (like yesterday). I like Akinjo to have a bit of a bounce back game and to compliment Brown and Flagler in a strong performance. Baylor will defeat Michigan State 69-63.