As I prepare this report, I am blessed to be in Florida with my family for Thanksgiving Week. If any of you are travelling this week, please be safe. I am immensely looking forward to all the college basketball this week, most importantly, the Bad Boy Mowers Battle 4 Atlantis featuring the Bears. As was the case with our last opponent, I was unable to watch film on this team because the PAC-12 is dumb. Still, I'll do the best I can on this report and hopefully the remainder of these reports will be against teams for which I will be able to study film.

In my last post, on Stanford, my prediction was on in some ways (it was close in the first half [6 point lead at the break], Baylor used an increased tempo to eventually pull away [21-3 run to begin the second half], and Stanford hung around early due in large part to their ability to outrebound the Bears [15-9 advantage in the first half]) and off in others (I drastically overestimated Stanford's ability to fight back after Baylor's blitz to start the second period). Still, for our most dominant performance of the young season to come against the best team we've faced thus far (especially with Flagler out) is amazing. Yay for deforestation, I guess.

Unlike their big brother in Tucson, Arizona State certainly has not traditionally been a basketball school. They have never made a Final Four in school history and have not made it past the first weekend of the tournament since 1995 (vacated by NCAA for a multitude of violations; meaning that it has been since 1975 since they advanced past the first weekend where it counted) and have no NCAA Tournament wins since 2009. They have never won a PAC-12 championship (their last conference title came in 1975 as a part of WAC). The Bobby Hurley era has seen been largely successful. Before last season's massively disappointing campaign, ASU had won 20+ games in 3 consecutive seasons (only two other such streaks in program history). The program has produced prominent NBA players like James Harden, Byron Scott, and Luguentz Dort. Fun Fact: Baylor fan favorite, Isaiah Austin's uncle, Isaac, was a star player for the Sun Devils. Last season, ASU entered the season with a preseason rank in the AP poll of #18. They finished the year unranked and with a losing record of 11-14. To make matters worse, last year's disappointing squad loses its top 3 scorers (Remy Martin transferring to Kansas, Alonzo Verge Jr. transferring to Nebraska, and Josh Cristopher going to the NBA) coming into this season. Those 3 players averaged a combined 93 minutes and 47 points per game. The silver lining is the return of Marcus Bagley who was the team's 4th leading scorer (averaging nearly 11 PPG) and leading rebounder.

Bobby Hurley - Head Coach - 7th Season with program (all as HC). New Jersey native was a star point guard in high school (leading his team to a combined record of 115-5 in 4 seasons) before going to Duke to play for Coach K. He was part of the Blue Devils teams that went to 3 Final Fours and won back-to-back national titles (Christian Laettner and Grant Hill were the other stars of those teams). Fun Fact: Hurley remains the NCAA all-time assists leader (1076). His coaching career began at Wagner (on the staff of his younger brother, Dan) and then Rhode Island where he was an assistant before becoming the head coach at Buffalo where he remained until getting the job in Tempe. He has earned a reputation for developing great guards and his teams are typically characterized by their fast-paced tempo fueled by his tough defenses forcing a lot of turnovers.

Marreon Jackson - #3 Senior 6'1" Guard - Cleveland native transferred from Toledo where he played the last 4 years, starting 126 games and scoring nearly 1800 points and having over 550 assists for the Rockets. He is a high-volume, medium-efficiency scorer (career 40% from the field on 11 attempts per game and 37% from deep on 6.5 attempts per game). Good passer, rebounder, and perimeter defender.

Luther Muhammad - #1 Junior 6'3" Guard - New Jersey native transferred from Ohio State where he played the last 2 seasons. He is a relatively low-efficiency scorer (37% from the field and 35% from deep) who is disruptive on defense. He is averaging a career high in scoring (10 PPG), rebounding (4.3 RPG), and steals (1.7 SPG) although his 3P shooting has not shown up yet (3/14 [21%] to start the year).

Kimani Lawrence - #4 Senior 6'6" Forward - Rhode Island native is in his 5th season playing for the Sun Devils (110 career games played in). This year, he is the team's leading scorer (16 PPG) and rebounder (10 RPG; 4.3 ORPG). He is averaging a career high in FG% (64%). He has made a profound impact on defense as well. Early in his career, he would mix in 3P shots (averaging more than 2 attempts per game). Recently though, he has abandoned perimeter jump shots (only 6 three-point attempts over his last 27 games).

Marcus Bagley - #23 Sophomore 6'8" Forward - Phoenix native is a long wing. He is an in inefficient scorer (38% from the field) who is most productive on the perimeter (38% from deep on nearly 6 attempts per game). He is tenacious on the glass (5.7 RPG). Last season as a freshman, he got himself into foul trouble a little too often although he has been much better to start this year. He is the younger brother of Marvin Bagley (playing in the NBA) and the son of Joe Caldwell who is the highest draft pick in ASU history. He missed the last game with a knee injury and it is unclear if he will play against Baylor.

Jalen Graham - #2 Junior 6'9" Forward - Phoenix native is an old school power forward. He is freakishly long (7'2" wingspan) and athletic. The coaching staff raves about the energy he brings. He protects the rim and is an efficient scorer (59% from the field in his career). Terrible free throw shooter (career 47% from the line and 0/6 on the season).

Alonzo Gaffney - #32 Junior 6'9" Center - Cleveland native started his collegiate career with a season at Ohio State before playing last year with Northwest Florida State College (JUCO). Very long arms (7'3.5" wingspan). He has filled the stats sheet so far this year and made an impact on both ends of the floor. He has some range (3/9 from deep this season). He has fouled a bit too much this year (3.5 PFs per game).

Jamiya Neal - #55 Freshman 6'6" Forward - Ohio native attended high school in Phoenix. He is a wing who has looked good in the small sample size of the first 4 games (45% from the field and 2/5 from deep).

Enoch Boakye - #14 Freshman 6'10" Center - Canadian native big man is strong and physical underneath. He comes in as a four-star prospect and one the best front court prospects in last year's recruiting class. In the very small sample size of less than 40 total minutes this season, he is averaging 18.4 rebounds per 40 minutes which would obviously be fantastic for ASU if he could maintain that efficiency in a larger role.

Micah Burno - #12 Junior 6'0" Guard - Scottsdale, Arizona native is a deep bench guy who has not played this year.

Demari Williams - #21 Freshman 6'6" Forward - Fulshear, Texas (near Houston) native has not played yet this season. He was a three-star recruit who had offers from TCU and Baylor.

Justin Rochelin - #10 Freshman 6'4" Guard - California native has not played yet this season. He was a three-star recruit who had offers from Oregon State and Temple.

Will Felton - #34 Freshman 6'8" Forward - Raleigh, North Carolina native has not played yet this season. He was a three-star recruit who had an offer from Miami (Fl.).

Chase Courtney - #40 Sophomore 6'10" Center - Scottsdale, Arizona native is a transfer from San Jose State where he played the last 2 seasons. He has not yet played this year.

Austin Ronzone - #22 Sophomore 6'1" Guard - California native has not played yet this season.

Cade Ronzone - #20 Sophomore 6'2" Guard - California native has not played yet this season. Brother of Austin.

Jeff Grace - #24 Freshman 6'3" Guard - Illinois native has not played yet this season.

Jordan Williams - #25 Freshman 5'10 Guard - Los Angeles native has not played yet this season.

As stated in the "Intro" section above, this report's film study is not based on having viewed any ASU game in its entirety, but instead piecing together clips on YouTube from all 4 of ASU's games. 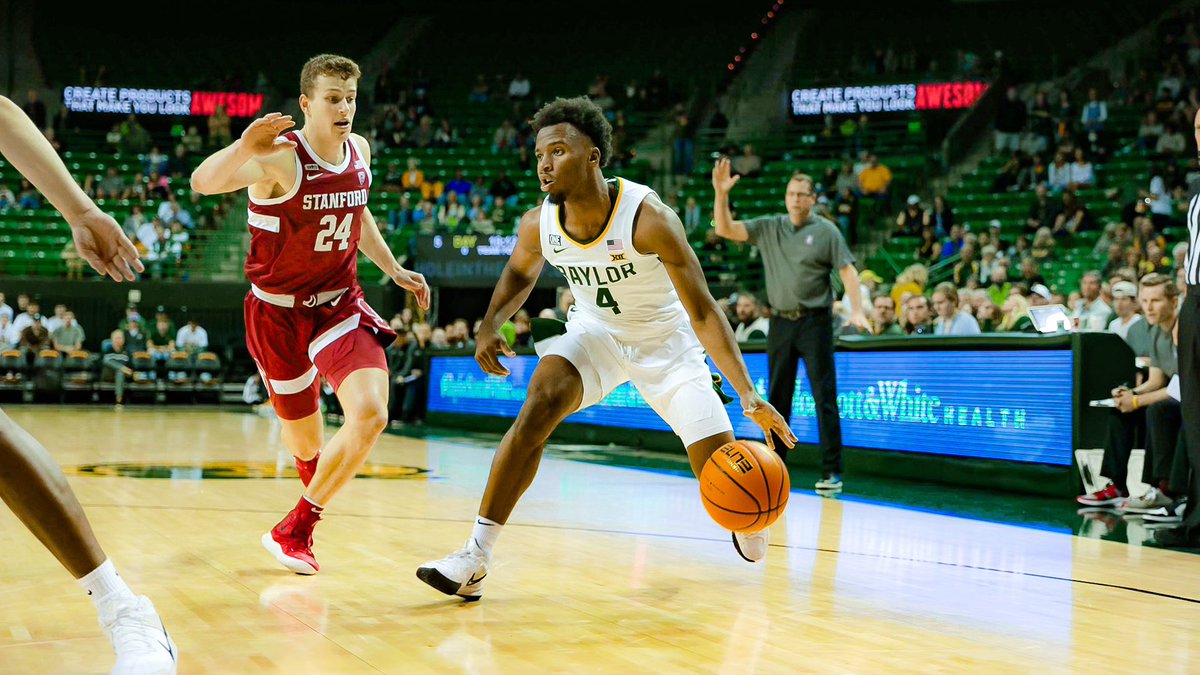 It can be difficult to not get carried away after Baylor's performance against Stanford, but my confidence in the Bears for this game is rather high. Baylor should be able to match ASU's length and athleticism. Fun Fact: Baylor is 4-0 all time against Arizona State. I expect this to be a high scoring, high octane, end-to-end game. This should favor the Bears who turn the ball over less and are better finishing at the rim than the Sun Devils. I do not expect Baylor to ever extend the lead beyond 20 points (although it'd be nice if they do). Still, Baylor is better than Arizona State and will use great ball movement to create better shots than the Sun Devils. Brown will limit Lawrence and the Bears will chase the ASU off the three-point line. Baylor will defeat Arizona State 94-81.