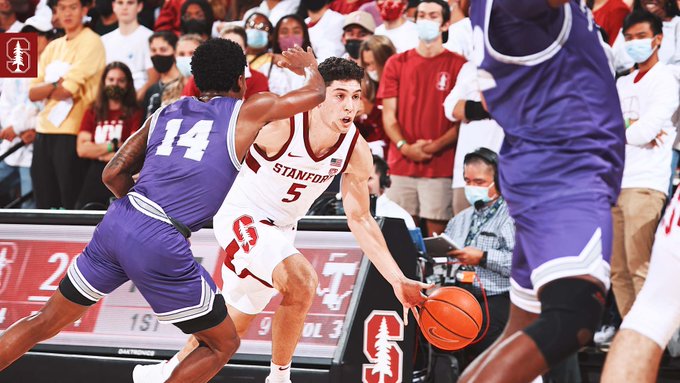 While past scouting reports have been hindered (slightly) by inadequate time to research the given opponent. This time, my excuse is an unavoidable one. The PAC-12 conference has the WORST broadcast deal of any major conference BY FAR. The fact that it is significantly easier to watch ALL Nicholls State games than it is to watch ANY Stanford games is a sad joke. My ability to watch film on this team is virtually non-existent. I have done the best I can on YouTube but the "Film Study" section of this scouting report will be very light compared to previous (and future*) versions.

*Our next game, against Arizona State, will present the exact same problem because none of their games this season will be presented on anything other than the PAC-12 Network or CBS Sports Network (neither of which allow on-demand streaming).

In my last post, on Central Arkansas, I was right about it being Baylor's most dominant performance of the young season and about the Bears pounding the paint early (26 of Baylor's 43 first half points came in the paint) to set up threes later in the game (4 of Baylor's 5 made 3P shots came in the second half). Brown and Akinjo looked great and Sochan looked good (not his best shooting performance, but he dominated the glass). I understated the margin of victory slightly (predicted a 39-point victory compared to the 45-point win we actually saw), but I can certainly live with that.

While Stanford is by no means a basketball school, they do have a modicum of tradition. They won a national championship (in 1942, when the NCAA tourney only included 8 teams). Their most recent Final Four came in 1998. From 1995-2008, they made 13 of 14 NCAA Tournaments. Since that stretch, they have made March Madness only 1 time (in 11 seasons). Fun Fact: Baylor and Stanford have never played each other in men's basketball. On the recruiting trail, they have had some recent success (finished in the top 3 in the conference in each of the past 2 years). The team lost 3 of its top 4 scorers from last year (Oscar da Silva is playing professionally in Germany; Ziaire Williams was drafted 10th Overall by the Memphis Grizzlies [one spot after Baylor's Davion Mitchell]; and Daejon Davis transferred to Washington). Silva was also the team's leader in rebounding, blocks, and FG%. Stanford's roster construction is unique in that they bring back 12 players who saw game action for the Cardinal last year and also did not accept any transfers.

Jerod Haase - Head Coach - 6th Season with program (all as HC). The California native played first for the Cal-Berkley Golden Bears before transferring to Kansas and playing 3 seasons with the Jayhawks. After graduating, Haase immediately went into coaching as an assistant under his former coach, Roy Williams. As such, he started at Kansas before following Williams to North Carolina. His first HC job was at UAB before taking the Stanford job. Since arriving in Palo Alto, the Cardinal have not made the Big Dance despite having a winning record in 3 of those 5 seasons. Like his mentor, Roy Williams, Haase preaches toughness and selflessness to his teams. This season he has experimented greatly with his rotations through the first 4 games, never using the same starting lineup twice.

Michael O'Connell - #5 Sophomore 6'2" Guard - New York state native returns after a strong freshman campaign last year. A season ago, he was a medium-volume, medium-efficiency scorer. So far this year however, he has shot the ball more (his field goal attempts per game are up about 60%) and been less efficient (his FG% is down 25% and his 3P% is down almost 40%). The good news for him is that he is boasting a strong 3.5 assist-to-turnover ratio and has looked like the team's most disruptive perimeter defender. Lacrosse star in high school. Coaching staff raves about his intangibles, particularly his leadership and work ethic. One of just two players to start all 4 games thus far for Stanford.

Harrison Ingram - #55 Freshman 6'7" Forward - Dallas native has led the Cardinal in scoring through the first 4 games this season. Coming in as a consensus 5-star recruit and top 20 national prospect, he is among the highest profile recruits in program history. He is a versatile wing who has shown promise as a high-volume, high-efficiency scorer (averaging 50% from the field on 10 attempts per game and 43% from deep on 3.5 attempts per game). He has filled the stat sheet in other areas as well (averaging 6.5 RPG and a strong assist-to-turnover ratio of 3.5).

Spencer Jones - #14 Senior 6'7" Forward - Kansas native has started 58 of 62 games played in over the last two seasons (and this one). He is a strong rebounder and an excellent defender. A prototypical 3-and-D wing, in his career he has averaged 5 3P attempts per game and has made 40% of them (he is 3/15 [20%] to start the season). One of just two players to start all 4 games thus far for Stanford.

Jaiden Delaire - #11 Senior 6'9" Forward - Connecticut native has appeared in 90 career games for Stanford (18 MPG). Last year, he started 21 of 24 games in which he played and averaged career highs across the board. The main drawback on this kid is the tendency to turn the ball over. He is a high-volume shooter (nearly 8 field goal attempts per game) the does most of his damage inside the arc (only 23% of his field goal attempts are three-pointers) although his has been highly efficient from deep this season (43%). Recognized as last year's PAC-12 Most Improved Player.

Maxime Raynaud - #42 Freshman 7'1" Center - Parisian big man has stepped into the starting rotation immediately. Thus far, he has been a medium-volume, high-efficiency player (66% from the field on 6 attempts per game and 2/4 from deep). He has also been a productive rebounder. The thing that makes this young man special is the versatility in his offensive game. For a player his size to be able to score with his back to the basket, to put the ball on the floor and drive (and pass), and to shoot from the outside brings star bigs like Joel Embiid, Nikola Jokic, and Kristaps Porzingis to mind. He allows the Cardinal to space the floor and attack offensively in a variety of ways.

Lukas Kisunas - #32 Senior 6'10" Center - This Lithuanian big has played in 90 career games (11 MPG). Offensively he is strictly a low-volume, low-post scorer. He is a terrible FT shooter (below 50% on his career). Most of his impact is as a rebounder (averaging 9.8 rebounds per 40 minutes). His scoring efficiency this season is a career high 63% from the field.

Max Murell - #10 Sophomore 6'9" Forward - Omaha native played in 21 games a year ago (no starts) and has started 2 of the team's 4 games this season (12.5 MPG). Statistically he has struggled across the board, especially this year as the team has asked him to play a larger role (21% from the field on 5 attempts per game and 4/19 [21%] in his career from deep). He is heralded as an elite defender by the coaching staff who fawn over both his ability to switch onto smaller players and also to protect the rim.

Sam Beskind - #24 Junior 6'4" Guard - Tucson native redshirted his first year on campus before getting garbage-time minutes the last two seasons. This year he has 2 starts and is averaging 12 MPG. He has struggled mightily in his new role so far (1/7 from the field and not much more than a few steals to show for his newfound minutes on the floor). Fun Fact: He was part of the Stanford basketball clinic for local kids last winter (3 other players also participated plus one of the Golden State Warriors' young players).

Isael "Isa" Silva - #1 Freshman 6'4" Guard - Sacramento native is considered by the coaching staff to be a point guard with a strong feel for the game. In the 4 games this season, he is averaging 50% from the field and is 4/7 (57%) from deep. He has shown promise as a playmaker but must cut down on his turnovers to become a bigger part of the rotation. He was a consensus 4-star and top 100 recruit with offers from Arizona, Arkansas, Texas, and USC.

Brandon Angel - #23 Sophomore 6'8" Forward - San Diego native comes from the HS basketball powerhouse of Torrey Pines. He is primarily a 3P shooter and the coaching staff believe that he has the potential to be among the best shooters in the conference. In his career (21 games, 10 MPG), he averages 1.2 3P attempts per game and makes 30% of them.

James Keefe - #22 Junior 6'9" Forward - Los Angeles native is a legacy. His mother was a four-time All-American (and eventual Olympian) volleyball player for the Cardinal and his two sisters are currently on the Stanford volleyball team. Fun Fact: His father, Adam, is Stanford's all-time leading rebounder and third all-time leading scorer. He is a relatively deep bench guy, low-volume, medium-efficiency scorer (47% from the field on 1.4 attempts per game). In very limited minutes (5 per game) this season, he has shown some efficiency as a rebounder (averaging 12.8 boards per 40 minutes).

Noah Taitz - #20 Sophomore 6'3" Guard - Las Vegas native played for high school powerhouse Bishop Gorman where he won 4 consecutive state titles. He is considered an athletic combo guard. He has struggled with his scoring efficiency (career 36% from the field and 28% from deep) although he has made 3/7 (43%) of his three-pointers this year. He has averaged less than 7 MPG in 3 games played so far this season.

Daniel Begovich - #21 Senior 6'5" Guard - San Francisco native is a deep bench guy who has played a total 13 minutes in 3 seasons with the team. He spent two seasons as a manager before walking on and earning a roster spot. Excellent student majoring in economics.

Neal Begovich - #0 Sophomore 6'9" Forward - San Francisco native is the younger brother of Daniel (immediately above). He is a deep bench guy who only has 3 minutes this season (9 combined minutes in the previous 2 seasons [he redshirted a year]). He has only taken 3 shots in his career and made all of them.

Keenan Fitzmorris - #12 Junior 7'0" Center - Kansas native is a deep bench big who has only appeared in 18 games in his career (with limited minutes in those games). His sister is on the Stanford volleyball team. He is a good student, pursuing a degree in psychology.

Jarvis Moss - #3 Freshman 6'4" Guard - North Carolina native is a deep bench guy who has appeared in just 1 game (3 minutes) so far this season. He was a highly productive player in high school (averaging 26 PPG). He was a McDonald's All-American nominee.

As stated in the "Intro" section above, this report's film study is not based on having viewed any Stanford game in its entirety, but instead piecing together clips on YouTube from all 4 of Stanford's games. 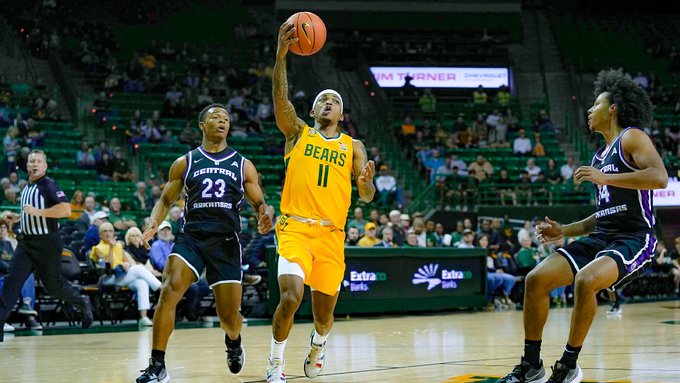 This will Baylor's toughest test yet. Sure, that is not saying a whole lot considering the competition they've faced thus far. Still, it will be important that the Bears continue to improve before the Battle 4 Atlantis next week. Stanford is long, experienced, and deep. Fortunately for Baylor, the Bears are also long and deep. We will see if the Cardinal's experience pays dividends. The key for the Bears will be limiting Stanford's second-chance opportunities (they average 12.5 ORPG). At the end of the day, Baylor has more talent, better coaching, more athleticism, more confidence, and home-court advantage. I see Scott Drew trying to speed up the tempo to wear down the slower Stanford players. The game will be close for the first 25-30 minutes, Baylor will add a little cushion, but the Cardinal will battle back somewhat. Baylor will defeat Stanford 84-75.