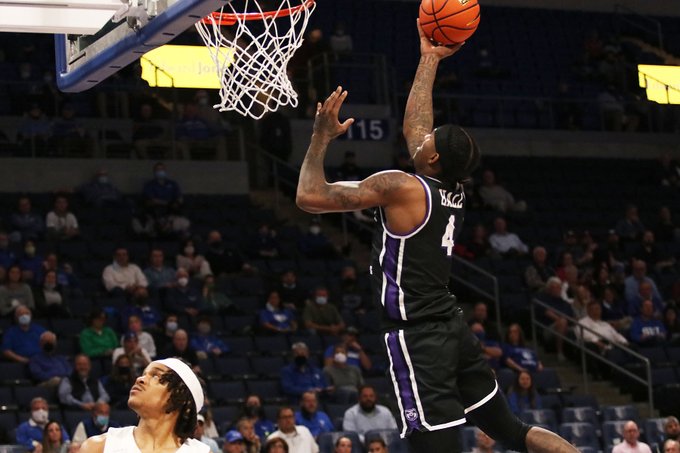 Confession time, in my initial post, I provided a fun fact stating that Baylor MBB would open its season with 3 consecutive games against Southland Conference teams. I had overlooked (and have since corrected) that UCA is in its inaugural season in the Atlantic Sun Conference (ASUN). UCA has spent the previous 15 seasons in the Southland. I guess conference realignment isn't just for the big boys after all. Also, this is the third game in six days which is a great way to install some adversity for our guys and to test their conditioning and depth. It also means that I have had less time to prep this scouting report than either of its predecessors so if the quality is shoddy, please blame the scheduler first and me second.

In my last post, on Nicholls State, I dramatically underestimated Baylor's offensive explosiveness and overestimated the Colonels' ability to keep it close with their aggressive defense. Of course, if I am going to be wrong on any of the predictions, I hope that it is because Baylor outperforms my expectations, as they did on Monday.

After spending the last decade-and-a-half in the Southland Conference (with limited success, 106-241 combined record over the last 12 years with only one winning season in that span and no NCAA tourney appearances), the Bears of Central Arkansas are embarking on a new adventure this season with it being their first in the ASUN Conference. Fun Fact: NBA Hall of Famer, Scottie Pippen, who has been in the news quite a bit lately taking shots at Michael Jordan, is among the program's most famous alumni. Despite losing the team's leading scorer (Rylan Bergersen transferred to Eastern Washington) and 3P shooter (DeAndre Jones transferred to Saint Louis), the Bears bring back quite a bit of experience and firepower from last year's squad including Cooper and Kayouloud (who both averaged over 10 PPG a season ago).

Anthony Boone - Head Coach - 2nd Season as HC (last season he was interim HC) and 8th with the program. He was an assistant coach with Murray State, Jackson State, Grand Canyon University, and the Phoenix Mercury (WNBA) before arriving at UCA. He played for Ole Miss, leading the team to back-to-back 20-win seasons for the first time 60 years. Despite needing 4 knee surgeries in college, he started 79 of 94 games with the Rebels and had his jersey number retired. Fun fact: Coach Boone joins Archie Manning as the only other athlete in Ole Miss history to have his jersey number retired. He received a bachelor's in chemical engineering and a master's in mathematics from Ole Miss.

Camren Hunter - #23 Freshman 6'3" Guard - Arkansas native is the team's leading scorer through the first 2 games (averaging 12 PPG). He is a 3P specialist (70% of his field goal attempts are three-pointers and he has made 43% of them this season). Prone to freshman-mistake turnovers.

Collin Cooper - #14 Junior 6'2" Guard - Arkansas native only played in 9 games last season after missing the first part of the year recovering from off-season surgery. He is a career 34% 3P shooter although he was significantly better than that last year. When he has the ball, he is usually hunting his shot.

Jaxson Baker - #34 Junior 6'7" Forward - Native of Phoenix, Arizona is a 3P specialist on the wing (71% of his career field goal attempts are from beyond the arc, he hits 33% of them). Horrible efficiency on 2PFGs (makes just 23% of them in his career).

Darious Hall - #4 Senior 6'7" Forward - Arkansas native started his career with the Razorbacks before spending the last 2 seasons with DePaul. Relatively inefficient scorer (42% from the field and 29% from deep). Active rebounder and defender.

Jared Chatham - #24 Senior 6'7" Forward - LA native is in his 5th season with the Bears. He started 22 of 24 games a year ago and has appeared in 107 career games. He was the team leader in rebounding last season. He has very limited range and is not particularly efficient, especially for a guy who scores most of his points near the basket (career 46% from the field).

Ibbe Klintman - #1 Freshman 6'8" Forward - Swedish native attended high school in Scotland. In the first 2 games this year, he has had very little impact in his 17 MPG. He is 2/6 (33%) from deep so far and both made field goals on the season have been three-pointers.

Eddy Kayouloud - #13 Senior 6'7" Forward - Native of Paris, France attended Oak Hill Academy (in Virginia). Fun Fact: Oak Hill has produced a multitude of NBA greats such as Carmelo Anthony, Kevin Durant, Rajon Rondo, among many others. In his first 3 seasons with UCA, he has appeared in 86 games including 62 starts. He has averaged over 10 PPG in his career and is a formidable rebounder and decent defender as well. He is a versatile scorer (only a third of his field goal attempts are three-pointers) and fairly efficient (45% from the field and 33% from deep).

Elias Cato - #25 Freshman 6'8" Forward - Native of Queensland Australia attended Sunrise Christian Academy in Wichita, Kansas (teammates with Baylor's Kendall Brown and Baylor 2022 commit Dillon Hunter). He has made the most of his 19 minutes of play thus far this season, averaging 14.7 points, 6.3 rebounds, and 4.2 assists per 40 minutes on 75% from the field.

Vincent Reeves - #11 Freshman 6'5" Guard - Alabama native has struggled to contribute much in the first 2 games of his career despite playing 13 MPG.

SK Shittu - #0 Senior 6'9" Forward - Arkansas native has appeared in 82 games through his first 3 seasons on campus (11 MPG). He is a low-volume (3 field goal attempts per game) medium-efficiency scorer (43% from the field) with soft touch. Productive rebounder.

Jonas Munson - #21 Sophomore 7'0" Center - Virginia native is a deep bench guy who has only averaged 4 MPG in the 18 games he has appeared in between last season and this one.

Brendan Simmons - #20 Sophomore 6'2" Guard - Arkansas native is a deep bench guy who has flashed (in a very small sample size) some nice scoring efficiency 16.7 points per 40 minutes on 63% from the field and 67% from deep.

Lewis McDaniel - #2 Sophomore 6'3" Guard - Tennessee native took a medical redshirt last season and has not yet appeared in a game this year. As a freshman, he appeared in 22 games (9 MPG) and struggled mightily.

Masai Olowokere - #5 Junior 6'5" Guard - Brooklyn, New York native is a deep bench guy who has not appeared yet this season. In his first 2 seasons, he has appeared in 42 games (11 MPG) and has showed off his abilities as a 3P scorer (40%). Fun fact: He is the nephew of NBA player, Udonis Haslem.

Trey South - #22 Sophomore 6'3" Guard - Native of Spring, Texas (near Houston) is a deep bench guy who has not appeared in a game yet this season. He played in 6 games a year ago (less than 3 MPG) and was not effective. 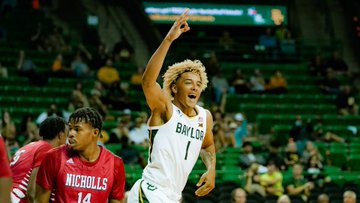 Baylor should be prepared for UCA to punch them in the mouth early. Weathering the storm and maintaining focus and ball security will be paramount. All in all though, I do not expect this game to be particularly close and could be one of Baylor's biggest blowouts of the season. Jeremy Sochan will continue to look like an All-American candidate as Drew's Bears pound the paint early, setting up kick-out three-pointers later in the game. Baylor will dominate the glass and will use second and even third chances to bury the purple Bears. Fun Fact: Baylor is 3-0 against UCA all-time (all meetings happening in the last 4 years), with the average margin of victory being 40.7 points. Baylor will defeat Central Arkansas 96-57.