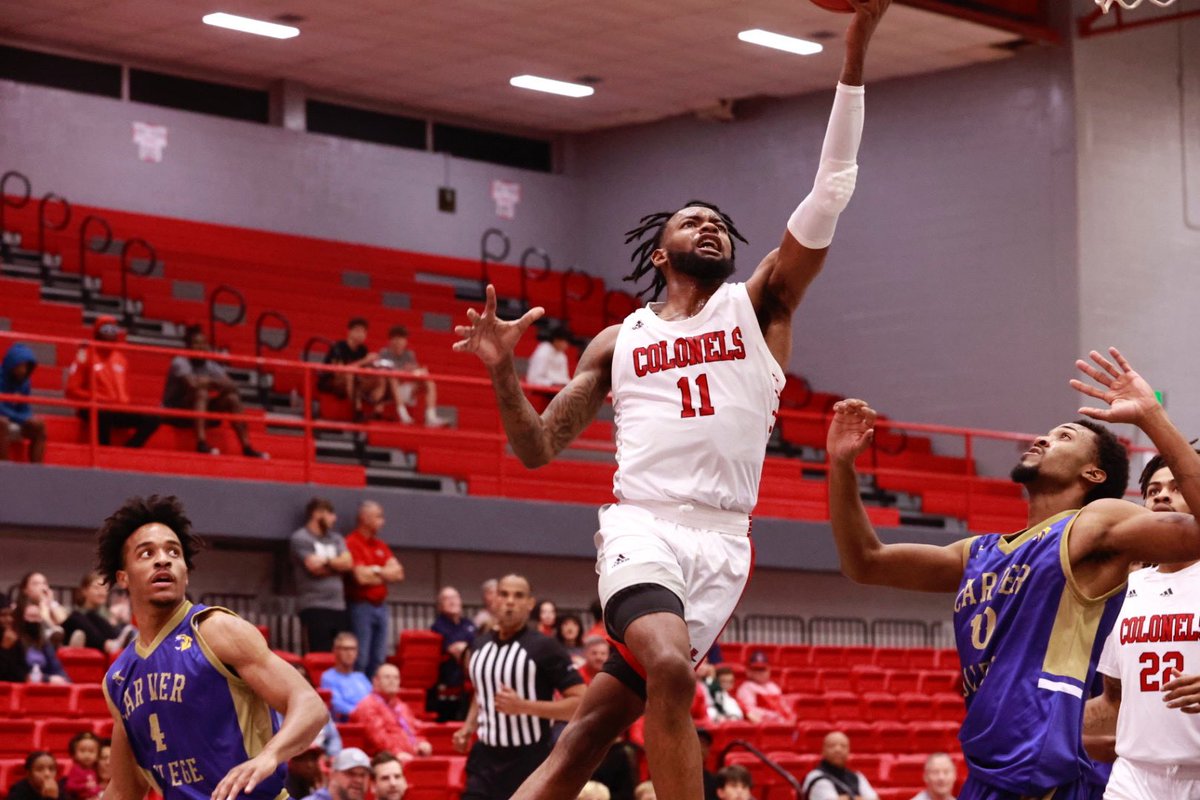 Confession time, I was a groomsman at a wedding this past weekend and so the prep for this team may be lighter than normal. At least the rehearsal dinner on Friday ended early enough for me to watch the Bears' season-opening victory over Incarnate Word. Fortunately, I was actually able to study some film here because the Colonels' season opener was on ESPN+ (UIW's opener was not broadcast on any major network/streaming service).

In my first post, on Incarnate Word, my prediction was pretty much spot on. Baylor was unable to separate from the Cardinals for the first 12+ minutes of the game but pulled away, especially in the second half to win 87-60 (I predicted 83-54). The one thing I got wrong was minutes for the deep bench guys; Dainja, Loveday, and Turner all got 5 or fewer minutes.

* - 2 of the the 3 wins owned by the Colonels this season have come against the Carver College Cougars who are not affiliated with the NCAA in any way (they are part of the NCCAA). The Cougars do play several Division I NCAA teams each year but are non-competitive. This is certainly true of the double-header played against Nicholls on this last Friday and Saturday where the Colonels won by a combined 125 points.

The Colonels joined Division I in 1980 and have been a part of the Southland Conference since 1991. Since becoming eligible for the NCAA Tournament, Nicholls has just 2 appearances in the Big Dance (their last one being in 1998). The Colonels are coming off back-to-back strong seasons (combined record of 38-16 [70%]), including last year when the team won the Southland regular season conference championship (finished 2nd in the regular season standings the year before). Their last campaign did end in disappointment, however, when the team was upset in the championship game of the conference tournament by Abilene Christian, who routed the Colonels 79-45. Fun Fact: Without Nicholls collapsing to ACU, we may not have been able to witness the glory of the Texas Longhorns losing as a 3-Seed in the First Round of last season's magical tourney. A year ago, Nicholls was a better offensive team than defensive (scoring over 100 points in three different games). The Colonels were dead last in the conference in FT% last year, but they were the best rebounding team and were near the top in other statistical categories like assist-to-turnover ratio, steals, and FG%. This may be a bit of a rebuilding year for Nicholls as 3 of the team's 10+ PPG scorers from last season have transferred (Najee Garvin to Hampton University; Kevin Johnson to the University of Illinois-Chicago; and Andre Jones to the University of Louisiana-Monroe). Beyond the scoring that these three losses represented, Johnson was the team's most disruptive defender and Garvin was the team's best rebounder. Additionally, the team's 5th leading scorer from last season, Jaylen Fornes also transferred (to the University of North Carolina-Wilmington). Nicholls had 6 players with at least 400 minutes a season ago and 4 of those players are now gone. The program had to hold team activities in Kentucky after Hurricane Ida devastated Thibodeaux, Louisiana. The Colonels played a competitive exhibition game against LSU (lost by 12) to raise money for Hurricane Ida recovery.

Austin Claunch - Head Coach - 4th season as HC (and 6th season with the program's staff). Fun Fact: Claunch (31) is the second youngest head coach in Division I men's basketball. The Houston native played 4 seasons at Emory where he finished as the program's all-time assist leader. He received his master's degree from Clemson. He was an assistant at George Mason and Clemson before arriving at Nicholls. He has a great reputation for being confident, energetic, and a student of the game.

Ty Gordon - #0 Senior 6'1" Guard - Mississippi native is the team's leading scorer from last season (also led the team in assists). Projects to be the team's starting point guard and number one scoring threat. He started his collegiate career at Troy where he played one season before transferring to Nicholls and having an immediate impact a year ago. He has averaged over 12 PPG in 3 of his collegiate seasons. Decent 3P shooter (34% on more than 6 attempts per game; over 54% of his career FGAs have been 3-pointers). Solid defender and all-around player. Lightning quick in transition and attacks downhill. Conference Newcomer of the Year last season.

Devante Carter - #14 Senior 6'3" Guard - Virginia native is well-travelled, having played 2 seasons at different JUCO programs (Chipola and Odessa), before spending the last two seasons with the Norfolk State Spartans. Since joining Division I, he has filled the stat sheet in a variety of ways (averaging 12 PPG, 5.4 RPG, 3.4 APG, and 1.4 SPG). He struggles from beyond the arc (22% from 3 in his career) but does not take many 3-pointers (less than 1.4 attempts per game; less than 14% of his field goal attempts are 3-pointers).

Latrell Jones - #11 Senior 6'5" Guard - New Orleans native started his collegiate career at JUCO College of Central Florida before playing for the Portland Pilots (WCC) last season. Prone to turning the ball over when asked to make plays with the ball in his hand, he is a prototypical 3-and-D wing who primarily plays off-ball. Decent 3P shooter (35% on 3 attempts per game last year).

Ryghe Lyons - #35 Senior 6'11" Center - Louisiana native was the team's leader in blocks last season. He is a super-senior in his 5th season with the Colonels having played in 25+ games each of the previous 4 years (including a combined 62 starts). Last season, he averaged career highs in field goal attempts (nearly 6 per game), field goal percentage (58%), free throw attempts, rebounds (nearly 6 per game), blocked shots (1.8 per game), and steals (0.8 per game). He is prone to getting himself into foul trouble (15 career foul-outs).

Pierce Spencer - #5 Sophomore 6'3" Guard - Native of Porter, Texas (near Houston). As a freshman, he was a low-volume contributor (playing in 22 games, 14 MPG, and attempting less than 3 FGs per game). A fantastic rebounder for his size (averaging 9.2 rebounds per 40 minutes last season). Most of his field goal attempts last year (56%) were 3-pointers (he converted 33% of them). Brings great energy on defense. Fun fact: His uncle was a three-sport star at TCU.

Caleb Huffman - #4 Senior 6'4" Guard - Native of Broken Arrow, Oklahoma began his career at JUCO Iowa Western before transferring to Central Michigan. Last year, with the Chippewas, he averaged over 13 PPG on moderate efficiency (47% from the field and 33% from deep). Sometimes sloppy with the ball in his hands.

Manny Littles - #22 Senior 6'7" Forward - Alabama native spent the last 3 seasons with the North Alabama Lions (ASUN) where he displayed great versatility on both ends of the court. Last year, he led the Lions in rebounding, steals, and also averaged 9.4 PPG.

Tyrease Terrell - #2 Junior 6'4" Guard - Louisiana native has appeared in a total of 11 games in his first two seasons with the program (51 combined minutes). In that small sample size, he has struggled in his scoring efficiency (34% from the field).

Edoardo Del Cadia - #23 Senior 6'8" Forward - Another member of the well-traveled club, this Italian played his high school ball in England before playing JUCO ball for Cloud County (in Kansas) as a freshman, JUCO ball for Central Florida as a sophomore and junior, and last year with the UNLV Runnin' Rebels. He played in 21 games a season ago (10 MPG) and showed promise as a low-volume, high-volume scorer and solid rebounder. 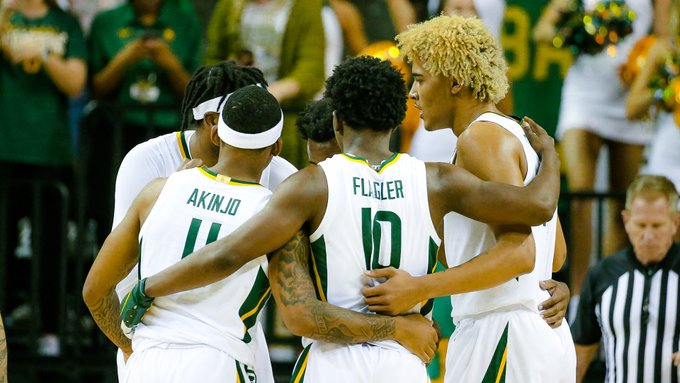 Despite the massive talent disparity, I actually expect Nicholls to keep this one fairly close. The Colonels are well-coached and will force a lot of turnovers and convert some of those into some easy transition points. Baylor's communication and rhythm will continue to look ugly. The good news is that the Bears should be successful on the defensive end and also should be able to get to the charity stripe often. It won't be a barn-burner but will be closer than many expect. Baylor will defeat Nicholls 71-57.