Thoughts on Why You Should Wear Gold to the Sugar Bowl

I can’t make you do it, but you should.

If you buy something from an SB Nation link, Vox Media may earn a commission. See our ethics statement.

Share All sharing options for: Thoughts on Why You Should Wear Gold to the Sugar Bowl

In case you missed it yesterday, our own Peter B. Pope did a great post yesterday announcing Baylor’s efforts to promote a “Gold Out” for this year’s Sugar Bowl against the Ole Miss Rebels, a game in which Baylor cemented a spot by beating Oklahoma State with a game-ending goal-line stand that I did not write the entire second half of this sentence just to reference once again. But since we are here already, let’s take a look at that possession one more time.

Anyway, as Peter mentioned, the reactions to Baylor’s gold-out announcement have run the gamut from full-throated support to outright refusal. While the latter is not at all surprising given that: 1) we have near-daily internecine arguments about what is or is not a school color, and 2) there is a subset of our fanbase that would be better motivated to do something by telling them they absolutely should not do that thing, it is disappointing. But rather than just be disappointed when you don’t wear gold to the Sugar Bowl, I thought I might try to convince you that you should by defusing some of the arguments against and making a few arguments in favor ... other than the fact that Baylor asked you to do it.

Note: I am also not going to take easy way out and say Jalen Pitre wants you to wear gold, but I bet he totally does.

Nobody Cares About Your Color Wheel At a Football Game.

I caught you off-guard by leading off with something about a “color wheel,” right? Well, it is apparently a real thing that people care about in certain contexts, as evidenced by the fact that when I searched for one to use, I found about a million different choices. I even found one you can buy in case clothes-color confusion is something you grapple with everyday. For our purposes here, let’s go with this one, which I chose because it contains my favorite color combination: shade.

Now, I’m not about to go into the reasons why color wheels are a thing or why any of it matters at all in any context because frankly, I don’t really know or care. I wear a lot of greys, blues, and browns at work and a lot of green and gold otherwise. But guess what? You shouldn’t care, either. We’re talking about going to a football game in New Orleans on New Year’s Day at night. Nobody that you see before, during, or after the game will care whether gold matches your skin tone or complements your accoutrements, nor will they probably even remember having seen you at all.

But if nobody cares about your color wheel, why is it important? Great question.

Gold Stands Out In Crowds/On TV.

Set aside the fact that we are the away team for this game due to an arrangement whereby the Big 12 and SEC alternate home sides in the Sugar Bowl in non-CFB Playoff years, and Baylor was the home team (and wore green) the last time we were there against Georgia (with a CFB Playoff year for the Sugar Bowl in 2021 in-between). Did you know that with very few exceptions, football is played on green fields? It’s true, and while green is a great color—one of the two best for football teams to wear, in my opinion—it tends to blend in with other greens, like the green of the field itself.

It is also true that large crowds of people wearing dark colors tend to blend in together, making the fact that they are all wearing the same color less noticeable. Sometimes, this is a good thing; the BlackOUt game in 2013 is one of my favorite Baylor football games ever to have attended. But that is the exception, not the rule, and the reason fans and teams/programs like wearing bright colors is that they stand out. Ole Miss, for example, is wearing all red and encouraging their fans to do the same. And Baylor, in turn, is wearing gold and encouraging us to do that.

Don’t believe me that gold stands out in crowds better than other colors our fans typically wear? Below are two different images from two different games in two different seasons, one during the day and one at night, taken from more or less the same spot in McLane Stadium. 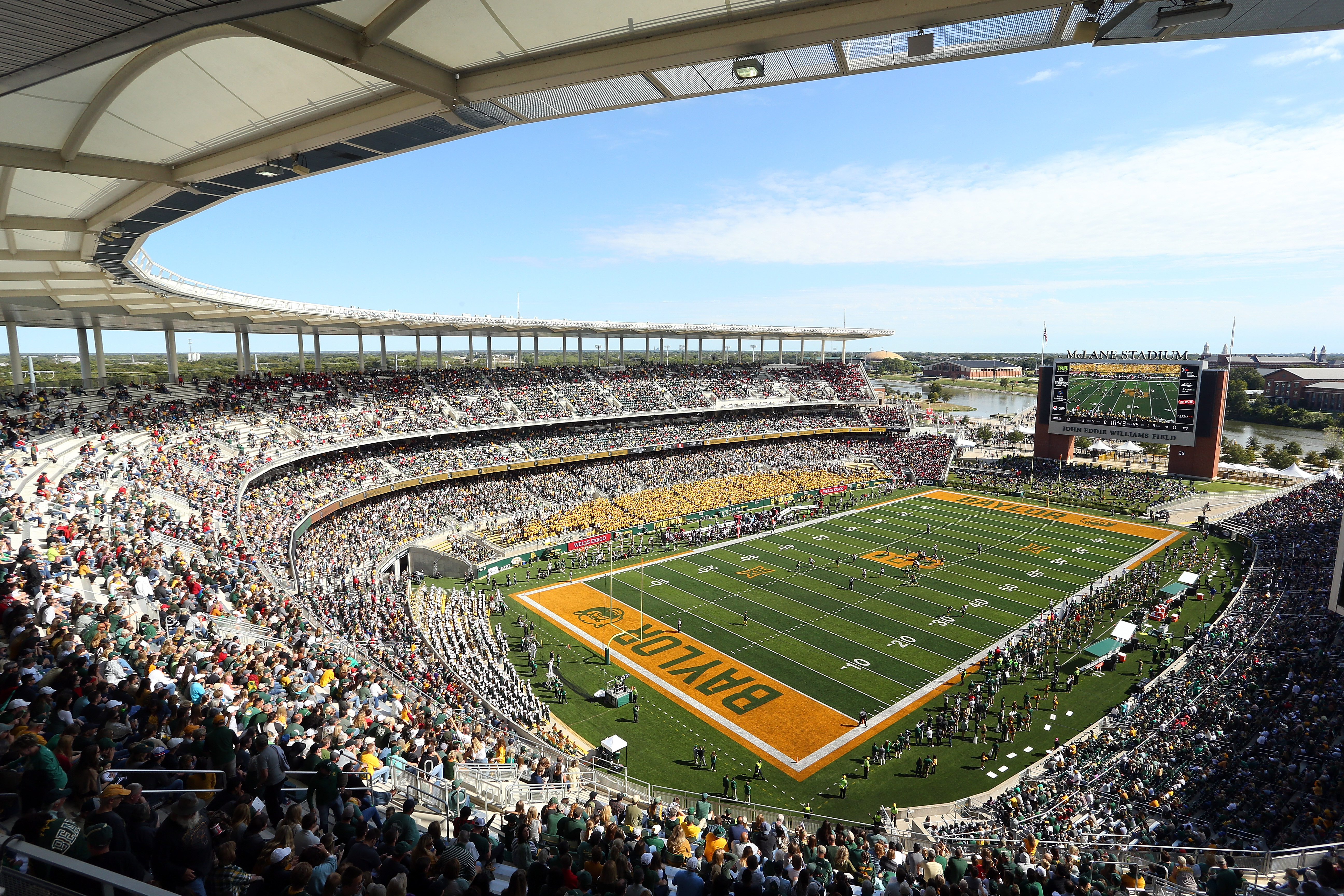 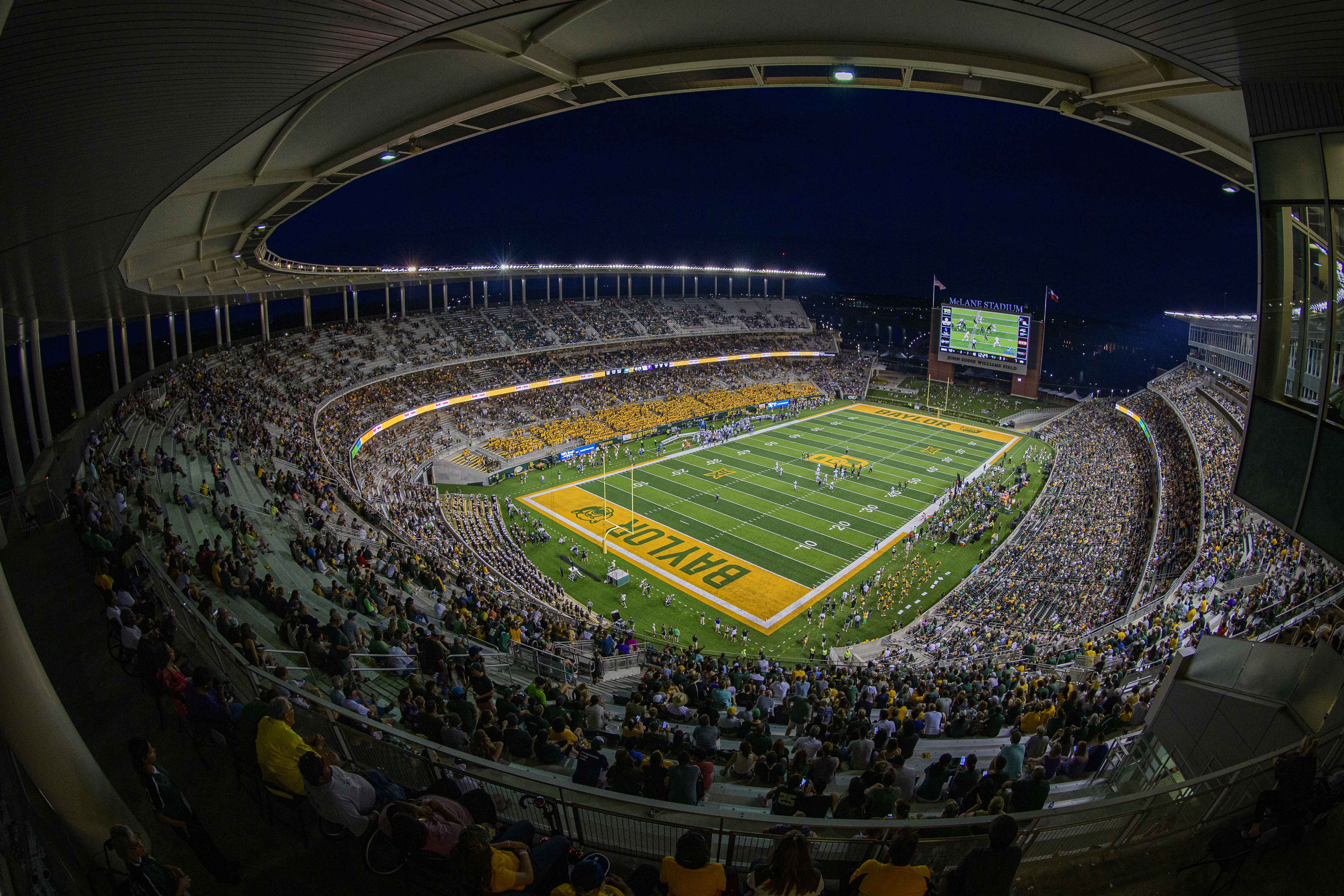 You see what I’m getting at here, right? Focusing just on the crowd, who stands out the most in this picture? The Baylor Line, a unified sea of gold that both blends with itself and stands out from surrounding colors. This will be particularly important in the background of a night game inside a dome. In fact, the gold stands out even more in the night game above.

Also, just so we’re clear on something and since I just found this image:

But, you say, our gold merchandise stinks!

Gold Options Are Better Than Ever, and Baylor Is Working On It.

If we’re being honest, this is probably the most legitimate point I can think of why you wouldn’t want to wear gold: our gold options haven’t historically been the best. Thankfully, things are looking up in this area, and Baylor, for one, has heard your pleas.

In case you thought this was only one hoodie, it isn’t! The Bookstore now has dozens of different gold options, including several hoodies, a Sugar Bowl t-shirt, a conference championship t-shirt, long-sleeve Bear Head t-shirts, long-sleeve performance t-shirts, etc. that seem to have been made available online-only to fill this exact need. And just in case you think I’m getting kickbacks from the Bookstore (I’m not), they’re not the only ones. Rally House has a ton of gold options, as does Fanatics, and, to a lesser extent, the Big 12 shop (which is a thing, apparently?), Amazon, BaylorBears.com, SicEm365, and Academy. Even our friends at Homefield can meet your needs, assuming those needs involve one of two t-shirts. The point is that you have options for gold Baylor merchandise you probably did not have before.

Before going any further, I want to address two things. First, if my links above skewed towards men’s clothing, I’m sorry for neglecting you, ladies. I tried to find gender-neutral links where I could. The reality is that, unfortunately, there is more college-branded gear for men than for women, for the most part. Second, recognizing my own limitations in the field and in part to address the prior point, I asked our own @BaylorEtta to assist in identifying non-branded gold options out there in case some of our fans would prefer to go that route. Because I could not import the images she helpfully included, her complete submission is available here, and be sure to thank her on Twitter for helping us out. I won’t spoil it.

Hold on, what was he looking at?

In the end, the best reason, aside from (hopefully) welcoming back Gerry Bohanon, to wear gold to the Sugar Bowl remains...

The Big 12 Champion Baylor Bears Asked You To Do It.

Put aside your aesthetic concerns, your worries about whether this gold is the right gold, your frustrations with the merchandise offerings, your hesitance to wear gear with logos on it, or your refusal to do what Baylor asks you to do clothing-wise, and wear gold. It doesn’t matter if you’ve worn the same shirt for the last 42 seasons, or you don’t think it looks good on you. Be loud, be proud, and wear gold.

Because you know who gets gold? Winners.