In many ways, Saturday’s passing offense was closer to what we’ve been used to in past seasons, including quick strike touchdown throws, minimal time of possession, and efficient production across the field. The game left me exhausted, but I loved seeing our Bears play their hearts out and put the game away in the fourth quarter.

IZ. What a return to the field for Ish Zamora! 7 catches on 9 targets, and four of those went for 32 yards or more. With KD hobbled, Russell found a new go-to receiver, and Zamora did not let him down. The double move that pushed the ball up field on the 99 yard drive was a thing of beauty.

Russell. I’m not sure that I ever really thought that Russell would need to play his way back into the game, but I’ve since reconsidered. Each game he looks more comfortable, is making better throws, and takes a step closer the quarterback the lit up the scoreboards last year. I’m still not sure he’s all the way back, but I think that he will be by the time we go to Texas and start the hard work of this schedule.

Since some ODBers still worry about his accuracy, let’s look at his 10 incompletions:

I should note, that in addition to the one interception, there were two other throws that were close to being picked; one was a swing pass to Williams that made me wince. There was also that high bullet to Hawthorne that ended up in Zamora’s hands--not even sure what to say about that (except, perhaps, thank you).

Bombs Away. 4 for 8, 197 yards, 3 touchdowns. The deep ball did everything except control the clock for us on Saturday. Don’t know about y’all, but I loved seeing the vertical routes open up again. Lord knows OSU put enough people in the box to give us one on one coverage—and Russell and company took advantage when it mattered.

Yards per Catch/Attempt. Both stats skyrocketed this week. Like it, love it, want some more of it. OSU coverage packages often denied those short 7 yard throws we feasted on in the first three games, but the production downfield was tremendous.

Red's Batting Averages. Our receivers came through this week (here's looking at you Chris Platt). 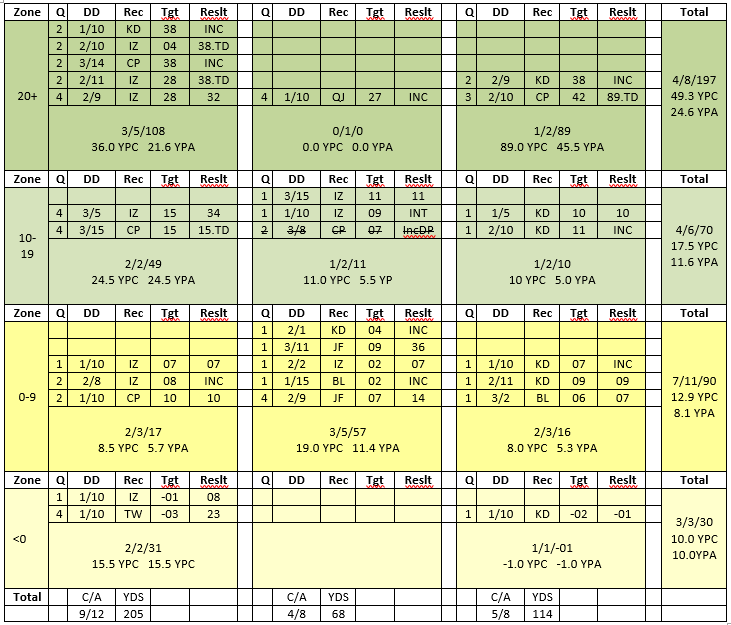