Let’s start with this: Seth Russell had a good game: 22 for 38, 337 yards, 3 touchdowns and one interception. He was accurate, made good decisions, and hit the deep ball, but received very little help from any receiver not named KD Cannon. No, the numbers weren’t video-game-like, but neither did he have the poor passing game that some claim to have seen.

The Receivers. How about a little help guys? Chris Platt and Blake Lynch are young, talented, fast and . . . still in development. Here’s a glance at the receivers:

Once you start looking at the actual throws and decisions, they show a quarterback getting the ball in the receivers hands. Only found four balls that I'd really criticize, the others were either good throws or reasonable decisions.

Da Bomb. How good was it to see Russell and KD doing Baylor things? I want an artillery piece at McLane that only fires when KD makes a grab for 20+ yards. It would have gone off three times, four if you take the catch and run for his second touchdown. Successfully pushing the ball downfield is essential to Baylor football, and both Seth and KD were in good form. Now we just need someone to create the threat on the other side of the field and make defenses pay when they start double-teaming Cannon.

Balance. It’s just interesting to note that we spread the ball around the field more evenly this game. Russell/KB/Grobe, whoever it might be, is looking for Platt or Lynch to emerge as a consistent threat to balance both the field and Cannon. We’re not there yet, but it’s not for want of trying.

Let’s be Hasty. Did you enjoy seeing Hasty as a receiver (2/3/26)? I’m dying to see Hasty on a wheel route. With that speed he’d be one heck of a hard matchup for a linebacker. Do you remember the wheel against Texas in the iced-over Case? I remember almost falling out of my chair. Hasty looks great running the ball (he has that same energy that Shock brought to the OU blackout game), but he also looks to have good hands.

Redbeard's Chart. Red was interested in a "batting average" for the receivers by game, so I did one on the fly. The first number is times targeted, the second is success rate. 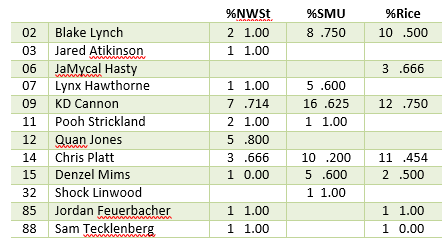 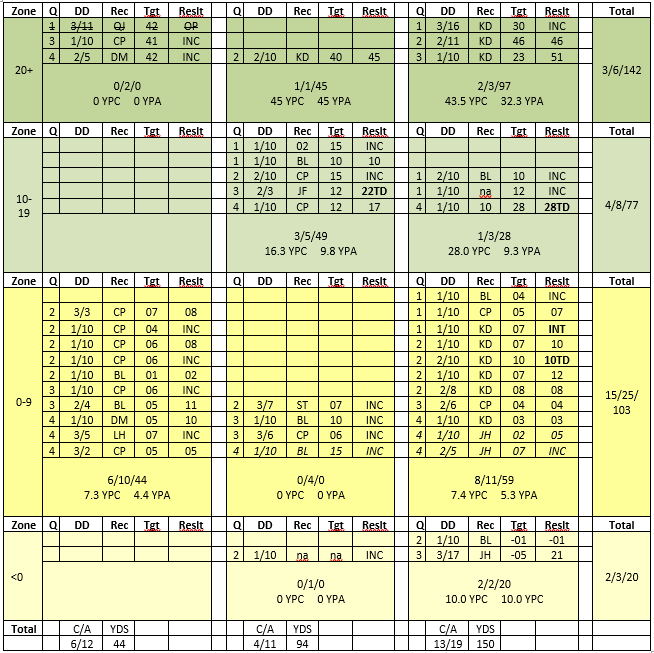