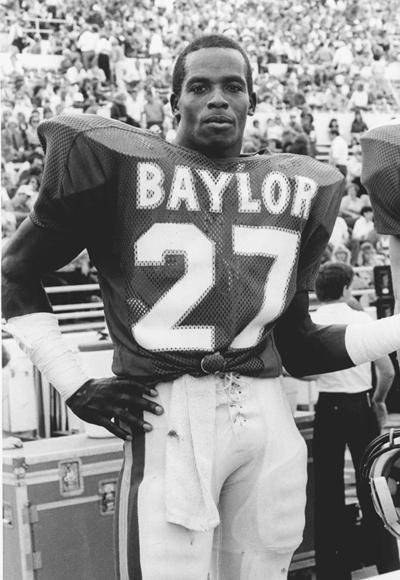 It's time for week 2 of the Baylor Awards, where I honor the top Baylor players (Corey Coleman) who played the best (Corey Coleman) and deserve accolades. (Corey Coleman) I thoroughly enjoyed the game on Saturday, but unfortunately I was not able to re-watch the game due to my lack of DVR and it not being on the internet. Get on it people! That makes it especially hard to analyze defense and line play, but I'm going to give it my best shot. If you missed week one, here it is.

Holy Crap Corey Coleman!!!!!!!!! For the second week in the row, he has not only looked like the best player on our team, but possibly the best receiver in the country. He has been a revelation, and we thought he was great to begin with. Here's some season statistics for you, 5 Touchdowns, 360 Yards, 1 Million Fire Emojis. Is anyone else THRILLED with our running backs this year? It legitimately feels like we could start any of the 4 and get a thousand yard guy. That said, Shock Linwood still feels head and shoulders above the rest. He's fast, tough, and keeps runs alive without going backwards. I might be in love. And finally, the Baylor Line is the first non-player to ever compete for the RG3 Award and their performance has certainly justified their ranking. They stayed all four quarters against a FCS team in a thirty five point win. They've embarrassed other Lines. (mine included)

I'm a Jay Lee homer. There I said it. That said, he's making it really easy for me to be one and that's wonderful. The fifth year senior seems to be one of Seth's favorite targets and he's racking up the stats this year. I feel like a proud dad who's three years younger than his son and has taught him nothing.

I've found out the key to Shawn Oakman's success. When he plays, he's really good. It's that simple. He's a force. He might actually be genetically mutated. (See Jurassic Waco) But my absolutely favorite thing that he does is instill fear. He's a disruptive force by being on the field in a way few people on Earth are, and I love it. I LOVE it. The criticisms of our secondary are a little overblown and I love to point to the jewel that is Xavien Howard as a counter argument. Guy can flat out play cornerback. He has great on ball skills and as far as Baylor's cornerbacks go, he remains fairly clean on pass interference calls. Finally, Andrew Billings gonna Andrew Billings. Dude is a monster. An absolute monster. Quarterbacks have nightmares about Shawn Oakman, but Offensive Coordinator's nightmares are about Andrew Billings.

Johnny Jefferson is fast. Very, very, very, very fast. I like that very much. Very, very, very, very much. His 46 yard touchdown run was a thing of beauty because all he has to do is make one person miss and then he is fast enough to leave everyone else on Earth in the dust. Terrance Williams is a fun, powerful runner. He also embodies the term downhill runner. I didn't know people could like they were falling down for twenty yards until I saw him do it four times. And finally, pray, pray, PRAY for a healthy Devin Chafin. Gives our backfield a whole new dynamic.

Not a very deep night for our receivers. So I'm just going to take this time to talk to Lynx Hawthorne. Get a tighter chinstrap, or a tighter helmet, or whatever works. Please. I'm so scared for you. I get that you want to show off your wavy locks and who wouldn't, they're magnificent. But please don't die at the cost of your hair like a modern day Samson.

Remember when LaQuan almost caught that pass... that would have been dope.

I'm going to be honest with you... It is soooo hard to analyze line play live and I haven't been able to watch a replay. Please post it. So I'm not confident in these rankings apart from Drango. Drango has been dominant in pass coverage on his way to an All-American campaign. I also admire our run blocking this year. Finally, the snaps were much improved from this week to last week so Kyle Fuller gets on the board.

Sorry Daryl Gardener, Santana deserves the name more. Beau Blackshear is so freaking consistent. I believe he could be a rotation defensive lineman in the NFL for five years. He's solid in the pass rush and good in run defense. I love him... I mean I like him. It would be weird if I loved him right.

I think Grant Campbell is the truth. He is a very capable tackler, who seems to take to half-time adjustments better than almost anyone. Aiavion Edwards was around the ball all night, and it paid off with a key takeaway. Finally, Raaquan Davis is a good player, but I would still like Taylor Young to be back. He is vital to our pass rush and our linebacker depth. Please stay healthy Baylor players.

My personal belief is that Travon Blanchard has been doing a superb job at the bear position that is the unique marker of a Phil Bennett defense. That is so key to our success. It was good to have Orion Stewart back. He just provides stability and talent to our defensive backs in a vital way. So nice to have him on the field. Honorable mention to Chance Waz for immediately being an improvement as a freshman.

I love touchbacks, yes I do. I love touchbacks, how 'bout you? Spencer Evans has a LEG, and it is a great relief for our special teams coverage units, which don't have a great history. Chris Callahan is a steady performer from forty yards in and that's comforting in a way we need to appreciate. Drew Galitz is everything we could have hoped for as a true freshman.

Here's a little hint... Art Briles is always going to be number one barring some horrible circumstance. Jeff Lebby filled in capably as play caller in the unfortunate circumstance. Finally, Phil Bennett made excellent second half adjustments again, but letting an FCS team drop thirty one points on you is not the key to my heart or the Grant Teaff Award, Mr. Bennett.

Who do you believe should win the RG3 Award?