When you hear praise about The Great Coach Art Briles you usually hear phrases like "QB Whisperer" and "Wide Receiver University" both referring to his spread out high flying passing game. You rarely hear praise of the Baylor running game except in conjunction with the offense as a whole. Well, this post is to tell you about a new catch phrase, Briles the Builder.

I'm sure everyone has heard the stories of how TGCAB has built up the football programs of every school he's ever been at, starting at the bottom and landing at the top. How he's not only built a national contending football program at Baylor but also new athletic facilities, practice fields (both indoor and outdoor), nutrition center, $300Million dollar on campus football stadium.... Today, right now, I want to talk about Briles, the builder of running backs. I figure that the best way for me to do that is to start off by telling you about how a few of the running backs themselves performed while at Baylor, along with some team rushing statics as well. When I first saw Terrance Ganaway in a Baylor uniform I thought to myself, who is this guy. Well, turns out he played his freshman year for The Great Coach Art Briles in Houston and then followed TGCAB to Waco, TX and Baylor University. In his senior year at Baylor University, he rushed for 1,547 yards, straight up the middle at an average of 6.2 yds per carry, while scoring 21 touchdowns along the way in helping the Baylor Bears finish with a 10-3 record which included a 2011 Alamo Bowl victory. The total team rushing yards for the 2011 season was 3,063 with 37 rushing touchdowns. About TGCAB, Ganaway has this to say, "Coach Briles is a visionary and gets people to see the way he sees. Coach Briles recruits players who aren't necessarily getting a lot of looks from big schools. He does what's best for the players and puts their best interest first." Here's a gif of one of Ganaway's five touchdown runs in the Alamo Bowl.

Lache Seastrunk averaged 7.6 yards per carry while at Baylor. Here's a gif of Seastrunk's 80 yard touchdown run against then No. 1 ranked Kansas State. 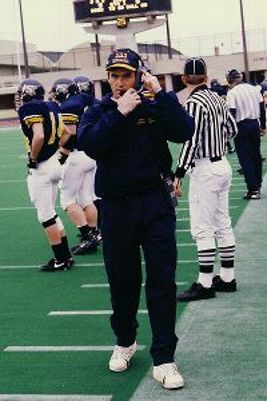 In his first college coaching job, TGCAB was the running backs coach in Mike Leach’s Texas Tech Air Raid offense and increased the running game average from 66.4 ypg in 2000 to 99.6 ypg in 2002. In an offensive scheme almost totally dependent on the pass, that is a pretty impressive stat.

In the seven years that TGCAB has been at Baylor, his teams have rushed for an average of 2,622 yards per season. Over the last four years the average is 3,063 rushing yards per season. TGCAB knows how to build great running backs. Baylor Fans are now in for a very special treat this season as TGCAB returns a trio of well developed, strengthened and conditioned veteran running backs. For more information on these three Briles Built Running Backs, as well as who is coming up in the ranks behind them, read Mark Seymour’s article, Baylor Football 2015 Position Previews: RBs. See also this FanPost by RyanParkerTX: The Vengeance of Shock Linwood

(Note: You might need to run your cursor over the above gifs to make the animation start.)

Which Briles Built Running Back is your favorite?